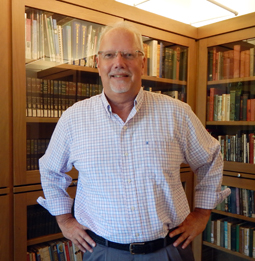 Richard Anderson spent a considerable amount of time in Boca Grande beginning in 1988, when he worked as a planner for Lee County. When he first arrived on the island, he met Robert Johnson, the harbor pilot for Boca Grande.

“That was back when Florida Power and Light used to be powered by crude oil. There were oil tanks at the southern of end the island, and oil tankers literally from all over the world would come here and offload their oil. Capt. Johnson led that project,” he said. After FPL switched to natural gas, all the fuel came by pipeline.

Anderson worked on getting the permits completed for the FPL project for the next several years. He also worked with the wetland mitigation committee on the mangrove replacement project for several businesses and homes on the island.

Richard’s strong passion in local preservation and planning issues led him to pursue a political leadership role recently. He is running for Lee County Commission, District 3. The primary is on Tuesday, August 30 and will decide which candidates will be on the upcoming ballot.

“The number one thing local leaders are going to be judged by in the future is greenspace,” Richard said. “There needs to be an active plan in effect now. If you picture two cars for every one on the road right now – that’s going to be an awful mess.” He added that the infrastructure isn’t going to get any better; it’s going to get worse with more pressure and more people. “Our area is so based on growth – our economy and real estate – we’ve got to do something soon, or else we’ll start to run into much bigger problems in the near future.” Richard grew up in a suburb of Chicago. He attended Drake University, then went on to Northern Illinois University, where he earned a master’s degree in education and urban regional planning.

He first came to Boca Grande with his parents when they began vacationing here in the 1950s. His love for the area brought him back here to live permanently. “I always knew I wanted to live here,” Richard said. And so he did. Right after college, he moved to Bonita Beach, the same area his parents moved to when they retired. Soon after moving to Florida, he started teaching ecology, geography and earth science at Edison Community College, which is now Florida SouthWestern State College. Shortly after that he got a job with Lee County as a principal planner in 1980.

“That was a time when the State had mandated local governments to do comprehensive planning. And so my team wrote the Lee County Comprehensive Plan, which was sort of a blueprint for growth management,” he said. He recalls receiving an application for a condominium tower and a 750-car parking lot on Lover’s Key. Back then, Lover’s Key was privately owned. “During the review of that project, I wrote a zoning ordinance for Lover’s Key requesting to rezone it as preservation. It was a time when we were just starting to understand the science of shifting beaches and coastal ecology, and also the value of mangroves,” he said. He got involved in writing the first mangrove ordinance in the state of Florida and one of the first bald eagle ordinances in the 1980s. Richard worked for Lee County for seven years and then accepted a job with WCI properties in 1987. While working there, he planned and permitted the town of Gateway in Lee County. Then in 1995 he went to work for Mariner Properties, one of the oldest real estate development companies in Lee County. He was on a team that designed and permitted a 5,000-acre restoration area on Little Pine Island. The restoration was done to create a wetland mitigation bank. “That was an innovative project, because it was mostly private dollars that were used. It took 20 years, but we completed the project. It was one of the best things I have ever been involved in,” Richard said.

The same year, he became involved with a preservation group in Lee County called Conservation 20/20, an environmentally sensitive land acquisition and stewardship program. He wrote the ballot language for Conservation 20/20 during the mid-1980s. “The program has been extremely successful. And now here we are, 20 years later, and it’s back on the ballot.” He has seen the population double twice in his 40-year career in southwest Florida. He developed a course at FGCU 14 years ago called, “The Economics of the Environment.” Richard said, “Our economy depends on the people who come here. And when there is dead seagrass and dead fish and brown water, people don’t come.” So Richard is hoping to represent the county on the issues he is passionate about. “Since most of my career has been in business, I know that in order to get something done you have to develop relationships, and if something can be good for both sides, you can get a deal going,” he said.

Transportation is another issue that Anderson feels needs to be addressed by political leaders sooner rather than later. “When you exceed a million permanent residents, you have to look at the transit situation and plan accordingly, so that there are completed streets where people can bike and walk to work and other places.” Anderson said he was never really interested in pursuing a political career in the past, but having grown children and grandchildren made him begin to think more about future generations. “

Florida is such an incredible and unique place. It’s so much more productive and different than the rest of our country. Our subtropical weather makes for a very different climate classification. The amount of protein that comes out of our estuaries is amazing. And all of these things translate into jobs and a growing economy – but only if we protect it.” Richard feels that his career has been a good preparation for his decision to become a candidate for the upcoming election. “My entire professional career has been in Lee County, from age 23 to 63,” he said.

Richard met his wife, Andrea, shortly after moving to Florida. They have four children: Scott, 30; Erica, 33; Rachel, 21 and Robby, 25. They also have two grandkids: Emilio, 4 and Lucia, 3. Rachel is currently a college student, and Robby works on the family farm in Nebraska. Scott and Erica are both living in New Orleans. “Scott sort of took after me and earned a degree in environmental studies at FCGU, and he is working on coastal restoration projects in Louisiana,” Richard said. Erica manages a nonprofit organization in Louisiana. Richard and his wife are avid campers and spend a lot of time at Cayo Costa State Park during the winter months. They also enjoy boating and hiking on Lover’s Key. “But lately our main hobbies are spending time with the grandchildren,” he said. Richard and Andrea also enjoy traveling to Nebraska to visit her family’s 2,000-acre wheat farm, and camping up north during the summer months.

They are competitive cooks in the kitchen and have a home herb garden where they grow lemon grass, sage, oregano and hot peppers to use in their competing specialty dishes in the Anderson household. The result will earn the winner the title of “Top Chef.” Richard is hoping that’s not the only “winning news” he gets in the near future.