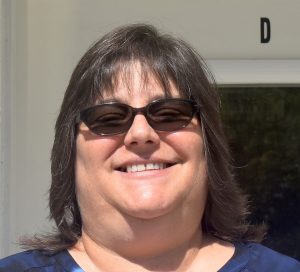 Renee Maines trusts her faith when it comes to making decisions about her next move in life. She has been a teller at Englewood Bank on the island since April, and she’s currently training to be a client services representative at the bank, replacing Renee Lindsey.

Renee has 15 years of banking experience in Southwest Florida.

Originally from Hawthorne, California, her family moved to San Jacinto, Cal., where they lived until she was 14 years old. Then she moved to Kankakee, Illinois with her mother and finished high school up north.

She met her husband, Tony, while attending high school. The high school sweethearts married shortly after graduating and lived in Illinois for a few years before moving to Sherman, Texas.

“My husband’s dad lived out there, and we thought there would be more job opportunities, but as it turns out there weren’t many options at that time,” she said.

They stayed in Texas for about two years and then decided to move to Arcadia, Florida.

“We found out that Desoto Correctional Institution was hiring, so we applied and both received job offers.”

Renee was an office specialist in the dental clinic and eventually became a dental assistant. Tony worked as a corrections officer. During his time as a correction officer, he earned a degree in medical billing and coding and is now working for a doctor in Punta Gorda.

She was with the organization for six years, and then the dental clinic became outsourced as a privately funded business. When that happened, she worked as a secretary for a year for the Department of Juvenile Justice in Fort Myers.

Commuting from Arcadia to Fort Myers every day was getting too costly and challenging, and just as they were thinking about selling their home and moving, along came Hurricane Charley, which demolished their home in 2005.

“The storm destroyed everything. We had to replace the entire thing. It was quite a project,” she said.

Once their home was rebuilt and things returned to normal, Renee worked in the office at a Christian school for a short time.

She found a position as a teller at SunTrust bank in Arcadia and worked there for almost 13 years.

Then she accepted a position in sales in Port Charlotte, but found it to be very challenging and almost impossible to earn a living.

“The summer months were really difficult, and I just couldn’t do it anymore.”

So she returned to the banking business and found a teller position at Wauchula State Bank.

Renee and Tony realized they needed a larger home when two family members moved in with them last year. They wanted to be more centrally located and began searching for homes in the Port Charlotte area last winter. As luck would have it, they found a home quickly, but again, her commute to and from work became an issue.

“To get to Wauchula, it was more than an hour each way, so I started looking closer to home.”

She discovered the Englewood Bank teller job opening in Boca Grande on a job seeker’s website in March, and inquired with Human Resources about a potential internal job transfer. She came to the island to interview with Branch Manager Alison Henderson and was offered the job. She started her new position in April.

Renee and Tony currently live in Port Charlotte. They have one son, David, 29, who lives with them. He is an assistant manager at Dollar General. Renee said he is currently single and available, so visit her at the bank if you’re interested in doing any matchmaking.

The family has four dogs and two cats. Guido is a Jack Russell/dachshund mix, Xena is a Norwich terrior/Chihuahua mix, and Skeeter and Tyler are Yorkies.

The cats are named Tughy and Gideon.

“It’s a very loud household, but they are all very adorable,” Renee said. “Especially when there’s thundering and lightning. There is a lot of barking.”

When she is not working, Renee enjoys reading, playing board games and cooking. One wall of her home is filled with bookshelves where she stores her favorite novels.

“We do a lot of reading in our family,” she said. “And we like having friends over for board games or card nights. I will usually make a main course, and then everyone brings a dish. We have a good time and have some laughs.”

As far as working in Boca Grande, Renee said she absolutely loves it.

“It’s so beautiful here, and the people are friendly,” she said. “I’m very thankful to be here. I enjoy working in a small community with a hometown feel to it.”

She wasn’t very familiar with the island until last April, so she’s been doing some exploring and hopes to bring her family here to visit soon.

As a client services representative, Renee opens up new checking and savings accounts for customers, handles loans and refers clients who are seeking help with trusts and wills to specialists.

“We have a very good trust department, and they do reviews on wills,” she said. “If a client is planning to permanently move to Florida, it’s a good idea to have the existing will reviewed so that it meets the state laws of Florida. Every state is different. It’s better to be prepared for the worst now, rather than be forced to get it done at the last minute.”

Renee said that free trust and investment seminars are planned at area Englewood Bank branches this upcoming season. Explore professional estate planning and investment services to help you make wise financial decisions, so you can be sure you and your family are prepared for whatever the future holds.

“It’s a good thing to be educated and have a plan ready in case something unexpected happens.”

Keep reading the Boca Beacon for updates on those events.

Newer Post‘Wine and Swine,’ anyone?
Older PostStep up and identify yourself, Mystery Person