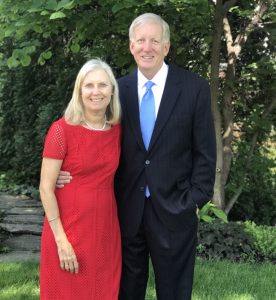 BY OLIVIA CAMERON – family, business, sports and nonprofit work in a partnership capacity was a way of life for Phil Hubbard long before he and his wife Patsy began to winter in Boca Grande.Growing up in a middle-class family in Fairfi eld, Connecticut, sports were a huge part of his life. His interest in sports led him to coach inner city basketball while in high school and to play soccer and tennis in high school and college, as well as badminton.

Phil graduated from Wheaton College in Illinois with a bachelor’s degree in economics and political science. He met Patsy there. Both he and Patsy played badminton.

“I was a fairly good badminton player growing up, and I traveled around Connecticut playing,” he said. “I met Patsy and she challenged me to a game. After playing that day, I distinctly remember going back to my dorm room, calling my parents on the old rotary dial phone and announcing to my parents, ‘I just met the girl I’m going to marry!’ ”

Phil and Patsy married at the age of 22, shortly after they graduated from Wheaton. They have celebrated 46 years of marriage, despite growing up in different family dynamics.

“She grew up in a family of 11 kids, while I have only one sister. You can imagine the differences we’ve had to work out,” Phil said.

After Wheaton, Phil went directly to business school at Northwestern University, getting an MBA in finance and accounting. He became a CPA, working for Touche Ross for four years. From there he moved into the futures and options markets, working for the Chicago Mercantile Exchange and the New York Stock Exchange.

“In 1984 I got a call from a couple of friends in Chicago who had started an options trading partnership,” Phil said. “They asked me to come back to Chicago and partner with them at Chicago Research and Trading Group. From 1984 to 1993 we became the world’s largest options trading firm. We invented a proprietary options mathematical pricing model, which we then took to exchanges around the world. Wherever options were traded globally, we had our traders settled into the trading pits and operated out of offices around the U.S. and the world, including Paris, Frankfurt, Singapore, Hong Kong, Tokyo and Osaka.”

As partner and president, his job was to set up and manage these offices. A good part of his life involved international travel.

“This was the heyday of the open outcry trading pits, where floor traders yelled and screamed, making trades involving millions of dollars,” he said. “We were a young group. Our ‘upstairs’ mathematicians and philosophy majors worked on the pricing model, while our floor traders, mainly ex-football players from Midwestern liberal arts colleges, executed the trades. These Division III athletes were leaders, they were loud, and they had a large physical presence, which is what you needed in the trading pits. I am 6’ 4”, but I was small compared to a lot of people on the floor.”

A number of ex-Chicago Bears even became floor traders. By 1993 CRT had grown to over 1,000 people, and when Nations Bank/Bank of America approached Phil, wanting to buy the company, the partnership decided to sell.

In the winter of 1990, Phil and Patsy were planning to spend some days in Captiva. Shortly before the trip, Phil was reading the local Winnetka, Illinois newspaper, and a brochure about Boca Bay from CSX Realty Corporation caught his eye. He decided to take a look at the new area and the few existing model homes.

Their plan to reach Boca Grande by floatplane was cancelled due to a Florida downpour.

“We didn’t see that beautiful Caribbean blue-green water when we drove across the bridge,” he said, “but by the time we sat down we knew this was the place we wanted to invest in.”

They bought one of the model homes in the North Village in 1991.

“I think we were among the first residents of Boca Bay. I remember sitting across the table at the closing, and the comment was made, ‘When we put together the demographics for Boca Bay buyers, we didn’t have a young family like yours on our radar.’ ”

In the early years, Phil and Patsy only used the home for short school vacations, so they decided to give both sets of parents a place to winter.

“We knew that since my wife and I got along so well, our parents would, too. The four parents lived together until 2007. My wife’s Mom is still active and as sharp as ever at 99. Living here definitely prolonged all their lives.”

In 1995 Phil left CRT, choosing to pursue other priorities. After some prayer and processing, he determined to try to divide his time among three priorities: business and nonprofit involvement, volunteer work, and family, friends and fun. What he discovered was a blending of all three – business and nonprofit colleagues became friends and partners, and even family became involved.

Phil’s business enterprises comprise both “Wall Street” and “Main Street” businesses, whether it is working with top money managers or with his Phoenix business partners and their Dunkin Donuts franchises west of the Rockies, employing over 2,000 people. Even these two business areas are blended. Phil’s Wall Street hedge fund business friend and former tennis pro Richey Reneberg has come to Boca Grande the past several years to play exhibition matches with H Wetzel at the Pass Club and with Phil’s Main Street business partner Bert. He and several former professional baseball players are now not just business partners but friends who also like to visit Boca Grande.

Phil’s nonprofit interest has led him to involvement in a teaching organization that sends teachers to countries in the Middle East and Asia as well as serving on the board of trustees ofWheaton College for 22 years.

“It’s been rewarding to give back to the college after all I received from them,” he said.

Phil’s philosophy of philanthropy has been to identify uniquely gifted people with great vision and then come alongside and partner with them.

“An example is a local couple we met years ago in Laos. They work with opioid- and heroin-addicted men and families in Laos and with human-trafficked women. These men and women work in organic farming as part of the project. They have seen a high rate of success in their work.”

In 2020, after almost 30 years in Boca Grande, Phil and Patsy can’t imagine a better place to spend the winter. A typical day for Phil is tennis in the morning, followed by a business conference call, a check of the markets and the trading statistics, reading hundreds of pages in preparation for a board meeting, a call to his assistant in Phoenix, a beach walk, and best of all, if the children and any of his 14 grandchildren are visiting, ice cream sandwiches after dinner as the grandchildren sit on the deck with their “Papa” and look at the stars. 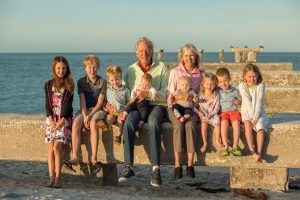