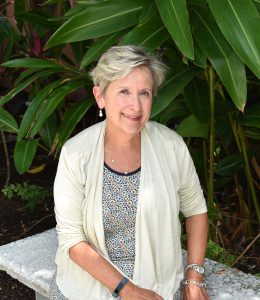 Peggy Seawert knows a lot about how to make things grow. As president of the Boca Grande Garden Club, she has invited some very experienced speakers to come and give lectures about gardening in Boca Grande.

“We bring in people from literally all over the United States,” she said.

One year Laura Bush called and said she had arranged for the White house florist to come and speak.

The lectures are open to everyone and are usually held  November through March at the Boca Grande Community Center.

“In February we always have a guest designer who gives a lecture and then offers a workshop afterward, so it’s hands-on learning.”

The club also offers themed workshops throughout the season, such as holiday design or container gardening.

They also do field trips. This year they went to the Peace River Sculpture Garden. “That was really interesting – it’s a brand new place,” she noted.

In December the club has a big luncheon at The Gasparilla Inn where members do table designs.

In April there is usually a garden tour, but this year because of the 20th anniversary, members held a tea party.

Peggy grew up in Des Moines, Iowa. Her father worked for John Deere, and his career required the family to move every few years. The family lived in Ontario, Canada for a year and then in Moline, Illinois, which is where the company is headquartered. “And eventually we lived in Horicon, Wisconsin,” she said. “It’s where they made lawn and garden tractors.

Peggy attended three different high schools. “It was a lot of moving around, but it really prepared me for college.” Peggy attended the University of Wisconsin and studied American history. “I had lofty ideas that I would work in a museum one day, but there weren’t opportunities to do that after I graduated,” she said.

She found a job working for an employment agency and was a recruiter for 10 years. After having children, she was a stay-at-home mom for a while.

Then she took a part-time job working at Pleasant Company, which released “American Girl” dolls in 1986. The dolls portray 8- to 11-year-old girls of a variety of ethnicities. They are sold with accompanying books written from the viewpoint of the girls.

“I did just about everything at that job … I started out part time and ended up being manager of special events,” she said.

She worked with nonprofit groups raising money for children’s charities. “Our biggest thing was putting together fashion shows. We raised a lot of money for the charities, and Pleasant was always big on giving back.” Rowland eventually sold the company to Mattell.

Peggy then worked for The Artful Home for many years. The online company offers juried art, craft, and design for your home and wardrobe. The items are handmade, one-of-a-kind art.

She worked in merchandising and schematics and tracked what was sold and suggested what should be featured in the next round of catalogs.

“One of the things I found was that people buy more things that are yellow in the springtime,” she said. “But to put math or logic behind that was challenging.”

Peggy suggested the idea of having artists create handmade ornaments, and the idea exploded.

“They were so popular, they take up about half the catalog now,” she said. “They’re affordable gifts, and everyone can always use a new ornament.”

She enjoyed that job because she attended art shows and met the artists. And if the ones she chose were picked for the catalog, that meant a very nice paycheck.

She remembers the first ornament that was a hot seller: It was a little glass pink pig.

“The owner of the company thought we wouldn’t sell any, but we ended up selling hundreds.”

She left that company after seven years to work with a friend who had a business called “The Widget Source.”

She did promotional marketing and dealt with companies to find the right promotional product to communicate their message to their target  audience.

“That was fun – I’ve had some very interesting jobs,” she said.

Peggy’s parents moved to Bradenton after they retired, and Tim’s parents lived in Naples, which is how they ended up in this area.

She didn’t want to live in a big city. “I wanted to be able to look at the water every day. And this is just a little piece of paradise.”

Before Peggy retired, Tim would come down to explore. He was driving by Hacienda del Mar in Placida as it was being built in 2009, and he stopped in to view one of the models. He locked in a deal that day.

Peggy and Tim would split their time between here and Wisconsin, but that changed one day when Tim got on a plane here and landed in Wisconsin where it was minus 10 degrees.

Now they are here about nine months of the year and rent a place in Wisconsin in the summer.

“We love it here; we’re on the intracoastal, and every condo has a view of the water.”

Her mother is 95 and still lives on her own in Bradenton.

Peggy tries to visit her mom every couple of weeks, but much of the time her mom is too busy. “She volunteers at a museum, she plays bridge, and she always has something on her schedule.”

Peggy and Tim attend the United Methodist Church of Boca Grande, so she is involved in organizing the Strawberry Festival every year and the pancake breakfasts.

And she volunteers at programs at the Boca Grande Community Center, but the garden club keeps her very busy.

As president of the Boca Grande Garden Club, she is responsible for planning and organizing all of the programs and events each season.

This year, the club celebrated its 20th anniversary. “We now have a website and an email address, which is a big accomplishment, and we have incorporated the club, which is also a big step. We are in the process of becoming a nonprofit.”

When the club started, it had eight members. Now there are more than 300. Peggy will be president of the club until April, 2019, and she’s already been planning most of the events that will take place next season.

She first became involved with the club in 2014, when she attended a lecture at the Community Center.

All of the speakers for the 2018-2019 season have been booked, and Peggy has been busy planning the garden tour for next year.

She had a large garden in Wisconsin but doesn’t have one at her condo, so that gave her a chance get back into floral design.

She took classes in floral design up north and really enjoyed them. She has done several weddings for family and friends.

Peggy and Tim have two children. Jake is an engineer. He is married and has two children. Emily is a registered nurse. They both live in the Minneapolis area.

Peggy refers to herself as a “serial knitter.”

“My grandmother taught me when I was seven – long before it was fashionable.” Recently she has been working on knitting shawls. She orders the yarn online and knits with a friend every Thursday.

She also plays Mahjong. There is a group of people on the island that get together and play regularly.

To learn more about the Boca Grande Garden Club, send an email to bocagrandegardenclub@gmail.com.

Newer PostHow the flow of water has created what we know as Florida
Older PostObituary: Marilyn Thurner