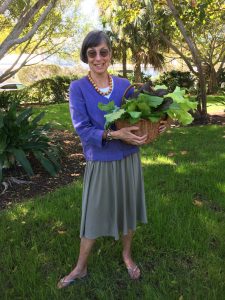 BY MARY BESS – It’s a problem most of us would like to have but, despite what Mae West says, too much of a good thing is not necessarily … wonderful.

“There are pitfalls of having too much money, but you can find happiness despite it,” says Pauline Lord in a counterintuitive take on the subject. She will trace her path from du Pont heiress (“my mother would shudder at the word,” she laughed) to organic farmer in her talk, “From Silver Spoon to Garden Spade,” on Tuesday, March 3 at  2 p.m. in the Boca Grande Community Center auditorium. A reception will follow in the Woman’s Club Room, courtesy of the Boca Grande Historical Society.

The du Ponts have been coming to Boca Grande since the turn of the last century. The family fortune derives from one of America’s most powerful and enduring corporations, du Pont de Nemours, Inc. Their first abodes in Boca Grande were fishing shacks they moved to the beach and cobbled together, a great contrast to their mansions in Delaware’s Brandywine Valley. They entertained lavishly here, as they did in Delaware, spending hours deciding on the evening’s menu and which china (they had 20 sets!) and flowers would best complement the food.

Pauline’s grandfather Francis “Henry” du Pont founded Winterthur, the most notable museum collection of American furniture and decorative objects in the world. He was also a dedicated horticulturalist, conducting his experiments on his estate in Delaware. His passion for gardening was so strong that, instead of repairing the holes in the roof of his cottage in Boca Grande, he set out pails to catch the rainwater and diverted the cost of the roof repair to finance his garden projects in Delaware. Each Boca Grande dinner guest had a footman in attendance who would empty the pails when necessary in an eccentric approach to budgeting.

“Boca Grande over spring vacation was completely magical,” she recalled. “My brother and I (ages four and five) slept in tiny rooms at the back of the 211 Gilchrist house; my parents were in the front, and my mother’s governess, who was now my grandmother’s personal maid, had another tiny room. Far more than in New Haven, I was very independent and came and went as I pleased. In the mornings I fished in my great-aunt Louise’s boathouse and brought both fish and coconuts to Roy, my grandfather’s valet, who prepared them. I played as often as possible with my cousin, Ruth Harrison. Her mother, my Aunt PL (Pauline Louise), went fishing with us most afternoons on Roy’s boat in the bayou. We caught countless pin fish which we threw to the pelicans. Aunt PL took us to Lola Judkin’s house to watch her lure eagles to her lawn with fish. Lunch was usually at my grandparents’ house, with the first course inevitably Donax soup. It was like clam broth – disgusting to this five-year-old.”

When she was four her baby sister died, a tragedy that seems to have had a strong influence on her adult life.

After graduating from Concord Academy, she headed west to Stanford University. She subsequently earned her masters degree in family therapy.

“I worked as a grief therapist with dying and grieving clients, and later joined the counseling staff of Santa Clara University,” she said. “When my daughter Megan, now 33, was born, I retired from that job and became an environmental activist, eventually running a conservation organization called the Committee for Green Foothills.”

Although Pauline did not need to take a job, she said, “I realized early that meaningful work was important.”

As the du Pont family grew and its fortune was dispersed among more members, it made sense to think about undertaking entrepreneurial ventures to generate income, although everyone was doing well enough.  Pauline’s mother, Ruth du Pont Lord, owned White Gate Farm in New Lyme, Conn., where Pauline and her siblings began to grow organic produce to sell to the public. They also opened an inn on the property and host events there.

In addition to taking on three new business enterprises relating to the farm, Pauline and her husband, David Harlow, are raising a grandchild.

She will share the challenges of these new developments.

Over the last several decades, the du Pont corporation has been under fire for causing serious environmental damage. “Gerard Colby’s Du Pont: Behind the Nylon Curtain” (1974) is a well-regarded study and still relevant. “Dark Waters” (2019), a recent theatrical release, tells a familiar story of contamination and corruption.

Asked if her decision to become an organic farmer was motivated, at least in part, by du Pont’s history of environmental degradation, Pauline said no. She then hesitated and reconsidered, saying that perhaps it was. Even here in Boca Grande, where critters tend to co-opt the most determined efforts to raise healthy produce, Pauline produced a basketful of the most glorious lettuces imaginable, grown organically in a raised bed behind her cottage.

“You can certainly say that, like my grandfather, I have a passion for flowers and agriculture,” she admitted.  Perhaps she is a new shoot off an old branch … one that her grandfather would be proud of.

Pauline will have a surprise for everyone attending her talk. Join her for a stimulating and revealing story of one woman’s journey from riches to rutabagas.

This program will be free of charge (donations are welcome) and is sponsored by Hazeltine Nurseries. Everyone is welcome.

Go to bocagrandehistorialsociety.com for more information, or call 964-1600.

Newer PostLiterature Forum to discuss ‘The End of the Affair’ in March
Older PostTIS chowder, free concert this Saturday