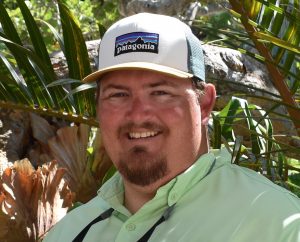 Persistent and adventurous is a perfect description for Capt. Parker O’Bannon. He is a sixth-generation Floridian born in Fort Myers and raised in Boca Grande. He is an only child, and he follows in the footsteps of 100 years of notable O’Bannon guides spanning four generations, who have hunted and fished all over the world. His passion for the fish and game he pursues and the environments in which they live clearly resonates through his work as an outdoor guide.

Parker attended The Island School, L.A. Ainger Middle School and Lemon Bay High School. He said that growing up on the island, he had a very close group of friends who would spend time together every day after school.

“It was very different than it is now. We probably got away with some things that would have got us in some trouble today,” he said with a laugh. “It was a very cool place to grow up, especially if you like to fish.”

He’s loved the water since as long as he can remember, and has photos of himself with a fishing pole in his hand when he was still wearing diapers.

Parker said that growing up and watching his dad guide and hunt inspired him at a very young age to pursue a career as a guide.

He’s been fishing for tarpon in Boca Grande since his early childhood, catching his first on fly at the age of 12. He started working for Capt. Tater Spinks at the age of 14 and continued until he was almost 21.

“We had so much fun,” Parker said. “I learned so much from him.”

As a graduate of the University of Florida, he has an unielding respect for the outdoors. He chose to study agriculture as his major concentration and earned a bachelor’s degree at 22. After graduation from college, he worked in the corporate world for about a year, but he quickly realized that wasn’t what he was passionate about.

“I worked for a chemical company for about nine months, and I just didn’t like the lifestyle,” he said. “You can make all the money you want, but what’s the point if you’re not happy?”

So at 23, he quit the job and started his guiding business. While he was still in college, he worked for Florida Outdoor Experience and did turkey hunting and fishing guiding.

“That’s when I really starting learning a lot about the industry,” he said. “I got to meet people who traveled all around the world. That’s when I realized I didn’t want to stay in one place all the time. It can get very monotonous. I like the feeling of running my own business.”

He’s spent the last couple of years building his clientele and has been booked pretty solid this past year.

Whether in the woods, along the Gulf Coast, Lake Okeechobee or the mountains and rivers of Montana and Alaska,  Parker relishes the challenges and rewards of guiding clients on their trip of a lifetime. He books clients on duck- hunting excursions in January, turkey-hunting trips in April and, of course, tarpon fishing in May and June. From July first through the end of September he will be out in Montana leading trout-fishing trips.

“I have guided in Alaska, but I think I will be heading to Montana from here on out – it’s just so beautiful out there in the summertime.”

Here in Boca Grande, his specialty is fly fishing. He uses fly ties that basically mirror what a tarpon would eat, like bait fish, crabs or shrimp. The ties are all made of natural materials like chicken feathers and buck tail.

“When you tie one on and get a bite with one you’ve never used before, it kind of becomes a work of art that you made,” Parker said. “I would describe fly fishing as more of an intimate experience, because it’s sight fishing. We  are not just dropping a bait and waiting. We are hunting for them.”

Parker’s dad, Capt. Phil O’Bannon, has been a well-respected captain on the island for decades. He also offers guided quail- and turkey-hunting excursions at Lykes Brothers, Inc. Ranch in Okeechobee, Fla.

“I have gone out there on many occasions and helped him out when there were big groups booked,” Parker said. “We get along very good, and we have fun.”His mother, Mary, is very active in getting social and political issues resolved on the island.

“They’re great parents. I truly appreciate all they have done for me over the years,” Parker said. “It’s good to be able to come home and do what I love to do.”

Parker said one negative aspect of running a business is the loss of clients due to tropical storms or red tide. He left the island early last year because of the long battle with red tide and went to work in Alaska.

When he is not working, he enjoys photography and nature in all forms.

Parker’s girlfriend, Taylor, lives in Gainesville. They have been seeing each other for about six years. Parker also has a chocolate Labrador retriever named Jenny.

Known for his charismatic sense of humor, patience and tenacious commitment to his customers, Parker makes excursions an unforgettable experience. And he said he always looks forward to coming back to his hometown every spring.

“I love this island – it’s a very special, beautiful place.”