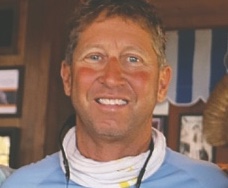 Ozzie Lessinger learned to fish before he could walk. His father, an avid fisherman, put 6-month-old Ozzie in a backpack carrier and placed a fishing pole in his hand and taught him to fish. Ozzie was hooked, so to speak.

Originally from Tuxedo, New York, Ozzie moved to Tallahassee with his family when he was 4. They later moved to Colorado when he was 12, and he stayed in that area through college.

After graduating from Colorado State University with a degree in marketing and trying his hand in the corporate world, Ozzie traded his suit and tie for a fishing pole and some flip-flops.

“My corporate career didn’t last long,” he said. “That wasn’t how I wanted to spend my days. I knew I wanted to make a living as a charter captain.”

And almost 30 years later, that’s exactly what he is doing. Ozzie owns and operates Sanibel Fishing Charters, offering full and half-day fishing charters out of McCarthy’s Marina on Captiva Island. Captain Ozzie is a full-time professional fishing guide and tournament fisherman who for the past 26 years has been operating in the waters surrounding Sanibel and Captiva Island.

“I have fished my whole life,” he said. “When I was 12 years old I went out on a flats boat with my family down in the Keys, and that’s when I knew I wanted to work and make a living on the southwest coast of Florida.”

Ozzie ﬁshes out of a 17-foot Action Craft flats boat that can accommodate up to three anglers.

“My boat was specifically designed to safely traverse and fish the shallow waters of our area, offering my clients the ultimate fishing experience.”

Capt. Ozzie Lessinger and anglers Jason Duke and Ben Levene took first place this year at the Izaak Walton Tarpon Tournament. While the World’s Richest Tarpon Tournament and the Gasparilla Island Kids
Classic are the bigger tournaments on the island, this is a smaller but very prestigious tournament held annually in local waters. It is the oldest tarpon tournament in the country. Hosted by the Useppa Island Club, the two-day event was held on Friday, May 31 and Saturday, June 1. There were 15 boats in the competition, with a captain and two anglers on each boat.

Capt. Ozzie and his team had six releases, and they’ll be immortalized on the Izaak Walton Tarpon Tournament perpetual trophy, along with other names that date back more than 100 years. Because they took first place, the captain and his team are invited back next year to defend their title.

“I also won this tournament in 2017 and took second place last year,” Ozzie said. “And because we won this year, we will automatically qualify to fish next year. There is a ton of heritage and history with this tournament, and it’s come and gone over the years. I have had some really good luck these past few years in this tournament.”

In 1990 Ozzie moved to Sanibel Island, where he fulfilled a life-long dream and established himself as a full-time fishing guide in 1994. He lives in Fort Myers with his wife, Jennifer, sons Sam and Gus and daughter Sadie.

Ozzie began fishing tournaments in 1994. He won the first tournament he ever competed in and has been a consistent top-five finisher ever since. He’s competed in more than 100 tournaments with over 20 first-place finishes. Besides the annual Izaak Walton Tarpon Tournament, his tournament history includes local events such as the Caloosa Catch-and-Release series, the Flatsmasters series and the Professional Tarpon Tournament series. On a national level, Ozzie has fished in the FLW Redfish Tour, the Southern King Fish Association tour and the ESPN Redfish Cup, in which he and his partner had three top-ten finishes in 2008. He used to fish in the Professional Tarpon Tournament series years ago in Boca Grande, and also at the annual Miller’s Marina tournaments in the 1990s. He also worked as a first mate in several of the World’s Richest Tarpon Tournament events during the 1990s.

At the recent Izaak Walton tournament there were 24 tarpon released on May 31 and six on June 1, for a total of 30 releases.

The Izaak Walton Club, named for the 17th-century author of “The Compleat Angler,” was founded on Useppa around 1908. It was one of the most prestigious fishing clubs in America and one of the first conservation groups in the United States. Long ago the Club initiated the practice of releasing all tarpon except those to be weighed in for the award of the highly coveted button. A silver button was given for the first tarpon caught, a gold button for a 100-pound tarpon and a gold-and-diamond button for a 150-pound tarpon. Now, of course, virtually all tarpon are required to be released statewide unless in pursuit of an international game fish record.

He recalls winning the first tournament he ever fished in, which set his passion to pursue a career as a fishing charter captain.|

“I started fishing professionally pretty early,” he said. “Now for the most part, almost all of the tournaments I fish, I also guide in.”

His said what he likes best about being a fishing guide is being able to see people experience what he loves doing so much.

“It’s still a job for me, but I really enjoy it. I love sight fishing and fly fishing the most. You don’t catch as many fish, but the reward is greater. You have to earn it.”

The captain fishes year-round for snook, trout and redfish, mostly in the flats and the back bay. He also fishes from the beaches of Cayo Costa from time to time.

When he is not working, Ozzie enjoys spending time with his family, and he also plays cards with friends when he has some extra time.

He usually recommends that people take a lesson at a local bait shop or watch some videos on fly fishing before coming out on the boat, so that they don’t have to learn on board and will have more time to catch some fish.

He’s booked pretty solid over the next three weeks for tarpon fishing and is looking forward to doing some snook and redfish early morning charters in July.

“I do a lot more half-day trips and early mornings in the summer months because it gets so hot.”

To book a charter with Capt. Ozzie or if you are interested in tournament fishing, call (239) 910-7764 or visit fishsanibelcaptiva.com.