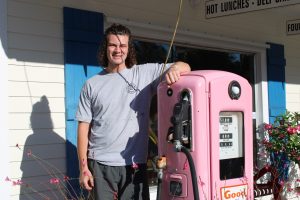 BY OLIVIA CAMERON- Some people come to Gasparilla Island for its renowned beaches, to reminisce on the Olde Florida feel or to sip on cocktails inspired by ocean puns. No matter where people are visiting the island from, we all frequent the same store in the heart of this small town. Nick Gassman works at Hudson’s Grocery because he enjoys the simplicity of it all.

Since February, Nick has spent the unexpected year working at Hudson’s, where his personality appeals to the community. The right amount of gusto is all it takes for him to start his day at the store, as he lets love of the seaside town do the rest. The store sits a few streets away from the ocean, making it a small and convenient shop for those of us who are beach bums at heart.

As a Florida native, Nick is familiar with the coastline. His childhood in Englewood was intertwined with a passion to play soccer, which he would continue through his attendance at Lemon Bay High School. Once he graduated, he set out to work on the island, where he’d envisioned his career path would take him.

“I began working with a carpentry company that used to exist out here,” said Nick. Shortly after, he would spend the following two years operating a forklift to raise boats at The Inn’s marina. “I had no prior experience, but no one was perfect at operating that machine.”

Nick’s mother enjoyed working with the Hudson’s owners, the Wises, for more than 10 years, and she recommended that he give the store a shot. Months later, Nick has a newfound appreciation for the tightly knit business and family feel. He works at the grocery store alongside his sister, Alex, who also played soccer through high school. The siblings spend their days getting to know the regulars.

“I enjoy how laid back it is here,” said Nick. “I also get to eat some of the food the crew prepares.” Nick shifted from his position in the meat department to stocking the shelves. “Lately, it’s slowed down and we’ve been able to keep up with the islanders.”

Back in March, Hudson’s experienced complications when the COVID-19 outbreak shut down local businesses. The store’s shelves quickly fell empty along with other local grocers. Nick recalled being new to the staff when things started to fall through.

“We had trouble with the truck supply, but our team got used to shopping for the customers when we couldn’t have crowds coming into the store anymore,” said Nick. He remembered how uncertain the demand became and saw local residents stocking up in a panic. “For the most part, things are back to normal, although we still all wear our masks.”

With a glimmer of hope that the island will return to business as usual, Nick will continue to work at the only grocery store within an extensive radius. In fact, Nick hardly sees himself working anywhere other than in paradise.

“Way back in the 70s, my great grandparents and my great uncle all lived in Boca Grande. I’ve been visiting the island for a very long time. So long, in fact, that I hardly remember the first time I came here,” said Nick. “My parents would even take me to work with them instead of having a babysitter watch me. It’s hard to envision spending my time elsewhere.”

The distance between Nick and his girlfriend of one year has not stifled their young love. The two met in sixth grade just before she moved to New Hampshire with her family. Last October, Nick drove for 23 hours straight to surprise her up North. Once Hudson’s temporarily closes for maintenance during the barren middle of September, Nick plans to visit her again.

When Nick is at home, he’s most likely giving his attention to his two pugs, Snickers and Scruffles.

“They’re brothers who are now about 87 years old in dog years,” he said. “One is blind and the other is deaf. They try to bring their senses together and help each other out with the senses they have left.” 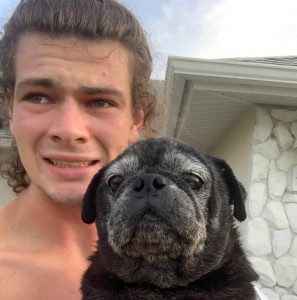 Nick isn’t fazed by their sensory decline. He grins instead, knowing they are unique pups.

“They were not born this way. It’s common as pugs get old for them to develop health complications, like dry eye.”

Beauty is in the eye, or the ear, of the beholder.

As Nick continues to provide customer service to the community, he is reminded of his childhood trips to the quiet island. The 22-year-old has found he is just old enough to remember how quiet Boca Grande used to be.

“I remember when there was a lot less development on this island. I feel like the visitation is much higher, which isn’t a bad thing, but the island used to be more secluded rather than a tourist destination,” he said. Of course, he understands why this town draws the crowd, and it’s for the same reason: that feeling of a secret paradise.

Because of its wild popularity, Gasparilla Island is Nick’s year-long heaven. Our seasons are chock full of people avoiding inches of snow, but he considers himself lucky to live in the tropics full time.

“Growing up in Southwest Florida, I have actually enjoyed that it does not snow. I like having 365 days of tropical climate, where the only thing you need to own is a pair of flip-flops.” In his eyes, hurricane season does not compare to icy windshields and slushy streets. No snow boots for this guy.

As the days go on, Nick grows tired of a year without island activities. However, he wouldn’t want to be anywhere but on the coast.

Living just off the island gives Nick the advantage of lying beachside at his favorite shoreline.

“In my free time, if I plan to head to the beach, I always come back to Boca Grande.”

Next time you hop on the golf cart and head to the store, give Nick a wave. He’ll be happy to see a familiar face.