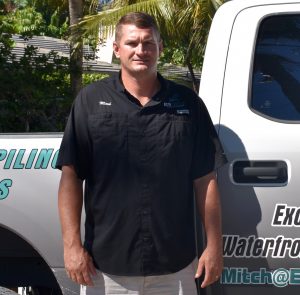 Mitch Smith recalls spending the summer months of his youth at day camp at the Boca Grande Community Center.

His father, Myron, worked for a cleaning business on the island for many years. His mother, Janice, worked as a teacher in Charlotte County for many years and now works for the Department of Defense. She’s currently stationed in North Carolina.

Mitch was born in Georgia, but his parents moved to Rotonda when he was just three months-old.

“They had friends who lived in Englewood, and I think after they came to visit and saw how nice it was, they decided to move,” Mitch said.

After graduating from high school, Mitch attended Florida Technical College in Orlando. He studied computer electronics but never actually worked in that field.

“I graduated from college in 2007, and there weren’t many jobs available because the economy was so bad,” he said. He returned to Englewood and found a job in the marine construction industry.

A neighbor in Rotonda mentioned that he had a family member who was looking to hire someone, so that’s how Mitch got started in the field.

Mitch also holds a fishing captain’s license and is a member of the Boca Grande Fishing Guide’s Association, Inc. He owned Free Line Charters and was a fishing guide on the island and around the area for years.

He also worked as a commercial fishing captain for Viking Fishing Fleet, located in Tarpon Springs.

He commuted to Tampa and would charter a boat 185 miles out, four days at a time. He ran a 65’ custom head boat all throughout the Gulf coast and down to the Florida Keys.

He also fished in a lot of inactive natural Florida springs and caught mangrove snapper and grouper.

But after meeting his wife and starting a family, something had to change.

“It was a blast, but after a year I wanted to spend more time with my wife Kelly, who was pregnant with my daughter Ava,” he said.

Kelly is a banker and works for BB&T Bank, and Ava is four and is in pre-kindergarten right now.

Seeking more time at home, Mitch took a job working as a sea tow captain in Port Charlotte for a few years.

He said the hardest part about that job was that he was always on call and could expect to be called out for a rescue or salvage three or four nights every week, after working a regular eight-hour day patrolling Charlotte Harbor.

“It was a great place to work and a very exciting job, but in my mind I always knew I wanted to own a business,” he said. “I worked 9 a.m. to 5 p.m. and then I was on call for the night so it was really a 24-hour shift. The hours were crazy.”

As fate would have it, one day he was towing in a customer who was entertaining friends from up north on a fishing trip. Their boat had broken down, and Mitch came to the rescue.

“They were really disappointed because they were looking forward to catching some fish,” Mitch said. “But then I told them I was a guide, and they ended up hiring me the next day and caught a ton of fish in Bull Bay and Devil Fish Key. We probably caught eight or nine different species that day.”

On that fishing trip Mitch met Chris Larson, who would prove to be a very important business connection in the future.

The two became good friends, and every time Chris would come down to Florida he would hire Mitch for fishing trips.

Chris owned a chain of businesses up north and had years of entrepreneurial experience, along with more than a decade of experience in the marine contracting field. The two started Eco Marine Solutions in Englewood in October of 2015. Mitch is the CEO.

The company specializes in marine structure and construction projects.

“We explored a lot of options like offering eco-cruises or private charter rentals, but Eco Marine Solutions was the perfect fit for both of us,” Mitch said. “The economy was getting stronger, and the construction industry was booming.”

So Mitch went to get his contractor’s license and became a State-certified marine specialty contractor.

Docks, seawalls, boatlifts and shoreline stabilization are the major projects that have been keeping him busy lately.

He’s done several jobs in Boca Grande and said lately he’s been getting many more inquiries about upcoming projects.

“We have been growing uncontrollably – we are so busy right now, and I am so thankful for that,” Mitch said.

Eco Marine Solutions currently has seven employees and will most likely have more in the future.

“Chris does all of our marketing and advertising, and with all his years of experience, it’s just invaluable what he brings to the table,” he said.

The business serves Charlotte, Lee and Sarasota counties, and Mitch currently has jobs lined up through November.

Growing up in Englewood and fishing since he was a boy, it’s no surprise that his favorite hobby is fishing.

“I live for tarpon fishing,” he said. “I love everything about the water – my wife and I are both water people.”

Mitch recalls that when he was young he participated in the Gasparilla Island Kid’s Classic Tarpon Tournament, several inshore redfish tournaments and a few other local ones.

He doesn’t have time to work as a guide these days, but he enjoys going out on the boat with his family whenever he has some spare time.

“I fish every chance I get,” he said. “Living right here in South Gulf Cove, it only takes a few minutes to get to the boat ramp, so I am out there at least a couple of nights a week.”

The business owner belongs to the Englewood Chamber of Commerce and the Charlotte/DeSoto Builder’s Association.

Mitch has four older siblings: Melissa, Michelle, Milton and Melody, all of whom live in Florida.

“We’re a very close family,” Mitch said. “It’s a big priority to spend as much time together as we can.”

Milton helps Mitch out and works as a foreman at Eco Marine Solutions.

“My family is very active and we spend a lot of time snorkeling at the sandbars here and down in Key Largo,” he said. “We also enjoy going to the local art festivals and seafood festivals in the area.”

Look for Mitch around town, building state-of-the-art marine structures as his company continues to grow.

Newer PostChase Taylor doing well after foul ball accident, meets Tebow
Older PostNever forget that Texas could have been us