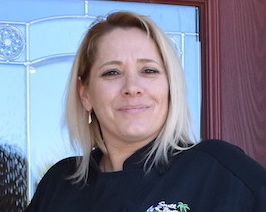 South Beach Bar and Grille Executive Chef Mimi Carvalho caught and released her first tarpon at the 2019 Ladies Day Tarpon Tournament, and she said the experience was absolutely exhilarating.

“I was so excited, it was so thrilling,” she said. “Tarpon are such beautiful, strong fish. I have so much more respect now for the organizations that work to protect them. And the captain was so gentle when he released the fish.”

Mimi’s been coming to this island for 20 years, and this was her first time competing in a Ladies Day tournament. Being a chef, she said it’s difficult to get a Saturday evening off from work, and this was the first time the opportunity presented itself.

“I didn’t know what to expect, the fish fought so hard,” she said. “Just when it was close to the boat, it took the line out again. It was a real battle. It was so exciting, I couldn’t shut up about it for a week.”

She said it was a very thrilling day because she was able to see many of her friends fishing on the other boats, and everyone seemed to be have a good time.

“And the water and sunset were so beautiful.”

Mimi’s invigorating personality is appreciated by her regular customers who dine at South Beach.

She can’t make her way from the kitchen through the dining area without being stopped for a quick hello and hug from patrons dining in the establishment.

Mimi was born and raised in France and moved to the United States when she was 25.

Many know her from the 10-plus years she worked as executive chef at the Coral Creek Club, just off island in Placida. She worked there from 2007 to 2017.

After having a baby girl, Miah, three years ago, Mimi realized she needed to cut back her hours.

She was averaging six days at the Coral Creek Club. Mimi also has a 4-year-old at home, Marcos, and a 17-year-old, Eva, who is graduating from Lemon Bay High School this year.

She’s been at South Beach for almost three years now.

“Bart and Marco (owners of South Beach) were thoughtful enough to offer me a position where I could work five days a week, so this is a very good match,” she said. “And there is another chef, Osmar, who helps me in the kitchen, so it’s good to be able to change our schedules and help each other out. One of us is always at the restaurant.”

Mimi is currently in the process of switching out the season and summer menus at the restaurant. She’s recently added a traditional French dish, Pot-au-feu, which is the most celebrated dish in France, to the menu at South Beach. Traditionally it is a French beef stew, but Mimi has incorporated different variations of it, like converting it into a seafood stew with vegetables. She said the new popular dinner menu option is a traditional French seafood stew. It is actually her grandmother’s recipe. The dish has a seafood base, with oranges and saffron.

“It’s like a bouillabaisse with potatoes, carrots, celery, but no tomatoes.”

Gumbalaya – a cross between gumbo and jambalaya – is another new dish offered at the restaurant.

“I try to offer people a variety of options,” the chef said.

During season, she oversees a staff of about 20 employees in the kitchen.

Mimi has been a chef for many years. She worked at restaurants in Georgia and Sarasota before coming to this area.

Part of her job is ordering the products for the kitchen, and she chooses to use local vendors whenever possible. She orders fresh fish the night before and spends the morning cutting and prepping it.

“I love food – I love creating, and I was always obsessed with mixing different things together to invent new tastes,” she said. “And I love making something people don’t see every day.”

She said her biggest compliment is to see the surprised smiles on the customer’s faces when they try one of her original items.

“My goal is to offer high-quality food on a consistent basis, and to offer a variety of choices for the customer.”

Mimi and her husband, Marcos,

currently live in Rotonda. They have been together for seven years and married for two. Marcos owns a tile and flooring business and serves many customers in Boca Grande.

Her parents live in Vandeuil, France. They came to visit last Christmas.

“They are in their 80s and it’s a long way to travel,” Mimi said, “so we are happy whenever they can visit.”

She tries to visit her family in France every summer, but with two young children, that hasn’t been possible.

Mimi went to college to study marketing and management and earned a master’s degree.

For her thesis, she concentrated on the food industry.

“I had to do a lot of research for my thesis, and since I was always around food, I figured I should choose that as my topic,” she said.

Throughout most of her life, she worked for supermarkets and restaurants and used that experience for the research project.

“I had some very interesting jobs during my years is school,” she said.

“I did some research in marketing to promote a new bottle of champagne – it was very interesting.”

She said that when she was growing up, in a French family everyone cooked.

“My grandmother cooked, my mom, my sister and I – we all cooked,” she said. “When there are French women in the house, they’re usually always cooking together.”

From a young age, she recalls going to her grandmother’s house and always being asked to “close her eyes and taste.”

“From early on I had a good education on what to eat and what to drink.”

Her family owns and runs a winery in France.

Mimi met her first husband in France, and they moved to Jekyll Island, Georgia where she worked as a chef.

From there she moved to Sarasota and worked for The Colony at Long Boat Key Club.

After some time there, she went on to work for Lemon Bay Golf Club and finally Coral Creek.

Stop by and say hello to Chef Mimi the next time you’re enjoying a meal at South Beach. A variety of lunch and dinner specials are offered daily.