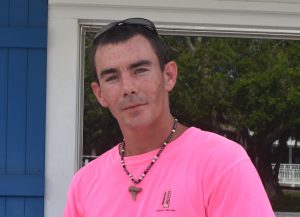 If you’ve visited Hudson’s Grocery recently, you might have noticed a new face helping to run the store. Sporting a bright pink T-shirt, Mike Bower has been working hard at the store, learning how to run the business for the past several weeks.

Working alongside his grandfather, John White, a long-time employee of Hudson’s, Mike will be following in John’s footsteps, eventually taking over as ordering manager when John decides to retire.

“It’s kind of funny, because I’m following his same path,” Mike said. “It’s nice being able to work together, and I think he wants to slow down a little bit and maybe travel a bit more,” Mike said.

Mike has helped out at the store before. He visits his grandfather every year for a week or two, and last year he even spent some time working at the store.

“Each time I came down I fell more in love with the island,” he said. “I love the people and the weather here – it doesn’t get much better than this.”

When Mike expressed some interest in moving to Florida and working here full-time, Emily (Hudson’s store owner) asked him to fill out an application, and she kept it on file.

An opportunity opened up in June, and she offered Mike a job, which he happily accepted.

Originally from East Hampton, Connecticut, Mike started out in the grocery store business while he was still in high school. After graduating, he decided to stick with the retail food business because he enjoyed it. He started out in the dairy area and then progressed to produce and eventually managed the product ordering for a store.

Mike’s first job was at the same shop his grandfather worked at in Connecticut – Tri Town Foods Grocery. The store was about the size of an average Winn Dixie, for the sake of comparison.

Mike has several years of experience in the grocery store industry. He managed a Stop N Shop supermarket for several years back in his hometown.

“I am already familiar with ordering products. I just had to learn how they do it here and on a smaller scale.”

Some of his duties at Hudson’s include ordering dairy, groceries and beverages, and cleaning up the store at the end of the day. He also helps with unloading the distribution trucks daily. Mike helped stain the wood produce shelves recently, and he’ll be a part of other summer projects over the next month. He is happy that he was able to start working here during this time of year, so he can be prepared to help out in other areas at the store before season begins.

“I’ve been on the island in the winter, but I wasn’t working here at the time, so I don’t know how busy it actually gets,” he said. “My grandfather told me I’ll be working very hard though.”

He said the hardest part about the grocery business is keeping up with the produce.

“Certain fruits and vegetables ripen quickly, so you always have to keep an eye on what is on the shelves.”

His plan was to move to Florida in September, but the need for help happened sooner, which will give Mike plenty of time to learn the ropes during the slow summer months.

John took a flight to Connecticut in July and drove down with Mike when he moved.

“It was a pretty long drive – 1,600 miles – so it was nice being able to take turns driving,” Mike said. “And the scenery was beautiful.”

Since moving here, Mike has been busy exploring the island. He visited several popular places around town and plans to explore it even more.

Every day after he finishes work, Mike goes swimming in the Gulf of Mexico. He packs his mask and snorkel in the car and heads over to the beach around 5 p.m.

“It’s only one block away, so I spend about 30 minutes in the water while everyone else is heading home,” he said. “And there’s nobody on the road by the time I leave.”

Mike currently lives in Englewood. He has four cats up north that are being taken care of by his mother right now, until he gets situated down here. He thought he was rescuing one cat, but she ended up being pregnant, and he ended up with four. Elizabeth is the mom, and Patches, Emma and Buster are the kitties.

“They’re all really adorable,” he said. “They’re very cute cats, I just couldn’t get rid of them. I’m a sucker when it comes to animals.”

Buster is a polydactyl cat: a double-pawed cat with two thumbs.

“They’re pretty rare,” Mike said. “The dad must have had the gene in his family.”

Mike’s mom and dad, Lisa and Jack Burchard, currently live in Connecticut, but they may eventually move to this area when they get closer to retiring. His dad works in the construction business, and his mom is in the cleaning business. He has a younger sister, Jacqueline, and an older brother, Todd, who also live in Connecticut.

“I’m sure they’ll all be visiting this winter,” he said.

Mike said he is happy to be done shoveling the snow and driving on icy roads.

“I love living here – I love the heat,” Mike said. “I’ll take it over ice and snow any day. It was too stressful.”

He has enjoyed meeting the locals in Boca Grande, and he’s looking forward to meeting the seasonal people when they return to the island.

“The people here are amazing,” he said. “I feel like I am at home. I’m very lucky to be here and happy to have this opportunity. Everyone who works at the store is so nice, and the customers are polite. It really is my dream job. It’s just a beautiful atmosphere.”

When he is not working, Mike enjoys swimming and just about anything outdoors.

A self-proclaimed “water rat,” Mike said he could spend time in the ocean every day, whether it is kayaking, snorkeling, swimming or just floating.

Although he is familiar with fresh- water fishing, he has not done much fishing in the Gulf of Mexico. He is looking forward to possibly going tarpon fishing next year. He also enjoys hiking and bicycling, which he is excited to be able to do all year round.

“I heard that Emily books a fishing trip for the staff every summer, so hopefully I can be a part of that next year.”

Mike is very appreciative of the owners at Hudson’s.

“They really care a lot about their employees and the community,” he said. “It’s good to be respected by your bosses; it’s a nice feeling. Being in the corporate world, I never really had that experience before. It makes me even more excited to come to work every day.”

Mike’s goal is to eventually save enough money to purchase a home in the area. He has no plans or any desire to move back up north. He’s been enjoying spending more time with his grandfather and helping take care of his grandpa’s dogs.

Be sure to look for Mike the next time you stop into Hudson’s – and welcome him to the island.