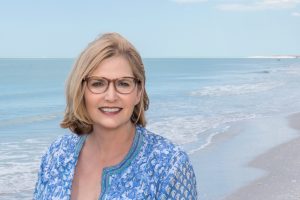 BY OLIVIA CAMERON- Local realtor Melissa Csank has found the perfect blend between homes and history while listing local houses and serving on the board of the Boca Grande Historical Society. However, Melissa was not always a real estate agent with an interest in historic homes.

Melissa grew up surrounded by the rolling “Sound of Music” hills of Gate Mills, Ohio, a small, historic village near Cleveland with a population of approximately 2,500 people. Bounded by the Chagrin River, the town was a place where Melissa would ride her horse, Zanzibar, and spend warm summers at Girl Scout camp.

“My college friends and I made a pact to move to New York City after graduation,” said Melissa. “I lived the farthest away from the city but was the first to get a job and move there.”

Her call to adventure came with a bit of an adjustment to city life, but she loved the magic of Manhattan.

By 1990 she landed her first job at a literary agency, but she was looking for a more engaging opportunity.

“My best friend at the time was in the advertising industry, and that looked so much more glamorous and exciting to me,” said Melissa.

With the enticing advertising business dangling in front of her, she decided to take an entry-level account management position at Young & Rubicam, where she spent 10 years working her way up the advertising ladder.

Melissa then transferred to the marketing department of a Los Angeles pharmaceutical company. Her challenging work brought on the occasion to collaborate with inspiring coworkers. In 2011, though, she decided she was burned out and ready for a change.

Eschewing Corporate America, Melissa felt there was more of the world to be seen. A few flights and complimentary peanuts later, Melissa found herself exploring Central and South America.

“Travel is one of my very favorite things to do, so it was an amazing and special time. But full-time travel gets exhausting, and I was ready to put down some roots,” said Melissa.

Years after embarking on her travels, she planted her roots in the soil of a Csank tradition.

“My dad discovered Boca Grande, and my parents purchased a condo at the Boca Grande Club in 1982, so I’ve been coming to Boca Grande most of my life,” she said.

In 2013, Melissa became re-acquainted with the island. Her newfound residence led her to a party held by the island’s turtle patrol trailblazer.

“I got invited to a party at Grace Harvey’s house, where I met the amazing, late Nancy Lingeman, who was the unofficial naturalist of the Island,” Melissa said. “The next thing I knew, I was on turtle patrol and helping to build their website.” 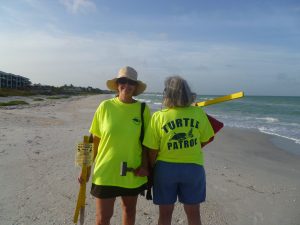 That same year, the Boca Grande Sea Turtle Association’s turtle patrol nonprofit was organized,and Melissa joined their efforts. As a board member, she handles the administrative and communication aspects of the patrol. The BGSTA has honored its co-founder, Nancy, with a bench at the Community Center to memorialize her contribution to Boca Grande.

Melissa put her historical strength to the test and signed up to volunteer with the Boca Grande Historical Society.

“I saw a flyer in town about the need for volunteers at the Historical Society,” she said. “I put in a call and got an interview with Jim and Rose Marie Blaha, who put me to work right away.”

As a grant writer and volunteer coordinator for the Boca Grande History Center, Melissa enjoyed working on behalf of historical preservation. In 2018, she was asked to join the BGHS board.

“They recently nominated and elected me to serve on the executive committee, which I was honored to accept,” said Melissa.

She also chairs the membership committee.

“It’s rewarding to see how supportive the community is, and how much they value the programs and events.”

A year later, her advertising and marketing skill set came into play when she managed the rebranding of the website, communications and messaging for BGHS and the History Center. Due to the recent pandemic, the history buffs are working on getting the program back on its feet.

“Boca Grande has such a fascinating history, and we really try to keep the stories alive for the next generation, and archiving has become a big part of what we do,” said Melissa.

Jim and Rose Marie have been working to expand the archival offerings on the website to include previous lectures and interviews given over the past 25 years of island history.

“Our lecture series and History Bytes generated record attendance and acclaim this past season, and we also work with The Island School to weave the island history into their education,” she said. “Our current History Center interactive exhibit is “Boca Grande, Once a Railroad and Industrial Town.”

Yet, her favorite event is the BGHS Home Tour. Melissa is glad to be a part of a consistent event that brings her favorite topics together. From engaging in real estate among the community to indulging in a bit of history, the Home Tour is something she looks forward to every other year.

“I also love when Carl Abbot, the Sarasota architect, comes to speak as part of our lecture series,” she said.

BGHS has collaborated with Boca Grande TV to highlight the impact of COVID on the lifestyles of local residents. The interview footage is accessible to anyone just by visiting the BGHS and Boca Grande TV websites.

“The challenge for us now is to figure out how to safely deliver the programs that our community wants and loves amid the pandemic,” said Melissa. “BGHS Executive Director Kim Kyle is working closely with Lee County, monitoring our ability to safely reopen the History Center with strict adherence to guidelines.”

The organization will continue to monitor the situation and provide alternate plans for upcoming events.

Her packed schedule is just a prerequisite of being an islander. Melissa lists homes on behalf of Gulf-to-Bay Sotheby’s International Realty as a full-time real estate agent.

“Real estate is a great fit for me, as it brings something new and exciting every day. I thrive in dynamic environments, and real estate in Boca Grande more than qualifies. I’ve found such a joy helping people realize their dream of owning property in Boca Grande and introducing them to this special community,” said Melissa.

She is intrigued by the history behind island residences and enjoys listing houses with a story behind them. Her brokerage is a great supporter of both BGHS and BGSTA, as well as the entirety of the community.

Melissa also helps organize the book sale at the Johann Fust Library Foundation twice a year. She enjoys taking the time to catch up with locals.

“It really showcases what a fantastic and special community we have,” said Melissa.“The library has a special place in my heart. My father is a former board member and, as a rare book expert, still advises the library, so the book sale is something we do together.”

When she’s not giving back to the community, Melissa squeezes in a few tennis matches and brisk walks on the beach.

“I travel as much as I can, too,” she said, noting her travels to 55 different countries. Yet in her eyes, Boca Grande is unique. “The mix of culture, community, unique history and the abundant wildlife here make me so happy to call this my home.”

In 1995, her father Paul, a retired attorney, was featured in the Boca Beacon alongside his collection of rare books. He and his wife, Carole, continue to run their antiquarian bookstore in Cleveland as Melissa takes his place in the newspaper.