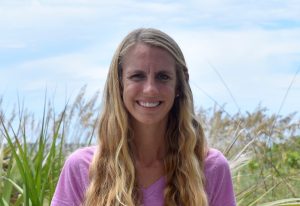 Mary Mazyck spent almost four years in Ecuador serving with the Peace Corps before returning to her hometown of Tallahassee, where she spent a year riding horses for a living.

“I wanted to experience a new adventure while doing something good in the world,” Mary said.

While in Ecuador, she mostly taught environmental education in schools. She also worked with groups of women, teaching them how to improve their gardening skils so they could benefit more from the various kinds of vegetables they grew and sold.

She lived with a couple of different families in the country; both were in agricultural areas where the people produced their own food.

“It was the easiest place to grow just about anything,” Mary said. “The quality of soil is amazing there – it was like paradise. It’s such a beautiful country. Ecuador is about the size of the state of Colorado, but it has the Pacific Ocean, the Andes Mountains and the Amazon Forest – so it’s extremely diverse.”

Originally from Tallahassee, Mary grew up with three brothers, and they all still live in Florida. After graduating from high school, she attended Sewanee: The University of the South, a private Episcopal liberal arts college in Sewanee, Tennessee. The school is owned by 28 Southern dioceses of the Episcopal Church, and its School of Theology is an official seminary.

She chose a double major with concentrations in environmental studies and psychology.

“It’s a smaller school, which is what I was looking for, and it has a beautiful campus,” she said. “My uncle attended the school, so I was already familiar with it.”

She decided to join the Peace Corps after earning her bachelor’s degree.

“Nobody spoke English where I was stationed,” she said. “I knew a bit of Spanish from taking classes in high school, but I had to become fluent in the language very quickly.”

The family that hosted her in Ecuador owned a dog that had a litter of puppies while she was staying with them, and Mary had a strong connection with the runt of the litter. She actually brought the dog back to Florida with her when she returned to the United States two years later.

The dog is now seven years old, and has adjusted well to  Florida.

“She’s a pretty easygoing dog, considering I have moved two times since she was a puppy,” Mary said.

Although she’s never visited this part of the state before, she and her dog, Osa, have enjoyed living in Englewood for the past year. Osa is seven-year-old miniature German shepherd.

“Osa is the Spanish word for bear, and the kids at the school where I taught named her,” Mary said. “I thought it was a good name, because she does look like a little bear.”

She was surprised that it was fairly easy to bring the dog into the United States from Ecuador, and relieved as well, because it would not have had a very good quality of life

living outdoors there. As long as the dog has all of the required current vaccinations, no quarantine is necessary.

After she returned from Ecuador she moved back to Tallahassee, where she helped train and exercise horses for a living. She grew up riding horses and has been around them throughout her life. She still rides locally with friends in Sarasota.

Mary decided to continue her education a year later and attended the University of Florida in Gainesville. She graduated with a master’s degree in forest resources and conservation.

She found the park services specialist position online in January and decided to apply.

“I was looking for positions that had an emphasis on education, so that’s what drew me to this job.”

Mary is in charge of the educational and interpretive programs at the four state parks.

“I am very happy to be a part of this team,” she said. “Everyone is very nice, and they’re always willing to help. And I’ve learned a lot since I’ve been here.”

Although her position is with the Florida State Parks, it also falls under the Department of Environmental Protection.

“The Friends of Stump Pass citizen support organization membership has really grown over the past year,” Mary said. “The members are very passionate about supporting and improving the park, so it’s exciting to be a part of that. They’re all such a pleasure to work with.”

The park services specialist said the most challenging part of the job is combatting invasive species in all four parks.

“It’s really difficult to keep up with – especially in the summer months with all the rain we get. It’s a constant challenge for all of us.”

Mary is also the volunteer coordinator for the four parks, and in season the number of volunteers can soar.

She also works with a Florida State Parks staff biologist and records and documents different kinds of bird species for surveys each month.

“Most of the nesting birds have already migrated right now, so we’re not seeing that many on the beach,” she said.

Mary leads the “Sea Turtles Everywhere” programs at the four parks and does some communications and outreach projects for the parks.

Mary represented Florida State Parks at the Earth Day event that was held in April, and also the Great Shell Hunt that BIPS hosts every spring.

“The shell hunt is very popular; we actually had to cap it at 50 kids this year, and it filled up quickly,” she said.

She also had an educational booth for Florida Lighthouse Day.

When she’s not working, Mary has been enjoying the beaches and parks on this coast, and she’s trying to get out and explore new areas with her kayak.

“I’m trying to take advantage of being in a place that offers so many islands and waterways to explore.”

And of course, she enjoys riding horses whenever she has the opportunity.

She visits her parents and brothers in north Florida fairly often, and she’s looking forward to introducing them to Boca Grande.

You can meet Mary at the upcoming Pioneer Days festivities in Englewood scheduled for August 31 through September 2. She’ll have a booth there with educational information, and she’s also planning to offer seashell painting for kids at the event.

Newer PostShould I laugh or should I cry?
Older PostCode enforcement cases still in limbo, Pass cam gone because of complaints