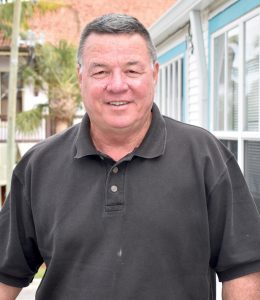 Capt. Mark Futch has brushed shoulders with many famous people in his days. He’s been a fishing guide for Neil Armstrong and helped him land a 115-pound tarpon. He’s also filmed scenes from his seaplane with stars like Colin Farrell and Denzel Washington.

“Running a saltwater seaplane is a very expensive operation,” Mark said. “I knew I had to supplement my income somehow when I first started out, so I registered with all the film-making companies and started getting contracts for commercials and movies in the late 1980s,”

Mark became familiar with commercial aerial filming when he landed a contract as a stunt flyer for a national television commercial for NutraSweet.

One thing led to the next, and he started shooting scenes for the movie “Gone Fishin’ ” in 1995. The film, starring Joe Pesci and Danny Glover, came out in 1997.

Mark is also a member of the Screen Actors Guild, a labor union that represents film and television principals worldwide.

Mark recalls when actor Denzel Washington was in Boca Grande to film the movie “Out of Time.” Parts of Park Avenue and even a shot of the Boca Beacon building can be seen in the film, as well as in a later one, Jimmy Buffett’s “Hoot.”

In between scenes, Denzel expressed an interest in fly-fishing, so Mark took him out on a boat and gave him some tips.

“About the third cast out, I told him to let the fly sink, and a ten-pound redfish grabbed it a few seconds later,” Mark said.

“We caught that thing and I cooked it for him for lunch. He is a really nice guy. Everybody on the set really enjoyed working with him.”

Mark was born in Winter Haven, Florida, and came to Boca Grande with his family as a young child.

“There were no bridges here in 1954, and my mother was not going to be stuck delivering a baby on the island, so she moved up with my grandparents until I was born,” Mark said.

His grandfather, Dan Futch, was born in Boca Grande in 1904, one of thirteen children.

His great grandfather, Frank Futch, came to the area in 1876 from Key West.

Commercial fishing brought them to the area. They shipped smoked mullet to Cuba and during Prohibition, traded American cigarettes for Cuban demijohns of rum.

“My family started stop-net fishing in Boca Grande,” Mark said. “A net spanning across the top of Coral Creek is pulled down to the mouth of the Creek where what is called a bank net. The bank net is staked up at the back side or stopped where the front of the net is on the bottom. When the mullet hit the bank net, the front of the net forms a purse. The Futch family set the all time record in this manner in 1947 catching 167,000 lbs of fish in one strike. Stop netting was outlawed in the 1980s. Our family’s name is well known in fishing on the island. There’s an old saying … Mark spent summers in Boca Grande and stayed on his grandfather’s stop-net lighter, where he would fish daily.

“It was fascinating as a child to be on the island,” he said.

Mark is a third-generation fishing captain and runs the charter boat “Sitarah.” He has more than 42 years of

experience guiding in Boca Grande Pass and has taken many celebrities out to catch their first tarpon.

Mark attended Clearwater High School and became interested in flying when he was a teenager. So after

graduating, he returned to the area and trained to become a pilot in Punta Gorda. He earned his commercial pilot’s license in 1980 and worked at Rotonda Air Service, which is now Coral Creek Airport. He became a flight instructor in 1985.

Mark met his wife, Kathy, in Venice when he was crossing Rte. 41 to call a friend to come pick him up. When he saw one car approaching and stuck his thumb out, to his surprise, Kathy stopped her car, and the two ended up dancing to the jukebox upstairs at The Pink Elephant.

“I was driving home from work and I thought he looked safe,” Kathy said.

They were the first to be married on Banyan Street in Boca Grande in 1975, later to be followed by both of their children.

“We lived across the street from the Community House, and we closed off the street and had a big party,” Mark said.

They later bought a house on Tarpon Street and lived there for 26 years.

They live in Punta Gorda now, but Mark is on the island for most of tarpon season.

“I still run the charter boat business,” he said.

Mark is also a two-time winner of The World’s Richest Tarpon Tournament and proudly wears the winner’s ring.

His grandfather was also a tarpon guide, when he wasn’t busy mullet fishing. He started guiding on Useppa Island in 1921.

Mark and Kathy started Boca Grande Seaplane in 1987 with the help of Bayard Sharp and his family. Kathy is the secretary for the business.

“The island residents made sure the business was successful – people loved being on that seaplane,” Mark said. “It was convenient for them to not have to drive to the area airports.”

Kathy went on to work in 1976 as island bookkeeper for many businesses and individuals, in their homes and later in her office next to Fugate’s on the island. She also served as Katharine Hepburn’s personal secretary.

In September, Mark spearheaded a relief mission for the victims of Hurricane Irma in Key West.

He brought food, water, gas and ice to good friends who were stuck in Sugarloaf Key as a result of the hurricane.

Mark and Kathy have two children: Matt and Rey. They both graduated from Lemon Bay High School. They now live and work in Orlando and Tampa.

“They’re very successful kids, and we’re very proud of them,” Mark said. “Boca Grande was so different when the kids grew up on the island; it was still a fishing village.”

Mark and Kathy have three grandchildren. Matt has a four-year-old, Francis Xavier. Rey has a three-year- old named Olivia, and an 18-month- old named Pierce Wolfgang.

Most recently, Mark has teamed up with Shoreline Seaplane services based in Massachusetts. He will be piloting an amphibious seaplane and will offer services to clients in Boca Grande and to all major airports. The comfortable, air conditioned 10-seater plane will also offer daily excursions to Key West and to the Bahamas.

“It’s going to be interesting,” he said. “There’s almost 9,000 nautical miles of shoreline in the state of Florida, including the rivers and the lakes, so it’s a preferred, natural way of travel for many people.”

There is usually water available to land in around most airports in the state.

Mark will be offering the on-demand seaplane taxi service seven days per week. He’ll be available to pick people up at the end of Fourth Street in Boca Grande and fly to any destination as needed.

To this day, Mark still is enthusiastic and appreciative of the life he has lived in Boca Grande.

“It’s been a very amazing ride, it really has,” Mark said.