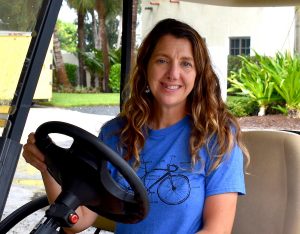 Lisa Sims, manager at Gasparilla Adventures, has been associated with Boca Grande since 2008. The first time she came to the island was to help with the wedding of Sarah Blakely (founder of Spanx) and Jessie itzsler at The Gasparilla Inn. The large celebration was the talk of the town, as wedding planners from New York City left no detail unnoticed. Greeting guests at The Gasparilla Inn’s fireplace mantle was the 30-person wedding party in the form of sugar cookies. The event took place behind The Inn in a tent reminiscent of a big top circus.

“Olivia Newton-John was one of Sarah’s favorite performers, and she actually made a guest appearance at the wedding and sang songs from the movie, Grease,” Lisa said.

“If you were here for it, it was an event you’d never forget.”

A new adventure is now available for people who rent a bike or cart and want to do a bit of exploring on their own.

“Our scavenger hunt app gives people a list of hints to find key points on the island,” she said. “Once you find them, you post a photo as proof, and it also makes for some good memories.” There are currently 22 items on the Scavenger Ox app, and more will be added soon.

“We tried to make it so people would have enough time to see everything during a two-hour rental,” Lisa said.

For the past 15 years, Lisa has been working for Darlene and Duane Zobrist, owners of Gasparilla Adventures. In 2005, the Zobrists formed a partnership with Jack Damioli, former manager of The Gasparilla Inn. They decided to launch Gasparilla Adventures and rent out bicycles and golf carts at The Inn. In 2016 the owners purchased the Gasparilla Adventures building on Park Avenue and moved the business from The Inn to the new building in July of 2016. Lisa currently manages the business. The words “Director of Get It Done” are printed on her business cards, because if there is a problem, Lisa will fix it. She oversees a staff of five during season. Most recently, she has spruced up the rooms at the Grande Flats/Village Inn. The building is owned by the Zobrists and managed by Parsley Baldwin. She reupholstered all of the furniture – a skill she learned from her grandmother – and added a fresh coat of paint on the walls.

Lisa has been working in Boca Grande and West Virginia since 2008, offering to fill in for staff in Boca Grande whenever she had the opportunity. She moved to Englewood about two years ago and is now living in Florida full-time. She had been coming to Boca Grande to work every other month when the business was still based at The Gasparilla Inn.

Lisa’s connection to the island dates back to 2004, when she began doing administrative work for Duane Zobrist at the Greenbrier Resort in West Virginia. “I had a lot of different duties up there,” she said. “I came to Boca Grande in 2008 and just fell in love with this island. I would always volunteer to help with events whenever there was a need.”

So in 2016, when the owners purchased the building on Park Avenue and needed someone to run the business, Lisa was offered the job.

She said she loves her job in Boca Grande because most of the time people are happy and on vacation and having a good time.

Originally from Lewisburg, West Virginia, Lisa moved to Clintonville, W.Va. with her family when she was in elementary school.

“My dad worked in sales for U.S. Steel, and we moved every few years,” she said. “It was almost like we were a military family.”

Her mom was a nurse, and her parents still live in West Virginia. They are planning to come to visit Lisa in September. She has one sister, Erika, who is a veterinarian and lives in Roanoke, Virginia.

Lisa met her husband Gary while they were attending high school. She earned an associate degree in business at Bluefield State College, and then Gary joined the Air Force and they moved to Tacoma, Washington for a year. They also lived in Anchorage, Alaska for three years.

“Anchorage was just beautiful,” she said. “It was an amazing place to live. There are so many places to explore. Denali State Park was just breathtaking.”

While living in Alaska, Lisa found a job selling pianos at a music store.

“Many native Americans there play the piano, and most play by ear and are self-taught,” Lisa said. “It’s a very cultural city.”

Lisa married Gary when she was 20, and they are celebrating 27 years of marriage this year.

Gary also woks on the island. He is a groundskeeper at The Gasparilla Inn. They currently live in Port Charlotte and have two daughters, Madison, 21, and Emily, 16. Madison is currently in her fourth year at Florida Gulf Coast University in Fort Myers, where she is studying marine biology.

“She was actually born in Anchorage, Alaska,” Lisa said. “She was super excited to learn that we were moving here full-time, because she wanted to live closer to the water.”

Emily works part-time with her mom at the bicycle shop on the island. Her plan is to become a police officer in the future.

When Lisa is not working, she enjoys gardening and planting flowers throughout the year. “I really enjoy being able to plant lush greenery in the winter months,” she said. “In the northern states I was only able to plant annual flowers for a few months.”

Lisa and Gary also enjoy exploring the state of Florida and taking one-tank day trips around the state. She relishes spending quiet days with her recue dog, a Chihuahua named Minnie that she brought with her from West Virginia when she moved here last year.