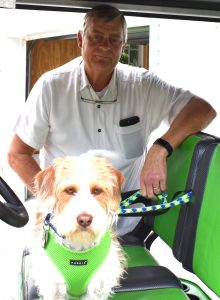 Lindsey Allen and his wife Ellen discovered Boca Grande about 14 years ago. After a successful career and raising two sons in Chicago, they decided that they wanted to spend the winters in a warmer climate.

He chose to study accounting because his father was a career Coast Guard officer with a finance background and recommended that it would be a wise career choice. And it turned out it was.

“My career began as a CPA in public accounting followed by several executive positions with manufacturing companies,” Lindsey said. “I retired from corporate life in 2007, but I continue to manage a family partnership on a part-time basis.”

Both sets of their parents lived in Florida, and they began exploring places all along the East Coast. “So we had plenty of reasons to come down to Florida several times each year,” he said. Then Lindsey read an article about Boca Grande. One winter they were vacationing in Naples, and they decided to take a drive up to explore Gasparilla Island.

“We had lunch at The Loose Caboose and started looking at properties that afternoon,” Lindsey said.

After graduating from high school, Lindsey attended West Virginia University and studied accounting, then went on to the University of Houston where he earned an MBA.

They have two sons. Andrew, a senior software engineer, is married to a young woman also named Ellen, and they live in San Francisco. They met in college and have the same birthday.

Mitch is an economic consultant and works in Washington D.C. He’ll be starting an MBA program at Dartmouth next year.

“They’re both good kids – both very smart. We are very proud and fortunate. And they love to come and visit the island. We had them here for a week last Thanksgiving, and Mitch will be coming down for Memorial Day weekend.”

Lindsey and Ellen have always enjoyed being dog owners. They have previously owned Rhodesian Ridgebacks, but after losing the last one, they found themselves looking into owning smaller dogs.

Ellen found Oliver on Petfinder.com, and she just had to meet him in person.

Oliver was rescued from Hardee County Animal Shelter and ended up at Canine Castaways, a Florida 501(c)3 non-profit. all-volunteer dog rescue service in Arcadia. The organization dresses up the rescued pets in costumes, posts the photos online and then ask followers to name the animals. Oliver was dressed as a businessman next to a rolled-up copy of the Wall Street Journal.

“Ellen has been involved with animal rescue organizations for years,” Lindsey said. “There is something special about rescues … it’s like they understand they have been given a new lease (or leash?) on life.”

Lindsey said that he and Ellen are very fond and supportive of Suncoast Humane Society, and they were looking at dogs available locally, but then they found Oliver.

“Animal rescue is a team sport — it takes many groups working together, because there is such a huge need,” Lindsey said. “We were looking for a smaller dog, and at the time Suncoast only had large dogs.”

They knew it was a match the minute they met Oliver.

“He would race around the room a bunch of times and then stop and jump up to see me. He did that for about five minutes,” Lindsey said. “Once he calmed down, I picked him up … and that was it.”

Oliver recently took the top “Boca Bowser,” award at the Boca Grande Woman’s Club dog show that was held in March. He also won the hound division (thanks to that dachshund blood).

“I wasn’t sure how it was going to turn out, because he’s not very fond of other dogs,” Lindsey said. “I don’t think he was socialized around dogs. But he behaved pretty well at the show at the right time.”

When they adopted Oliver, people kept inquiring about the dog’s genetic makeup, so Lindsey ordered a DNA test through Embark to find out the details. Embark is a company founded by Ryan and Adam Boyko. Powered by a deep love for dogs and a passion for understanding everything about them, Ryan and Adam have spent the last decade learning everything they could about dogs.

Oliver is 38 percent dachshund, 28 percent rat terrier, with a mix of Shih Tzu, Pekingese and Chihuahua.

“My brother said we now know more about his heritage than our own,” Lindsey said with a laugh. “They were able to trace back to eight grandparents.”

It has been estimated that Oliver is almost two years old. His second birthday will be celebrated on Mother’s Day, which is the day they found him in 2017.

“Most people on the island don’t know my name, but they recognize Oliver,” Lindsey said.

Since moving to Boca Grande in 2015, Ellen has taken up Mahjong and water aerobics at the Boca Bay Pass Club, while continuing to be an avid needlepointer.

“I in turn have taken up boating and fishing,” Lindsey said. “We joined the Lighthouse Methodist Church, which sponsors a wonderful community lecture series, and regularly walk the beautiful beaches searching for perfect seashells. We both continue to love reading, travel and avidly rooting for the Chicago Cubs.”

When Lindsey isn’t working from his home office overlooking the water, he keeps busy following baseball. He recently traveled back home to Chicago to see the Cubs play on opening day.

“I’ve been to every opening day except for one in the past 30 years,” he said.

One of Oliver’s favorite things to do on the island is to take a daily golf cart ride to pick up the mail at the post office.

“He was at the church office yesterday and received plenty of attention – which he loves,” Lindsey said.

Lindsey and Ellen plan on staying in their beautiful home in Boca Grande Isles until June, when they’ll head back up to Chicago for the summer.