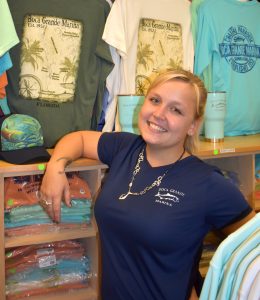 Leiah Goudy enjoys spending her days overlooking the bayou at the Boca Grande Marina. She has been the manager at the ship store there for the past four years.

Her earliest memories of Boca Grande include spending time at Uncle Henry’s Marina while her mom, Vicki Bergquist, worked as a waitress at the Casual Clam at the north end of the island.

“My stepdad was a private yacht captain, and he worked on a boat that was docked there,” Leiah said. “He would take me and my mom up to New Jersey and Maryland every summer.”

She recalls that when she was very young, she would stay in one of the rooms at the hotel (Boca Grande Resort) during the afternoon, and the workers would keep an eye on her until her mom finished her shift at the restaurant.

Her mom, Vicki, was originally from Indiana and moved to Englewood as a young woman. Her stepdad, Joe Bergquist, stills lives in the area and plans to get back to working as a private captain again in the future. He used to captain the 88-foot Galaxy that was docked here every winter.

“They always had to use the last space on the dock because it was so big,” she said.

Leiah grew up in Englewood and attended Englewood Elementary School, L.A. Ainger Middle School and then Lemon Bay High School. After graduating, she moved to Tampa with the intention of attending college, but instead she ended up working full time.

“It was so expensive to live there that I ended up working all the time,” she said.

She found jobs at Home Depot and a few other places until she was 21. Then she saw an opportunity to transfer to a Home Depot store in Englewood, so she moved back home. Having lived the busy city life in greater Tampa Bay for a few years makes her really appreciate being back on the island all the more.

“It’s just too busy, and I didn’t like that,” she said. “I love this area so much, and I don’t plan on ever moving away – I have no desire to live in any other large town again.”

After she moved back, she attended the State College of Florida in Venice and earned an associate’s degree.

“I took all the general courses, so when I go back to earn my bachelor’s degree it will only take two years,” she said.

She was offered a job by one of her customers and ended up managing a plumbing business in Englewood for a year, and then she heard about a position available at the marina store. A family friend knew the former manager and heard they were hiring, so Leiah applied.

“I started out working in the store four years ago, and the longer I’ve been here the more I appreciate it,” she said. “I really love my job.”

Some of her duties include making the schedule for the employees each week, ordering inventory and checking guests in and out.

“We check every person in and out just as if they were staying at a hotel – like a floating hotel,” Leiah said. “Whether you are staying at the dock or renting a golf cart, all the information gets recorded. We offer a full concierge service because each guest has different needs.”

She said some of the guests are just passing through, and others stay for one or two weeks or longer. There are currently four employees who work in the marina store, and the employees are cross-trained to do several jobs and fill in for one another on any given day.

The marina has 20 slips and can accommodate boats up to 100 feet in length. Leiah said if there is something a customer needs that the marina store doesn’t have, they call The Barnichol (hardware store), and the item can usually be found. Leiah does most of the ordering for the store, and she has fun picking out items that she feels her customers will like. From jewelry to clothing and souvenirs, she tries to order things that are unique for the island store.

In September, Leiah will be going to a trade show called Surf Expo that will be held at the Orange County Convention Center. The event showcases products like water sports clothing and accessories and trendy souvenirs and boutique items.

“It’s a lot of fun to look at all the new products that are available,” she said.

Leiah is often seen wearing items that are available for purchase at the store, like Performance T-shirts, earrings and other kinds of jewelry.

“I try to advertise our products as often as possible,” she said.

Leiah lives in Englewood with her three dogs: Rocky, a 13-year-old wolfdog; Sota, a seven-year-old German shepherd and Zooey, a one-year-old Newfoundland. She also has three cats: 20-year-old Mystic, and Bennie and Jet, siblings she adopted as kittens and named after one of her favorite artists – Elton John. She brought Zooey to work with her a few times while she was still a puppy last year.

“Some of the customers still ask how she is doing and when I’m going to bring her in for a visit.”

The furry companions take up much of her spare time when she is not working, but she said she’s looking to take on a new hobby in the future.

She fished with the SweetWater team in the 2017 Ladies Day Tarpon Tournament with Capt. Randy Rhines, but she didn’t catch anything. She did catch two in the 2015 Ladies Day Tournament, but one jumped off the hook before it got to the boat. That was her first tarpon tournament.

“It’s so much fun – I’d like to be able to fish more,” she said. “I usually work at least a ten-hour day at least five days a week.”

Leiah is fan of all things medieval and enjoys going to Renaissance festivals in the area, always taking the time to attend the Sarasota fair each year.

The living room in her home has a medieval theme, and she’s been adding to the décor whenever she finds new items. She even purchased a set of broken jousting sticks after a combat match from one fair.

“I love the jousting and the attire they wear,” she said. “If I ever get married, I want a medieval-themed wedding.”

Her favorite part about working in Boca Grande is meeting all the interesting people who visit the island.

She said the person she admires the most in life is her mom.

“She is one tough cookie,” Leiah said. “She’s been through a lot, and I think she’s really incredible.”

“We will be closing for two weeks later this summer for renovations,” Leiah said.

The next time you’re having lunch or dinner at Miller’s, stop in and say hi to Leiah.