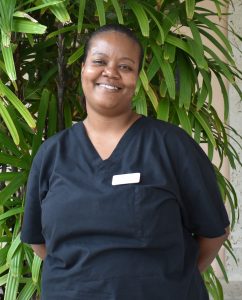 If you’ve visited the Boca Grande Health Clinic over the past few years, you’ve probably met Laquanda Dixon, the medical assistant at the health center. Laquanda has been working at the clinic for three years. Besides greeting and helping to care for patients, she also is the quality improvement coordinator.

She was born in Arcadia and moved to a small town called Bowling Green in Hardee County when she was a teenager. She graduatedfrom high school in Wauchula in 1998. Her goal was to become a nurse, and as part of her high school curriculum she was able to earn her CNA certification and start working in the field right after graduating.

“I wanted to be a neonatal nurse and work with babies in the delivery rooms,” Laquanda said. “I thought it would make a very enjoyable career.”

After high school, she moved to Tampa with the hope that there would be more job opportunities to begin her career. She quickly found work at a nursing agency, but after a few months she become homesick and moved back to Arcadia to be closer to her mother.

As time went by and she started a family, she decided to switch careers and pursue a career in the criminal justice field. She earned an associate degree online through the University of Phoenix. Then she found a job in Bowling Green, working at a juvenile residential facility for teenage females, and she worked there for several years. Then the court-ordered program was moved to Fort Myers, so Laquanda moved to Port Charlotte to make the commute easier.

“It was challenging, because many of the kids came from troubled homes,” she said. “And I had to learn new ways to communicate with them and help teach them new skills. It was difficult to earn their trust because of the situations they had experienced.”

Soon she was promoted to case manager, and she enjoyed that position because it allowed her to have more one-on-one time with her clients and get to know them better. “I was able to really connect with some of them, and it helped build and strengthen the relationships I had with them,” she said.

A few years later, the government decided to shut the program down, and Laquanda realized it was the perfect time to get back to her passion of working in the medical field.

“I was out of work for nearly a year, and that’s when I was blessed with my daughter, Syreniti.”

Syreniti is five years old, and Laquanda also has a 17-year-old son, Cameron. She is engaged to Leon Wesley, and they plan to have the wedding sometime within the next year. “He travels a lot for work, so that makes it difficult to set a date,” she said.

Laquanda met Leon in high school in Arcadia, and they reconnected a few years later through mutual friends.

They currently live in Port Charlotte.

After she had Syreniti, Laquanda saw an advertisement for Southwest Florida College and decided to further her education by enrolling in a two-year medical assistant program. She really enjoyed the coursework, and near the end of the program she participated in an 11-week internship at the Boca Grande Health Clinic.

“I enjoyed coming to the island every day and working with the staff at the clinic,” she said.

After graduating she worked at DeSoto Memorial Hospital in the emergency room department. She worked at the registration desk and was the first person the patients would see when they arrived at the hospital intake area.

“It was challenging, but I kept a humble mind when it came to dealing with difficult people and circumstances,” she said. “It was a good learning experience, and it taught me a lot about electronic health records and how to handle a variety of patients and situations.”

A couple of months later, Boca Grande Health Clinic staff contacted her about a full-time position that was available. Happily, she accepted it and has been enjoying working in Boca Grande ever since.

She said her favorite part about her job is the wonderful people she works with and the friendly island residents. “Everyone here is so nice to work with, and the doctors are great,” she said.

Some of her duties at the clinic include meeting and greeting patients, gathering patient health histories, preparing the patients for whatever procedure they will be having done and gathering data and other kinds of documentation.

She said the busiest times at the clinic are during spring break and other peak vacation times that draw visitors to the island.

When Laquanda is not working, she enjoys spending time with her family and watching drama television shows and horror movies. “I also like inspirational movies that have a meaning behind them,” she said.

She hopes to eventually be able to enroll her daughter in The Island School.

Laquanda is a fan of fish and has an aquarium filled with African Cichlids, which are defined as the ultimate freshwater fish because of their beautiful tropical colors. “They change colors as they grow into adulthood, and they’re really beautiful.”

She also enjoys dining out with her family at various Italian restaurants in the area. And she’s learned a lot about different types of food since working on the island. Her co-workers are constantly suggesting that she try new items from the local restaurants.

When she gets the opportunity, she enjoys going out dancing, but that is pretty rare with a 5-year-old to care for at home.

Laquanda’s mother still lives in Arcadia, and her father lives in Georgia. She has several brothers and sisters who live in Florida, Georgia and Hawaii.

She said she tries to surround herself with positive people and likes to help spread positive vibes.

Her pet peeves include slow drivers and dishonest people.

The next time you visit the Boca Grande Health Clinic, trust that you’ll be in good hands with Laquanda there to assist you.