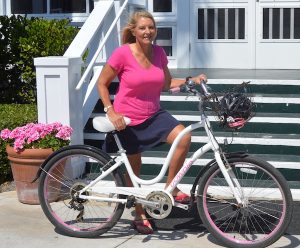 After working for more than 25 years in the television broadcast news industry, Boca Grande seasonal resident Kim Hume decided in 2007 that it was time to enjoy retirement.

Kim is the former vice president and Washington, D.C. bureau chief for FOX News Channel, also known as FNC. She was with the network from its inception in 1996 and was responsible for overseeing all Washington, D.C.-based news-gathering efforts for the network.

Before joining FNC, Hume worked at ABC News in Washington for more than 13 years.

She produced daily news coverage for World News Tonight with Peter Jennings. Before that she was a producer for Prime Time Live, The Health Show, This Week With David Brinkley and Good Morning America. Before being a part of the ABC News team, Kim, previously known as Kim Schiller, worked at WRC-TV in Washington, D.C. and KQED in San Francisco. She began her career in the newsrooms of KPIX in San Francisco and WAGA in Atlanta. Born in Oregon, Kim spent her childhood years in Washington state and her teenage years in southern California.

“I grew up all around the West Coast,” she said. Her dad worked for a cable provider, and she recalls her mother was a news junkie.

When she was 13 she worked in her dad’s cable TV office in California, and she remembers a show called “Good Morning L.A.” that was a test for the national show Good Morning America.

“I remember watching that and knowing that’s what I wanted to do, even though I didn’t entirely understand what that meant at the time,” she said.

“I think it was a combination of my parents that led me to pursue a career in television journalism.” Kim worked at the local CBS station in San Francisco while studying communications and earning her degree from San Francisco State University. At that time, entry-level news positions in a TV newsroom, called desk assistants, were almost all fill by males. It was the 1970s, so Kim’s was the first generation to see a significant change in the hiring of females for those kinds of positions.

“Suddenly people were more aware of the women’s movement, and they started hiring a mix of males and females to fill those positions,” she said.

Close to 30 years later, Kim was running her own network news bureau. “At the last point of my career at Fox, all five major news networks were led by female bureau chiefs. We had all worked our way up to the top. It was very interesting to see it grow from almost no women in the industry to five powerful female leaders.”

She was ready to pass her title on to a deserving replacement and decided to retire while she was at the top of her game. None of her colleagues could believe it. Even she found it hard to believe. “I loved my career and I was always working. I never really had a time in mind when I would stop,” she said.

“But I gave myself permission to say no to anything work-related for the first year after I retired. And by the time a year had passed, I had found comfort in that and was really enjoying my retirement.”

Kim plays golf about three days a week at a couple of different golf clubs in the area. She also enjoys yoga, pilates, spin classes, playing bridge and knitting.

“I knit golf club headcovers for the Woman’s Club and they sell them at their silent auction fundraiser gala every year,” she said. Kim started attending Bible study as soon as she retired, because she was never able to fit that in during her busy career. “Learning about the Bible is a fascinating journey for me. It’s where we get our morals and ideals.”

Kim met her husband, Brit, when she was working as a producer for Good Morning America and Brit was ABC’s Senate correspondent.

The couple went on to work together for 25 years at ABC and Fox News, getting married in 1993. Brit retired as anchor of Special Report in 2009 but now appears 100 days a year on Fox News as the network’s senior political analyst. Kim is the technician, camera and audio operator making the live television feed possible from their home in Boca Grande.

While they both have enjoyed successful careers, Kim suffered from addiction in her teens and twenties. “I started drinking way before I was under any sort of stress. I was a teenage alcoholic. The first time I ever had a drink, I was in trouble,” Kim said. She has been sober now for more than 30 years, but she admits it’s still a daily struggle. Her personal battle with addiction and the story of how she survived and triumphed has become the subject of talks and speeches she’s given since her retirement in 2007.

Kim speaks regularly at a variety of faith-based gatherings, combining her personal story and her passion for studying the Bible. She has a Bible-based blog, Vine and Branch, which can be found at kimhume.blogspot.com. She will tell her story of alcoholism and redemption as part of the Friends of Boca Grande Community Center program, “Lessons Learned from Living” at 2 p.m. on Thursday, March 16 in the sanctuary at St. Andrew’s Episcopal Church, 380 Gilchrist Avenue.

The talk was originally scheduled to be held in the Houghton Room at the Boca Grande Community Center, but more than 140 people have already expressed interest, which is more than the room could hold. Mother Michelle Robertshaw at St. Andrew’s graciously agreed to provide the church as a new venue so more people could attend. The talk is free, but you do need to call the Friends of Boca Grande Community Center at 964-0827 for a reservation. Serendipity led the way ro Kim and Brit in finding Boca Grande.

Brit attended the University of Virginia around the same time Will Farish went to school there, and Brit had always looked up to Will. Fast-forward to several decades later: Kim and Brit were visiting friends on Jupiter Island and were invited to play in the Gasparilla Island Cup Golf Tournament in 2005, soon after the new golf course opened at The Inn.

“Our friends were also mutual friends of Will and Sarah, and we knew Will from our news network contacts. So they invited us to come to Boca Grande for the tournament, and that’s how we discovered the island.” Kim and Brit, both avid golfers, bought a home in Boca Bay in 2015. They rented on the island for a few years before deciding to purchase a home. They split their time between Boca Grande, an apartment in Arlington, Virginia and their home on 72 acres of land in Hume, Va. – and yes, the town is named after Brit’s Scottish ancestors.

“We are very blessed to have such a good life, and we’re fortunate to be able to live in such beautiful places. I feel like I am in perpetual pursuit of spring,” said Kim.

Kim has a stepdaughter, Virginia, who lives in Maryland. Virginia has two girls: Mary Clare, 17, and Helen, 15, who will be coming to visit Kim and Brit this month.