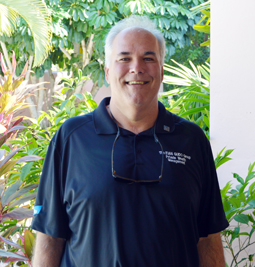 Boca Grande real estate broker Kevin Hyde was born in Port Jefferson, New York, and he’s been spending the summers in southwest Florida since he was 5 years old.

He remembers when he was a boy, staying at The Gasparilla Inn cottages where his father entertained business clients.

“The cottages didn’t have televisions then, so I’d go over to the TV room at The Inn. There was a room near the entrance with one black-and-white TV on a stand. Lawrence Welk always seemed to be on. Once in a while, I would get lucky and maybe catch an old Batman episode,” he said.

Although his father didn’t have a formal education, he was a tremendous salesman throughout his life.

“My dad was a serial entrepreneur. When he was a 6-year-old, he trapped muskrats and collected the skins and sold them. As a young man he became a butcher and sold meat from a mobile wagon,” Kevin said.

Later his father opened up a barbecue and sandwich restaurant, eventually owned a used car lot, and became a very successful auto wholesaler in St. Petersburg.

Kevin recalls that when he first received his driver’s license, he went to hang around his dad’s lot that afternoon, hoping he might get an easy deal. But no such luck. His dad lent him a beat-up old work van to drive until he could save enough money to buy his own car.

“Dad wanted me to know that you have to work for the things you want, and that really motivated me to work hard and save money, because that thing was a piece of junk,” he said with a laugh. Kevin’s parents divorced when he was five, and he lived with his mother in New York and spent summers in St. Pete Beach with his dad. Kevin and his mother moved to Pass-A-Grille near St. Petersburg Beach when he was 10. He finished elementary and middle school in St. Pete and went to Boca Ciega High School in Pinellas County.

Later, Kevin attended St. Petersburg Junior College, with a focus on business. “It was a really quiet place with hardly any traffic. Now they have big festivals there, and it’s become a much more popular place,” he said. As a journeyman cable splicer, Kevin started International Telephone Contractors and worked all around the country.

He was offered a job in Alaska in 1992, so he moved there with his family and lived there for 11 years. He was a senior manager at a telephone company, but he really didn’t like working a desk job. He was at the point where he was fully vested and able to retire with a pension from the company. Taking the advice of a trusted friend, Kevin took a union job as a cable splicer and traveled throughout the state, often working in remote native villages. “I did it to get a second pension,” he said.

Kevin moved to the Boca Grande area in 2002. “I always envisioned that when I got out of the telephone business, I would live in Boca Grande and be in the real estate business. I didn’t even consider going anyplace else – there was no question about it,” he said.

When Kevin joined the real estate industry in 2003, he was offered a position at Parsley Baldwin Realty. “I had known Brad Baldwin, so I went and talked to him and John Brandenberger. At the time they had no formal training for new agents. I knew I had a lot to learn and asked about training. They suggested I might work as Mike Houlihan’s assistant. I knew that just wouldn’t work, so I didn’t take the job,” he said. So he accepted a position with an off-island broker with an extensive training program.

“They promised to open an office on the island, but when it became clear that was not going to happen, I went to Gasparilla Properties and stayed there for about eight years.” When the partners at Gasparilla Properties began the process of changing direction, Kevin went to work for a new broker on the island, but after three years he determined he wanted to get back to a small, family- owned brokerage and eventually he chose Parsley Baldwin. He currently is a broker associate with that organization.

“I look at my job as being more of an educator than a salesperson. Most people on this island have gotten to the pinnacle of success, and they know what they want. So educating them about our island’s lifestyle and property values is a big part of my job,” he said.

Kevin is part of “Team Hyde” – a partnership he shares with his wife, Nancy, at Parsley Baldwin Realty on the island. Kevin met Nancy in Boca Grande in 2009, while they were both working at Gasparilla Properties. They became husband and wife in 2012 in a small beach ceremony in Pass-A-Grille at the Don Cesar Resort, with just family and close friends attending.

Kevin and Nancy love dogs, and they have a four-year-old Spinone Italiano named Enzo.

“It’s an ancient Italian hunting breed. I’d wanted one for years, so I chose a breeder in Virginia, because they raised the dogs at home and didn’t keep them in kennels,” he said. They also have a 9-year-old Yorkie-Chihuahua mix named Toby. The dogs get along well, although Kevin said that since Toby is older, he can get a little testy when Enzo is in a playful mood.

“They’re pals, and they both have good energy, but Enzo is so much bigger, and sometimes he plays too rough,” Kevin said.

When Kevin lived in Alaska he had his own rescue kennel. There wasn’t a formal group in the area that did that kind of work, so he would literally travel around responding to calls about loose or unwanted dogs. “That kept me very busy,” he said.

When he is not working, Kevin enjoys tarpon fishing, boating and going to the beach with Nancy. They also enjoy traveling whenever possible. Kevin is a nonvoting member of the Boca Grande Fishing Guide’s Association, but since he did so much fishing in Alaska, he doesn’t do as much of it these days.

Kevin is a member of the Boca Grande Historical Society and Royal Palm Players. He said he deeply admires his father for the values he instilled in him, but when asked about the person he admires most in life, he said it is his wife Nancy, for whom he coined the apt nickname “Pretty” soon after they met.

“A few years back I was in a dark place after my mom’s and dad’s deaths, as well as the loss of my two 17-year-old dogs, Bammer and Buck. It all happened in a very short period of time. If it were not for her love and support, I don’t know what my life would be like today. She is everything to me, and I truly respect and admire her,” he said.

Kevin’s son, Evan Guido, is a senior vice president at R.W. Baird in Sarasota. Evan and his wife Brittany have three children: Olivia, six, and Hudson and Savannah, 4-year-old twins. Nancy has a son, Colin, who lives in Michigan, and a daughter, Devon, who lives in Venice with her husband Nels. They have two children: Clayton, one and Caylee, six. Kevin said the best part about working in Boca Grande is the people.

“This community has been a very big part of my life for a long time. I love it here. Some of my best friends are folks I’ve met on the island,” he said.