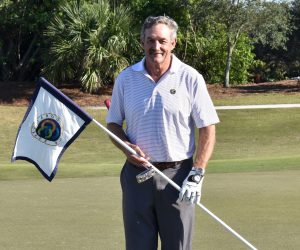 Coral Creek Club Golf Professional Ken Raynor has spent abundant time on the green and also fishing with many dignitaries who regularly visit Boca Grande for a little rest and relaxation.

Ken met former President George H.W. Bush in Kennebunkport, a coastal town in southern Maine, before Bush was elected president in the 1980s.

The Bush family would spend their summers there, and Ken worked as golf pro at Cape Arundel Golf Club. Ken has been golfing with the family ever since.

“41 is the kind of guy who makes you feel at ease,” Ken said. “He’s very much a people-person. He has a very kind soul. He’s become like a second dad to me and my wife, Anne.”

Ken said what makes Boca Grande so special is the people who come here.

“They want to live life to the fullest and experience all the recreational things that the island has to offer: whether it’s fishing, hiking, kayaking, boating, tennis or golf – we have a nice niche where the value of life is very good.”

Originally from New York, Ken moved to Maine in the 1970s.

After earning a degree in economics, his passion for golf led him to accept a position at a club in Delray Beach, Florida. He was on the golf team in college and worked at various clubs up north during the summer breaks.

“When I had the opportunity to work in Florida for the winter months, of course I took it, and then went back to Maine in the summer and upgraded my skills.”

Ken is a member of the PGA of America as a golf professional. He refers to golf as his business, and fishing as his passion.

“Golf is my office job – it’s still a passion of mine – but fishing is relaxation.”

Ken and Anne have been coming to Boca Grande since the 1980s, before their son, Kyle, was born. For the first few years, they rented on the island.

He recalls playing golf at The Gasparilla Inn & Club in the 1980s when Bob Kinard was the golf pro there, back when Mr. Sharpe owned it.

Although golf is his livelihood, Ken said his passion for fishing is what originally brought him to Boca Grande.

A fishing guide introduced Ken to Bob Melvin and the two became close friends. They worked together on the development of Coral Creek.

Ken was introduced to Mr. Mote (of Mote Marine Laboratories) when the concept of the idea for Coral Creek Golf Club came about. Mr. Mote envisioned something like a golf/fishing club on the property to fully take advantage of the naturally preserved area.

“We talked about adding a Tarpon pond, to be environmentally conscious, and the area certainly lends itself to that concept,” Ken said. “We still try to involve fishing in some of our events here, we have fly casting lessons from the range … we try to maximize the use of the facility as much as possible.”

Anne is also an avid golfer and Ken organizes trips throughout the United States, and internationally where a group of golfers can spend a week playing the courses of the area, and then visiting local restaurants and wineries, depending on the destination.

“We take members of the club to play in tournaments against members of other clubs, and sometimes we’ll do tournaments overseas, and pair that up with a wine tasting and make it a fun, positive experience.”

Ken is an passionate fly-fisherman, and he appreciates the hunt and chase for the fish more than the catch.

“I like the presentation of fly-fishing,” he said. “I always have, both in river and saltwater. I also enjoy making my own flies.”

Ken said fly fishing is very similar to golf in that every experience is unique: “You can be out in the ocean, on the flats, in a river or on a lake … so you’re always changing your presentation, just like on different golf course terrains.”

The family also enjoys skiing at various destinations in Colorado and around the west coast.

Locals who have spent time on the island 20 years ago might recall Kyle riding around on his little blue bike when he was a young boy.

“He learned how to ride a bicycle and build sandcastles in Boca Grande as a kid – and now he works for the Boston Red Sox.”

Kyle currently lives in Boston, and is in premium sales for the Red Sox.

Ken proudly attended the 2013 World Series with his son when the Red Sox won the title. Ken and Anne recently went to Boston to visit him for Christmas.

Kyle will be coming to Florida for the 2018 spring training season in Fort Myers, and Ken is looking forward to spending some quality time with him next month.

Ken recently co-authored a book “I Call Him ‘Mr. President’ – Stories of Golf, Fishing, and Life with My Friend George H.W. Bush.”

He teamed up with morning radio show DJ Michael Patrick Shiels and published the book in 2017.

He said he felt like writing the book was second nature to him because of the nearly 40 years the families have known each other.

“I think it’s a wonderful tribute to the value of our friendship, and I think it will help people see the former president from a personal side instead of the political aspect that the public

The Raynors have shared many meals with George and Barbara, and they’ve had the pleasure of staying in the Lincoln bedroom at the White House on several occasions during his presidency.

Ken said the former president is a practical joker, and he shares a few behind the scene stories in the book that hopefully will make readers smile and laugh. The book also includes personal letters written to Ken by Bush over the years.

Kyle took his first steps in the Lincoln Bedroom of the White House when he was about 1-year-old.

“Of the many times we’ve spent there … it still seems surreal,” he said. “All the history that has happened over the years, and we find ourselves sleeping in the Lincoln bedroom and sitting at his desk. Those are some incredible life memories. We really value our friendship with the Bush family very much. And who would have thought after George H.W. served as president … that his son, a governor from Texas, would be serving eight years later down the road.”

Ken and Anne will be heading back to Maine in May, when the season up north starts to get busy.

The 2018 Florida Mid-Amateur Championship golf tournament will be held at Coral Creek in May.

Ken’s book is currently available for purchase at the Coral Creek Club and on amazon.com. It may also soon become available at stores on the island.

A potential book-signing event is planned to be held sometime in February. Keep reading the Boca Beacon for updates.