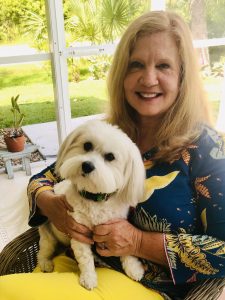 From menus to matinees…

BY OLIVIA CAMERON- Throughout her life, Kathy Kelleher has been drawn to the theatre. As managing director for the Royal Palm Players, she’s worked behind the scenes to accomplish RPP’s mission to entertain, educate and engage the Boca Grande community.

Her childhood memories consist of growing up on the coast of Cape Cod, Massachusetts.

“It was a beautiful, idyllic place to grow up in, with beaches and family close by,” said Kathy. Her life was hardly dull, surrounded by five brothers and sisters.

Since she was 14, Kathy has become familiar with working late nights in the restaurant industry. As the oldest child, she took on great responsibility following her mother’s passing. “My mom was a stay-at-home mom. She wanted to work, but she got ill. In 1975, she passed away from breast cancer at the age of 36, which left my dad as a widower with six children.”

“My dad graduated from Stonehill College and got into the restaurant business after my mom died,” said Kathy. “He became an innkeeper on Cape Cod, where he learned how to run a restaurant. At that point he opened his own restaurant, which we still own all these years later, even after his passing two years ago.” That oceanfront establishment, Horizons, is still in operation in Sandwich, Massachusetts.

Kathy recalled her dad’s passion for the entrepreneurial industry throughout his life. After he found success in his endeavors, he remarried and relocated to Siesta Key, where he opened another coastal restaurant called Turtles.

“As the oldest and most responsible, I started working hard early in life. I was always the one who held the family together and organized gatherings after my mom passed,” she said.

At a young age, Kathy married a man who was also in the restaurant business. “By the time 1984 rolled around, I had three children and was still living in Cape Cod.”

After Kathy grew tired of working a seasonal position where the winters were bare, she kept her eyes peeled for a year-round opportunity.

“When my kids were of school age, I went back to Cape Cod Community College in 1990. I had focused on business with art studies on the side,” she said. She earned a two-year degree and spent the next five years as a conference service manager for various hotel chains. “I absorbed a great deal of organizational and hospitality skills.”

Kathy was divorced by the time she met her new life partner in Cape Cod around 2004. Both with grown children, Kathy and John Gale decided to build a new life in Florida after the area was recommended by her father. “My dad encouraged us to move to Englewood and always told me about how beautiful Boca Grande was. He had actually built his home in Siesta Key based on the Boca Grande style of houses.”

Kathy moved to Englewood during the peak of the housing market. She found Englewood to be secluded and appealing, but despite her fondness for the quiet town, she felt there was a lack of opportunity for her there. She took a job working in the bookkeeping department of Marie Selby Botanical Gardens in Sarasota, which required a lengthy commute over the next five years.

“I enjoyed the nonprofit sector but wanted a closer commute, so I started looking at jobs in Boca Grande. At the time, my dad wanted me to apply to The Gasparilla Inn and reconnect with the restaurant business, but I wasn’t too interested in getting back into that,” she admitted.

Kathy came across an ad for Royal Palm Players in 2011 and joined the staff of two. “I was hired by the artistic director at the time to be the bookkeeper and office manager. We worked alongside the administrative assistant at our location across from the Temptation,” she said.

The following year, RPP restructured and she became the only remaining employee. “The board of directors changed, and with the help of Erica Ress and Dan Headington, we re-imagined the organization. We changed the presentation of plays and geared the shows toward out island residents and patrons. Cheryl, Dusty Hopkins’ wife, and Erica rebooted the Kid’s Drama Club and moved it to the Island School.”

Kathy recalled their first musical that year: “Godspell,” performed at the Methodist Church. It was a hit. Tickets were sold out and people were standing at the door hoping for no-shows. The volunteers and actors lifted RPP off its feet.

By 2014, RPP gained a presence as well as visibility at the Community Center. Now in her tenth season collaborating with RPP, Kathy has found her job as managing director fulfilling. “I’ve learned so much about the theatre and have had many mentors along the way. We were growing exponentially up until COVID hit us during our musical, ‘Nunsense,’ and we had no choice but to shut down.”

Despite the limitations that came with their switch to Zoom meetings and their YouTube presence, the actors and directors of RPP are planning a comeback. “One thing we want people to know is that RPP is here to stay,” said Kathy. “We are working on getting plans for the season. It was just decided that we will not be able to perform in-person through December. However, we plan to come back in full swing by January, whether we have to use a tent or stay six feet apart in the auditorium.” 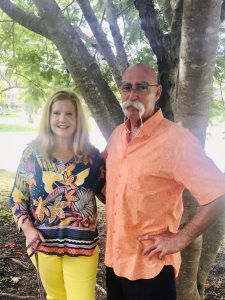 With their plans to bring entertainment to the island again next spring, Kathy has been reminded of what she’s missing. “I miss going to visit my family that remains in Cape Cod,” she said. Luckily, two of her five grandchildren and one daughter are Englewood residents.

Without her time spent behind the scenes on plays, Kathy has found her time with John valuable. “When we first moved here, we joined the Harley Davidson riders with the new dealership in Port Charlotte.”

Fifteen years later, however, John experienced a few medical conditions, which caused the pair to stray from their frequent rides.

Recently the pair has been involved in the New World Celts nonprofit organization to provide scholarships for Celtic drummers, Irish dancers and musicians within the culture.    “Given that my position with RPP is somewhat seasonal, I’ve had a great opportunity to spend a lot of time with my family in Cape Cod over the summers- at least until now.” Now Kathy looks forward to a busy spring in Boca Grande and another summer in Cape Cod.