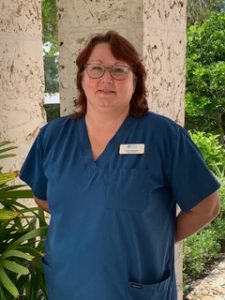 Love is the main ingredient of her recipes…

BY OLIVIA CAMERON- Nothing evokes the beginning of a season here on Gasparilla Island quite like the thought of sweets and pastries. From cakes to cheesecakes to cake pops, local bake master and certified medical assistant Kathy Abraham brings her baked goods for her coworkers at the Boca Grande Health Clinic to taste during a day shift. She finds joy in bringing smiles to faces, whether that’s by helping a patient or striking a customer’s taste buds.

Before she began her baking business, A Baker’s Mission, or her career in the medical field, Kathy was growing up between Mississippi and Michigan. In the 90s, she met and fell in love with her husband, Matt. At the time, Kathy was working at a mental health group home while Matt was roasting pigs for people.

“Cooking was his hobby and baking was mine,” said Kathy. “He’d been interested in cooking like that since he was a teenager. But for me, baking has always been my forte.”

In 2009, the pair moved to Port Charlotte, away from the slush and over to the sand. Eleven years after staying at home, Kathy decided to attend college courses in the medical field. She found herself taking part in an externship at the Boca Grande Health Clinic. She stayed at the Clinic through a season before finding a position at a Millennium medical office.

“One night at one of the high school football games, I ran into Debbie Han from the Clinic, who wanted to know if I was interested in returning. I was,” said Kathy.

She made her way back to the island in 2016 and was glad she did. Kathy now works weekdays as a certified medical assistant at the Clinic.

Kathy and Matt enjoy experimenting with their own recipes. She had seen their passions as delightful hobbies until they both decided to grab the bull by the horns.

“One year, my brother-in-law built a roaster for my husband, and his passion for cooking grew from there,” said Kathy. “For me, I started with A Baker’s Mission.”

Through her career path, Kathy was mastering her icing skills and experimenting with ingredients to open A Baker’s Mission.

“Baking is an art form that is acquired over years of practice. It’s always a learning process, but I think my skills have improved,” said Kathy.

Her experience came from baking birthday cakes and church function desserts. On a mission trip to Venezuela, Kathy picked up techniques from a master baker named Isabelia.

“I learned to make love the main ingredient,” she said.

Kathy started A Baker’s Mission under the Florida Cottage Food Law, which allows individuals to sell certain foods made in a home kitchen. She then took it a step further and became a licensed baker.

“I have baked all kinds of things,” said Kathy.

She can whip up specialty cakes, bakery rolls, cookies and sweetbreads.

“I also like to make something called gooey bars, which are a cross between cake and cheesecake. I can also make macarons, different from macaroons. They are made with almond flower and egg whites rather than shredded coconut. They have a finicky and 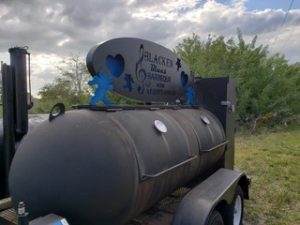 With her skills as a master baker, she teamed up to work with Matt and bring his delectable BBQ to the community. Together, they cater to the public with their business, Blacken Blues BBQ and A Baker’s Mission. Matt is the chef and pit master, while Kathy brings her sweet treats to the table. Kathy enjoys the catering business because she and her husband are able to put their profits directly back into the community.

“We would volunteer for the homeless coalition, cooking and serving there, but it comes out of your pocket when you do stuff like that. So we wanted to see how we could fund our community involvement. That was one of the main driving forces of starting the catering,” said Kathy.

“I got the idea for the cake when my daughter and I went to IHOP one morning. It was one of their pancake specials, and I told my daughter it’d make a great cake. Many people ask for the recipe, and most of the time I’ll give it to them,” she said.

Together, Kathy and Matt cater to local barbecue connoisseurs and satisfy those post-dinner chocolate cravings.

“The best thing about catering is seeing the look of enjoyment on people’s faces,” said Kathy.

Of course, restaurants have taken a hit through the beginning of the pandemic, Kathy and Matt’s business included.

“It’s been a hard adjustment. We had a lot scheduled for March and April that usually helps when the summer is slow. We took a bit of a hit, but the good Lord always provides,” said Kathy. 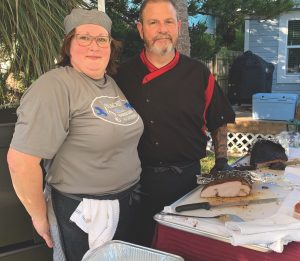 In the meantime, they were able to hold cooking events each month, detailed on their Facebook page. That way, they were able to provide pickup and delivery services for people without putting anyone at risk of contracting the virus. Kathy is hoping to pick up speed once people are able to have social gatherings again.

At the Clinic, Kathy hasn’t let fear get the better of her. She and the staff are working to limit the risk of exposure to both the employees and the patients.

“You can’t let fear override you, but instead just take care of yourself.”

Even their free time consists of cooking and perfecting recipes and smoked meats.

“We don’t go out to eat that much, but when we do, we crave everything but barbecue,” Kathy laughed. “Matt has been working from home this year, so he typically has dinner ready when I come home. He cooks so well that it’s hard to pinpoint a favorite meal of mine.”

Kathy continues to bring mouthwatering pastries to her smorgasbord of baked goods. Lately, she has been enjoying whipping up a pan of cinnamon rolls with a sugary glaze.

“My coworkers like it when I bring them in to the Clinic, too.”