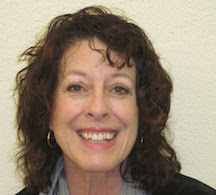 Royal Palm Players has gained another new talented member who has been busy planning and rehearsing for productions starting this fall.

Kate Ingram, wife of well-known RPP director Tad Ingram, formally joined the organization when the couple made the decision to move to the area over the summer. Tad has been directing musicals in Boca Grande for about 10 years.

Before moving to Placida, Kate was a full-time associate professor and graduate acting program coordinator at University of Central Florida in Orlando for 19 years.

Prior to that, she taught at a state college (New Paltz) in New York for 14 years. It was about 70 miles north of New York City and Tad would commute and produce Broadway shows on a regular basis.

About 14 years ago, Kate and Tad were invited by a mutual friend to come and perform at the Orlando Shakespeare Theater.

“We came down and did a mini 3-week production and realized how much we liked Florida, and decided it was time to make a change,” Kate said. “Coming from New York to Florida, I had the opportunity to both perform and direct, so that was a nice change.”

She became hooked on acting in junior high school when she first saw the musical My Fair Lady.

“I was very passionate about voice and dialect, and I memorized the entire show.”

She performed in several high school musicals and decided that’s what she wanted to do as a career.

After teaching in New York for several years, Kate and Tad went on to earn their master of fine arts degrees at The University of Alabama.

“We were part of the inaugural class at the Alabama Shakespeare Festival,” Kate said. “All of our class work was done at the festival shows. The main reason we chose that path is so that we could teach at a university setting.”

Kate said in a way, teaching is kind of like improvisational acting, because essentially, you are on a stage in front of a group of people and you don’t know what kind of things they will be asking.

“It was a very rewarding career, but it was time for me to try some new things.”

As professional actors, Kate and Tad have done quite a bit of dinner theater performances, so with the addition of the new upcoming dinner shows in December and January, they will be valuable resources in planning and organizing the performances.

The dinner tables are going to surround the theater stage, so all of the seats will have good views. The tables seat 8 people and it is a one act, on hour comedy show.

“Hands Across the Sea is an action filled comedy,” Kate said. “The setting is Britain in 1936. So much happens, the characters are very funny and I think the audience will really enjoy the show.”

Kate will be directing the performances. This will be her first RPP production.

“It’s fun, uplifting and joyful and I think when we have a chance to work on something like this …. it lifts our spirits.”

When it comes to naming a hometown, Kate refers to herself as a “sales brat” because she moved around quite a bit throughout the northeast due to the nature of her father’s work.

“But I actually think it taught me to be flexible and outgoing because we were always meeting new people,” she said.

Kate has been involved in productions and readings with the Orlando Shakes acting program since 2002. she has taught acting, dramatic literature, and voice and speech for three decades. Her training and experience include intensive study with British Theatre Director Cicely Berry and Meisner technique training. Some of her previous roles at Orlando Shakes include: Desiree in A Little Night Music, Beline in Imaginary Invalid, Gertrude in Hamlet, and Elmire in Tartuffe. Roles at Theatre UCF: Claire in The Visit, Eliza Gant in Look Homeward, Angel, Fonzia in The Gin Game, Sister Aloysius in Doubt, Martha in Edward Albee’s Who’s Afraid of Virginia Woolf?, the Woman in Veronica’s Room, and Queen Eleanor in The Lion in Winter, which is RPP’s fall show playing through this Sunday, Nov. 17.  Kate is a proud member of Actors Equity Association.

One of her former students at UCF, Josh Gold, will be directing the RPP musical “Nunsense” this spring. Performances are planned for March, 2020.

Kate received her bachelor in arts degree from Syracuse University, and earned a master’s in fine arts from the University of Alabama.

Kate and Tad have been married for 44 years.

They met in New York City after she received a contract with a professional children’s theater company, and Tad was part of that company. The play was “Aladdin and the Magic Man.” Kate was cast as the princess. She became very good friends with Tad, and by the time they did their second show together, they were in love.

For the first few years of their marriage, they  traveled together for various shows.

“We made a pact that when we started a family, the first one to get a job offer would accept it, and the other would stay at home.

They have one daughter, Hannah, who is an actress/director at Barter Theater in Virginia. Hannahholds a Bachelor of Fine Arts in Musical Theatre from the University of Michigan in Ann Arbor. Kate believes her daughter caught the “acting bug” when she was a child as well, since her parentswould take her to auditions and rehearsals starting from when she was a baby.

“It was cheaper than a babysitter and I think it was entertaining, too,” Kate said.

They have gone to see Hannah perform in many shows in Virginia over the past 11 years, and they’re looking forward to their daughter visiting Florida soon.

When Kate is not busy with RPP productions, she enjoys swimming, sewing and traveling to new destinations during the summer months.

Kate and Tad live just off island with their black Lab mixes: Ben and Mac.

The teacher/director said she is excited to be working with RPP, and hopes to hold more discussions regarding expanding programs and opening the organization up for future growth. There has been some talk about doing more readings, and also getting some new people involved. RPP has recently revamped the lighting and the acoustics system at the community center, and they also have a mobile unit that they will be using at the Boca Grande Power House so there will be staged sound and lighting.

“I’m so happy to be here — the people here are fabulous,” Kate said. “I love community theater, and this has been a very warm, welcoming group of people to work with.”

The Royal Palm Players are celebrating 30 years of productions this year.

Tickets are still available for the December dinner shows, so be sure to reserve yours soon. The January events are almost sold out.