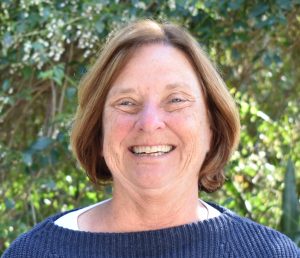 She’s held several executive-level positions for numerous companies up north, but here in Boca Grande, Karen Grace has embarked on a few exciting adventures that are key to this community.

Karen is currently the president of the Boca Grande Historical Society. She’s served three years on the board, and will be starting the first year of her second term in April.

“We have a small group of people who are very passionate and contribute in so many important ways,” Karen said. “Our new archive system on the website is comparable to what large museums offer, and we are very proud to be able to offer it to the community.”

Her father loved to study history, so she believes her fondness to learn about the origins of places may have been passed along through him.

Karen grew up in North Olmsted, Ohio, a small town just south of Cleveland. Her family had lived there for several generations.

She attended Wilson College, a private liberal arts school in Pennsylvania. She was a French major and history minor and was editor of the college yearbook. She also wrote for the college newspaper. Originally she wanted to pursue a career in publishing, but a job offer changed that.

After college she went to work for a stockbroker in Cleveland. She worked in research, which she said was a perfect job for a recent college graduate.

“I knew how to research and I knew how to write. I can’t say I knew much about stocks, but I learned,” she said. “It was a very interesting first job, and it allowed me to use skills that I already had.”

A few years later, Karen accepted a position with Industrial Publishing Company in Cleveland. She was an assistant editor for a trade magazine called “School Product News,” which sold anything that might be utilized in schools.

“We rewrote a lot of press releases, but we were able to do a few feature stories as well,” she said.

She later went on to work for a company called Predicasts, a business that specialized in economic forecasting. She was part of the public relations and marketing department.

“It was an interesting position because it was a combination of what I’d done in my two former jobs,” she said. “But this time I was the person going to New York and talking to editors about our company and trying to get coverage.”

When that company fell on hard economic times, Karen found a position through an employment agency. An employer saw her resume and asked her to interview for a position that was vacant, but it was entry level and she was way overqualified.

She agreed to the interview, and a manager at the company promised her a position in marketing. Sure enough, two months later she was promoted.

It was a cookware company, and Karen was asked to go to New York and meet with a chef who would be marketing the products in department stores.

“The housewares section of a department store was set up very differently back then,” she said. “We would set up cooking demonstrations all around the country. When I think back on my career, I didn’t actually plan it, and I would not have wanted to, because the things that happened were beyond what I would have imagined.”

Karen met her husband of 51 years, Jim, when they were in high school. They dated for a couple of years, and after they graduated, Karen headed off to Pennsylvania for college and Jim headed out to California with a few of his friends.

“We wrote letters and stayed in touch, and when he came back to Cleveland, he drove down to visit me at school and we’ve been together ever since.”

Jim worked in manufacturing and eventually in the advertising department for Bonne Bell cosmetics.

Karen wrapped up her advertising and sales career working for American Greetings Corporation.

She earned an MBA from Cleveland State University by attending school at night.

Growing up, Karen spent a lot of time in Sarasota and Siesta Key. Her uncle was a builder in Sarasota, and her grandparents lived there. Jim’s grandfather lived in Coral Gables. She recalls that there weren’t any buildings that were more than two stories tall.

In 1975 Karen and Jim came to Florida to visit friends in Key Biscayne. They would usually take a road trip to explore different parts of the state, and that year they visited Boca Grande.

Like many others, when they saw the island, they recognized the old Florida charm and immediately realized they wanted to live here.

“It was like going back to the Florida we knew when we were children,” Karen said. “And we loved it.”

She recalls there was nothing on the island north of 30th Street, and they treasured the quaint, small-town feel. They had dinner at The Temptation Restaurant and met the owners at the time, Frank and Martha Smith.

Over the years, Karen and Jim started taking more trips to the island every winter, staying at The Gasparilla Inn and The Innlet, and they eventually purchased a home on Damficare Street. They became very good friends with the Smiths, and they purchased The Temptation from them in 1990.

She recalls that there were just a few businesses on Park Avenue in the 1980s, and the railroad depot was boarded up.

Karen met Betsy Joiner one summer while they were both staying at the Boca Grande Club. It was August, and they were the only two people in the pool, so they struck up a conversation. They’ve been good friends ever since.

Karen and Jim owned and ran The Temp from 1990 until 2014. They added the Caribbean Room to accommodate larger parties.

“It was fabulous. We had so much fun – it was a real community of fishermen, visitors and friends.”

Karen said her favorite part of running the place was the people – the customers and the employees who worked there. And the building itself was a gem she knew had to be preserved.

“The Temp is actually a Boca Grande institution,” Karen said. “It’s been here long before us, and it will be here long after us. We don’t feel like we owned it … we were just the caretakers of the place for a while. It’s a product of time. It belongs to the community. Jeff, Kevin and Andy are doing a great job running it now.”

Karen and Jim spend the summer months in Montana, where they enjoy boat trips along the river and taking in the scenic mountain views.

Recently Karen has been busy helping to organize the Boca Grande Historical Society’s events for the season.

“Railroads, Phosphate and Real Estate,” the new exhibit at the History Center, was opened to the public during the “Railroad Week” celebration in November.

“I still love to research and write, so working with the Historical Society has been an absolute joy.”

The next event will kick off the annual “History Bytes” series scheduled for February each year. The first presentation is planned for Wednesday, Feb. 6 at 11 a.m. at the Johann Fust Community Library. Frank Newlin will be the speaker.

Karen and Jim live at the marina village on the island with their seven-year-old dog, a Newfoundland named Huckleberry.