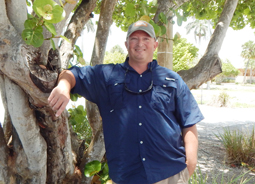 Justin Davis didn’t know Boca Grande existed until he helped a friend move to the island 21 years ago.

A college student at an Indiana community college at the time, he and his childhood friend drove 24 hours straight and landed in the front of The Temptation around 2 a.m. on a Saturday night/Sunday morning. They heard music and pulled into the alleyway and saw the entrance to the Caribbean Room.

“I was totally mesmerized by the place. The street was filled with people, and the bar had a rockin’ band playing and a big party happening inside – I knew right that night I didn’t want to go back home,” Justin said. So he didn’t. He stayed on the island for a few days and found a job working in the kitchen at The Theater (now PJ’s Seagrille).

He eventually went back home for a few days to pack his belongings and withdraw from his classes, and then he came right back to Boca Grande. “My parents were so angry, and my college professors said I was crazy – but I didn’t care. It was March up there, snowy and cold, and sunny and beautiful down here. And I’ve always wanted to live on an island.” He was a bit familiar with the area, as he had an aunt who attended Ringling College of Art in Sarasota in the 1970s, and he would come down with his parents to visit her in the winter.

As a young 22-year-old man, he said it didn’t take long to get used to the island lifestyle of fishing every day and enjoying the cool nights outside talking with friends. But one particular event taught him the definition of “island time.” “A few of us decided that we were going to play volleyball at the community center one Sunday at noon and have a cookout. I was excited so I got there early. Noon had come and passed, and I waited around until about 1 p.m. Then one of the guys arrived on a golf cart and explained that noon ‘island time’ means around 1 p.m. – or later. And I’ve never forgotten that,” he said.

He worked at The Theater for a few years and then at some other places on the island. Then he took up doing odd jobs and home repairs for people around town. “At first I did some handyman jobs. Then I worked for several guys in the area clearing land and working with heavy equipment. I also did a lot of cleanup work after hurricane Charley,” he said.

Those little jobs eventually added up, and Justin started a business called Grande Tarpon Home Services, a well-known name on the island for almost two decades. His work includes general home repairs such as electrical, plumbing, carpentry and drywall. He has also been a licensed home inspector for the past two years. “It just made sense, because a lot of what I do includes real estate closing checklists. All my customers are word-of-mouth. I have never had to advertise, because I always have work.”

Justin said he rarely works off island and will usually only do so if his current clients request it. Justin is very proud of his most recent exciting adventure: capturing first place at the 2016 World’s Richest Tarpon Tournament. “We had four fish that first day (May 19), and we were winning – but I knew anything could happen after that. So I told the guys to forget about yesterday and fish that second day like the first day didn’t happen,” he said. And that plan worked. The second day of the tournament, Justin caught the first fish, earning the team $9,800 for the first catch of the day. The luck continued as his team on Sundown, led by Capt. Timmy Smith, hooked another fish and also had the final catch of the evening, earning the team another $9,800. The team took first place overall for a total prize of $39,000 with seven releases. The winning captain, first mate and anglers all received sterling silver tournament rings from Barbara Anne’s Jewelry & Repair.

“It was a great competition toward the end. Good old Waylon Mills started pouring it on, catching fish after fish that second day. It kept things real exciting.” Justin said this was the first year he has participated as an angler in the World’s Richest Tarpon Tournament. He has been asked to judge tournaments in the past, but until now he had not fished in one. When some friends from St. Louis called and said they needed a fourth person this year, he agreed to join them. When asked about fishing in next year’s tournament, he said he believes when you take first place, it’s usually expected that you come back and defend your title, but he’s just enjoying the current win right now. When he is not working or coaching, Justin spends a lot of time reading books about football coaching. He also tries to go out fishing whenever he can.

Justin is not married. He is extremely proud of his “400 kids” he coaches in the Englewood Pop Warner Football program. A football fanatic since he was four years old, he played in junior high and high school and loves to watch football or read about it whenever he gets a chance. While he enjoys “island time” on his leisure days, it is not an option when it comes to running his business or running a successful football squad. He enforces “old school” rules when it comes to his players.

“If we have practice at 6 p.m., they’d better be on that field ready to play at 5:45 p.m. I love my kids, but they need to know when we’re out on that field it’s time to get serious.” Justin has been involved with Englewood Pop Warner for five years. He has coached kids in the league ranging from ages 8 through 12.

This past season, his Pop Warner Lions team won the conference championship and went on to the regional competition in Orlando. “We lost, but we did good. They played hard,” he said. The coach reminded the kids to be proud of the successful year they had by giving them a positive talk after the loss, asking them to recall how they lost the first game of the season and then went undefeated after that.

“It’s all in your head. You have to believe you can do it and never give up. Once somebody puts that positive attitude in your head, it’s going to show – and I believe that’s true for every situation in life. Anything can change in a heartbeat.” He has also served on the Pop Warner board of directors in the past. He likes to follow his players as they rise through the ranks and can often be spotted in the bleachers at Lemon Bay High School football games. “I don’t go to get recognized, but it’s nice when some of the kids do see me, and then they’ll text me after the game to talk about how they played.” Justin’s favorite author is western novelist Louis L’Amour. “I’ve been reading his books since I was a kid. I have his whole collection. I got it from my grandfather and my father, so it’s kind of a family thing.”

His dad still lives in Elkhart, Ind. and his mom currently lives in Tucson, Arizona. Justin has two brothers and a sister. His older brother Don lives in North Carolina; his sister Angela lives in Elkhart just down the street from his dad. His younger brother Nate lives here in Boca Grande.

Nate moved here five years ago and is currently the manager at Island Bike ‘n Beach on Park Avenue. Justin said he loves living and working on the island and does not plan to ever leave it. “The first four years I lived here, I didn’t even have a car – I didn’t want one and I didn’t need one,” he said. He said if he needed anything from a store off the island, he’d arrange a road trip with some friends and make a day out of it, stopping for lunch or dinner at area restaurants. The people he admires most in life are his great grandparents, who were farmers in Michigan and were married “forever.”

“I spent a lot of time on the farm working, playing and just spending time with them. They had a lot of influence one me as a kid. Just watching how they would interact with each other and how genuine and playful they were with each other – you always felt love in that house, comfort, safety and security.” The road they lived on, Trout Road, was named after his great-grandparents. His family still owns the land today.