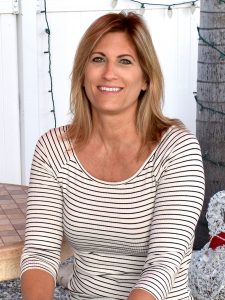 Julie Camp learned how to run a successful business at the young age of 21. Her father, Ken Heimann, Sr., bought the Pink Pony building on Park Avenue in Boca Grande in the early 1980s. The retired Chicago police officer wanted a change when he retired, so after doing some exploring around Southwest Florida, he decided to purchase a home at the south end of the island. Julie was 11 years old at the time.

“I was very shell-shocked. Coming from a big city, there weren’t many kids here my age,” Julie said. “It was very different to leave a big city and move to an island in Florida. But I liked it … I adjusted.”

Julie attended A/G Christian Academy in Englewood before moving on to Lemon Bay High School, where she played basketball, volleyball and tennis.

“I kept busy,” she said. “There were many late games, and having to get a ride back to the island made for some very late nights.”

She moved to Oxford, Mississippi after graduating from high school, and she attended the University of Mississippi for a year. But that really wasn’t the right place for her at the time, and she moved back to Boca Grande when she was 19. After working several different jobs, she went back to school and became a certified nursing assistant. But again, she quickly realized that it wasn’t the career path she wanted to pursue.

Her father had started a security business and had clients both on and off the island. When he announced that he wanted to open an ice cream shop in Boca Grande, Julie jumped on board to help him run the business.

“We started out very small,” Julie said. “We were open every day, and I think we had eight basic flavors.”

Year after year the store continued to grow. More than 30 years later, Julie co-owns the establishment with her brother, Ken Heimann, Jr.

During the 1990s, they decided to add video rentals at the little ice cream shop and expanded into a larger building. Soon they added a kitchen and started serving hot breakfast and lunches.

“We try to cater to the workers on the island as far as our food is concerned,” Julie said. “We serve affordable food and try to get it out as fast as possible.”

She recalls there was a massive amount of construction on the island during the 1990s, and most of the customers were skilled trade workers.

Today, she said the regular customers are more of a mix, and include seasonal residents, vacationers and employees who work on the island.

Business can get pretty intense during season, with customers sometimes lining up out the door and around the corner of the building. When possible, she will hire an extra employee to help.

“Normally we just pick up the pace and get through it,” she said. “Everybody works hard. I am very fortunate and blessed that I have such good employees. Sally (Libonati) has been with me for 20 years, and she knows just about everything there is to know about this place.”

There are two people who work part time at the store, and four full-time employees, including Julie and her brother.

She said the island was very different 30 years ago. There were more small cottages, and almost everybody knew everyone who lived here.

Julie met her husband, Jeff, while they were both attending Lemon Bay High School. But at that time, they didn’t run with the same crowd, so they didn’t really knew each other very well. It wasn’t until a couple of years after graduating that they ran into each other at a party and began dating. They will be celebrating their 25th anniversary in February. Jeff is a contractor who specializes in building and framing homes.

“It’s very helpful to have a carpenter and a builder in the family,” Julie said. “He’s saved me on many occasions out here. He’s been a blessing in more ways than one.”

The Camps currently live in South Gulf Cove with their three dogs: Schultzie, Greta and Mini. Schultzie is a giant Schnauzer, Greta is a miniature Schnauzer, and Mini is a Shih Tzu. Julie said Mini is the oldest, and she’s the queen of the house. Schultzie was featured in a recent edition of Gasparilla Island Magazine in an article on dog training.

Julie had a brother, Lorn, who sadly passed away in a car accident on the island in 1993.

She has two nieces: Nikki and Taylor, and a nephew, Trey, who is a senior at Lemon Bay High School. Trey has helped out and worked at the Pink Pony over the summer months. Look for the tall young man in the store on weekends and when school is out.

Julie is planning on going to visit her niece, Nikki, in Big Sky, Montana in the near future. Nikki formerly worked at Gasparilla Adventures on the island and now works as a naturalist at Lone Mountain Ranch. Nikki also wrote stories for the Boca Beacon in the past.

“I was worried about her making such a big move, but it’s seeming to agree with her,” Julie said. “It’s beautiful there, and I’m really looking forward to going to visit her and catching up.”

When she is not managing the business, Julie’s main hobby is traveling. Recently, she has visited Phoenix, Arizona, where she hiked to the top of Camelback Mountain.

A true adventurer, Julie goes on an international adventure each summer with her dad to visit new destinations. This past August, they explored Greece, Israel and Malta.

They plan to go to Cuba and Russia next year.

“My dad travels more than anyone I know, and we always plan a big trip every year,” she said. “It’s so great to go and explore new places and get to spend the time with him. He’s in really good shape. I guess I caught the travel bug from him.”

Dolphin Cove closes for a couple of weeks every August or September, so Julie plans her travels around that time.

“It’s a nice break to get away and not have to worry about anything,” she said. “And it’s a good break for my employees, too.”

The store owner said she makes sure every year to coordinate with Hudson’s Grocery so island folks don’t go hungry. She said she is curious to see how this season will be, due to the recent battle with red tide.

“Our summer numbers were definitely down from last year when comparing business sales,” she said. “Even the regular local customers weren’t coming in, because they didn’t want to go outside.”

She said the biggest challenge of running a business in Boca Grande is the peaks and low points of the year.

“It’s extremely drastic out here in the summer months, and you just have to plan ahead.”

Dolphin Cove/Pink Pony of Boca Grande is located at 471 Park Ave. The establishment serves breakfast, lunch, ice cream, fruit smoothies, coffee, beer and wine. Hours of operation are 7:30 a.m. to 4 p.m. and the establishment will stay open later during season.

Newer PostLocal ladies head to the gun range to learn, and to have a little fun
Older PostEnglewood naturalist says things are looking up