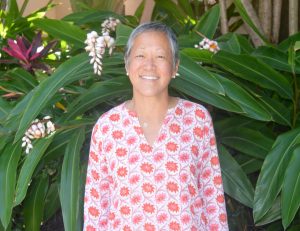 You might see her performing on stage in the Boca Grande Community Center auditorium, taking a painting class at the art alliance, singing in the choir at St. Andrew’s Episcopal Church or perhaps even tap dancing … you never know where you’ll find island resident Julia Pierce. This spirited soul never seems to slow down.

Julia earned her bachelor’s and master’s degrees in music education from Northwestern University, and she is classically trained in voice. After finishing school, she was offered a teaching position in Glenview, Illinois and taught music to children from kindergarten through sixth grade. Then she moved to Baltimore and worked at the Mid- Atlantic Arts Foundation.

“I wasn’t able to get a teaching position in Maryland, because my license wasn’t reciprocal in other states,” she said.

She started as an administrative assistant, and three months later she was director of public relations for the organization. Later she worked as a weekend coordinator for the Cloister’s Children’s Museum. It’s now called Baltimore Children’s Museum and is run by the City of Baltimore.

“At that time I think I knew every clown and magician in the area,” she said with a laugh. “And it brought me back to working with kids, which is what I really wanted to be doing.”

She later attended art school at Maryland Institute College of Art (MICA), taking classes in the evening. She studied graphic design, but she didn’t finish that degree because she was married at the time, and her (former) husband, who was attending medical school at Johns Hopkins, needed to relocate to do his residency at Dartmouth College in New Hampshire. But she did have a solid portfolio at the time and was able to market her work and start her own design company.

Julia played Florence in the recent Royal Palm Players rendition of “The Odd Couple.” “I never anticipated I’d be playing that role – it was so much fun,” she said.

Her mother and kids visited the island to see her perform on stage.

Julia met her husband Fred in New Hampshire. He owns a metal fabrication business, and Julia did some design work for his company. Fred still owns and runs the company, and Julia still does freelance design projects.

Julia had stage 2b, triple-negative, invasive ductal carcinoma (a type of breast cancer) a year ago.

“I discovered it upon self-examination,” she said. “It was dismissed by a poor physical exam and then confirmed by my annual mammogram. I am putting in a plug for annual visits and self-examination! I am also pushing self-advocacy: If you think something is wrong, stand up for yourself; remaining quiet could literally kill you.”

She said many people on the island have approached her and asked her how she is able to get up in front of an audience and perform.

“I tell them the story of how I had debilitating stage fright through college,” she said. “It wasn’t until after experiencing the unconditional love of my children that I could sing in public. It isn’t that I don’t care what people think, but more, if they don’t like my voice or performance, it will not change the way I love my family or my friends; it will not change what is important.”

She refers to this year as her “why not?” year. “My bout with cancer, or, as I like to call it, my year of living dangerously, had many silver linings,” she said. “One was learning to live in the moment. Which can mean different things: appreciating all my senses, not being a passive participant, doing what I love … I’m hoping this might inspire people to take some chances and try things they’ve always wanted to do, but were afraid of trying.” Amazingly energetic, it’s clear that Julia is feeling healthy these days. She keeps a very busy schedule full of activities that are available in Boca Grande.

She had never acted before accepting a part in “The Odd Couple.” Initially she auditioned for a musical role. Then she was asked to audition for the role of Florence, and it was a natural match.

“The people at RPP are very accommodating to anyone interested in theater who might not have much experience. Tad Ingram is an amazing director, and my fellow performers were so much fun to work with.”

Before this year, Julia and Fred would come to Boca Grande for a couple of weeks at a time throughout the year and then usually stay for March and April. This year they came down in December, and Julia is staying through April. Fred travels north for work constantly and comes back to the island as his work schedule allows.

When she is not working, Julia plays tennis at The Gasparilla Inn courts. She’s been taking painting classes and actually had two pieces in the student/member art show this past weekend at the art center. And staying true to her educational background, she’s on the music committee and sings with St. Andrew’s Episcopal choir. Tap dancing is another new hobby. Julia and Fred belong to a local yacht club and they enjoy going out boating with their friends.

She also keeps a blog at carepages.com.

“It’s kind of a vehicle for people to update family and friends on your personal health matters,” she said. “When I was going through my treatments, I would post updates and musings, and it turned out to be a very nice outlet.”

Julia has a dog, Robbie, a four-year-old English Shepherd. Robbie played an important role during her treatments.

“He actually was a life-saver,” she said. “He was so good for me; we’d go out walking every day. I call him my therapy dog.”

Julia is involved in the Grande Glee singing club, and she’ll be singing in an upcoming soiree at the Crowninshield House at 5 p.m. on Tuesday, April 18. Call the Friends of Boca Grande for more information. Fred’s family has been coming to Boca Grande since the 1970s.

His mother is Je-Je Pierce.

“I think she has been the president of almost every organization on the island at one time or another – we call her the Major,” Julia said. “She is just a lovely person, and I really admire her very much.”

Julia’s parents have a place in Boca Bay South, and they spend most of their time in Chicago, where Julia grew up.

She was born in Evanston, Illinois and lived there until she left home to attend college. After earning her degrees, she worked for the Hopkins Center at Dartmouth College in the performing and visual arts facility. She was in charge of all the graphic design, including creating advertisements, logos and materials for other promotions.

“After having my third child, I started to do freelance work so I could be at home and care for them,” she said.

Julia has two sons and one daughter: Libbie, 25; Ian, 23 and Cameron, 21. Libbie is earning a master’s degree in human rights at Columbia University. Ian lives in Geneva, New York and plans to open a performing arts music venue and bar in the college town. Cameron is a junior at Colorado College and is studying philosophy. They all visit the island regularly.

“Ian and Libby came out for spring break and saw me in ‘The Odd Couple,’ and Cameron came to visit for Christmas,” Julia said.

Fred has a son, Ross, who lives in Jackson Hole, Wyoming. He is 26.

Julia and Fred spend the summer months in New London, New Hampshire. They plan to return to Boca Grande in October when Julia will undoubtedly become involved with a few more island organizations and activities to keep her schedule hopping.