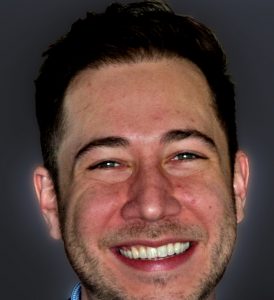 Originally from New York City, Josh’s parents moved to the Tampa Bay area, where he spent his formative years and completed high school. He earned his bachelor of fine arts degree at the University of Central Florida in performance.

Royal Palm Players Director Kate Ingram was actually one of Josh’s teachers at UCF. She taught at the school for 19 years.

“Of course I remember Josh,” she said, when asked about the former student. “He was a brilliant student, and we are very lucky to have his assistance directing a very interesting performance this season.”

Kate, wife of well-known RPP Director Tad Ingram, formally joined the organization when the couple made the decision to move to the area over the summer. Tad has been directing musicals in Boca Grande for about 10 years. Josh became affiliated with the Boca Grande theater group through Tad.

“Tad had taught part of an acting class for Kate when she was out of town, and we remained in touch,” Josh said. “I ran a theater company in New York for a number of years, and he was very supportive. He called me out of the blue one day and asked if I’d be interested in directing another performance in Boca Grande.”

It just happened to line up in his calendar when he had some availability to travel to Florida, so he gladly accepted.

Although he travels quite a bit for work, Josh presently lives in New York City and has directed a wide array of popular performances, including “My Fair Lady,” “Marie Antoinette,” “West Side Story,” “Romeo and Juliet” and “Guys & Dolls,” to name just a few. He will be coming to Boca Grande soon to direct the upcoming Royal Palm Players performance “Nunsense (The Mega Musical)” that is planned for March 10 through March 15, 2020.

Josh has already directed two shows for RPP, “My Fair Lady” and Cole Porter’s “Anything Goes” in 2019.

“They were both very beautiful, challenging shows, and I think the players did an amazing job,” Josh said. “The performances were very well received by the community. The audience was warm and welcoming, and what I found so interesting and surprising was how the actors were willing to be so vulnerable and really put the work in to make such an outstanding performance. The people of the Boca Grande community are amazing. It’s a safe place to fail – and I think they know that you cannot really succeed without a little bit of failure. It’s been an important part of my journey to help them understand that belief. That’s how you make great theater.”

“Nunsense” is a hilarious spoof about the misadventures of five nuns trying to manage a fundraiser. Sadly, the rest of the sisterhood dies from botulism after eating vichyssoise prepared by Sister Julia, Child of God. Thus the remaining nuns – Sister Leo, Sister Robert Anne, Sister Mary Amnesia, the Mother Superior Sister Regina and mistress of the novices Sister Mary Hubert – stage a talent show to raise the money to bury their dearly departed. Featuring tap dancing and comic surprises, this show has become an international phenomenon.

Josh has worked side by side with RPP Artistic Director Hal McCombs since 2016 on the Cape Cod Theatre Project in Falmouth, Massachusetts. Together, they collaborated on season selection and casting.

“The collaborative process is at the center of what I do,” Josh said. “I believe that through genuine collaboration a truer and more nuanced performance can be achieved. My mission is to shape the telling of stories that provoke thought and are accessible for audiences.”

Josh earned his master’s degree in fine arts from Brooklyn College in directing. He moved back to New York City when he was about 21, and his parents still live in the Clearwater area. They try to visit New York to see most of his performances, and Josh visits them as his busy schedule allows.

“They’re both retired now, which makes it a little easier,” he said. “My sister also lives in Florida, so I try to make it down at least a couple of times each year.”

Currently, Josh is the associate artistic theater director of the Cape Cod Theater Project, a nonprofit organization founded in 1995 by actors Andrew Polk and Jim Bracchitta, with the mission of collaborating with playwrights, actors, directors and the public in developing new American plays.

“We develop new plays for the American theater,” he said. “We’ve had a number of shows on Broadway, and a big portion of my years has been spent working with developing performances for the organization. We have a program (a writer residency program), so we develop a lot of new, really exciting pieces,” Josh said. ‘The goal is to go regional, but our focus and our mission is really to foster new work and talent.”

He’s also directed numerous projects in New York in 2019 and has several more planned for 2020.

“A lot of what I do is in musical development, so much of my time is spent in workshops preparing for new musicals and working with new playwrights.”

And he teaches acting and directing in New York on an undergraduate level at various universities.

He hasn’t held an acting role since he left college.

“I discovered in college that I was more interested in directing than acting,” he said. “The acting courses gave me a great base and a vehicle to communicate with actors. I think the best directors can speak to an actor and really convey a clear message.”

Josh will be staying in Boca Grande for about six weeks: five weeks for rehearsal and then a week of dress rehearsal.

“The grasp of what it takes to put together a show starts long before the rehearsals begin,” he said. “For the past few months, the scene directors and I have been speaking, talking about the set and working with the display volunteers. It really takes about a year to put a performance together. The characters first learn the music, then the parts and then the words. So by the time I get there, the cast is ready to read through the entire script.”

He said he is looking forward to returning to Boca Grande, adding that it will be quite enjoyable to be visiting Florida during February and March.

“It’s such a kind group of people,  and I am so grateful that I was invited back to work with this community. I really love this show – it’s so much fun and I’m so happy to be here. It’s quirky, skillfully written, and I think it’s a great fit for Boca Grande.”

The Royal Palm Players are celebrating 30 years of productions this year. Tickets are currently available for the March shows.