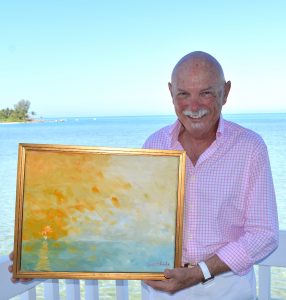 BY SUE IRWIN – Beautiful pieces of handcrafted art decorate the walls of John Mitchell’s home at the north end of the island. There are colorful images of the sea that he has painted with oils, and shell mirrors and lamps that light up the room.

But John is much more than an artist.

When John was a young boy, several family members tragically passed away at early ages, and he spent many days and hours in funeral homes. At that young age, he knew he wanted to be in the business of helping families deal with grief.

In 1965, he graduated from mortuary school in Milwaukee, Wisconsin, and five days later he married his wife Gloria. They met at a picnic through mutual friends, and they will be celebrating 54 years of marriage this year.

To start his career, John accepted a staff position at a funeral home in Lansing, Michigan. A few years later he ran a funeral home in Rochester, Michigan for five years. He discovered a funeral home for sale in Chelsea, Michigan in 1980 and decided to purchase it. John served as the funeral director, and Gloria did grief counseling for the families.

The establishment was named “Caskey-Mitchell.” John retained the name Caskey to respect the former owner.

In 1995 they purchased another funeral home in Stockbridge, Michigan and named it Staffan-Mitchell – again, to respect the prior owner.

In the process of buying and owning a funeral home, John and Gloria belonged to an international organization called National Selected Morticians, and he was elected secretary/treasurer of the organization and held that position for two years.

“I did something that very few people do, and I always felt very gratified that I was able to help people get through a very tough time.”

John said it was interesting to work with people of all different faiths.

“It was a very rewarding career,” he said. “It was very emotional work. We helped some of our best friends get through very difficult days.”

John served on the first board of directors for the Southeast Michigan Hospice organization.

“Hospice wasn’t a very accepted service in the 1970s, and I’m proud to have been a part of that organization.”

He earned a 53-year recognition award from the Michigan Funeral Directors for being a licensed director for five decades.

John and Gloria have three grown children: John, Michael and Amy. They have six grandsons and two granddaughters, who are all very active and love to visit Boca Grande.

“We all have homes in Chelsea, Michigan, so we get to spend the summers together,” John said. “And they’re all visiting us here this winter … we’re very lucky,” Gloria added.

Their sons bought both funeral homes from their parents five years ago and run the businesses with their wives, Cindy and Stacey.

“They all work very closely together … they make a very good team,” John said.

The former funeral director might just be a descendant of the first child born in North America to English parents.

The Plymouth Plantation gave a presentation in Boca Grande two years ago, and John and Gloria attended the event. “We spoke with the man who gave the presentation, and I told him I was trying to prove that I was related to Peregrine White, who was the first European Caucasian born in the New World,” John said. “They recently called me and said they were going to be in Boca Grande. We met and talked about the Plymouth Plantation projects … but they also gave me some valuable information and contact persons who could help me trace my roots.”

Next year will be the 400th anniversary of the Mayflower landing, and John plans to attend the big ceremony up north.

John and Gloria have been spending winters in Boca Grande for the past 21 years.

Years ago, they were vacationing in Ft. Myers Beach and never thought a place like Boca Grande existed. Then they stayed with friends on Sanibel Island, and then Captiva, and eventually were introduced to Boca Grande.

“We rented here for one year and bought a home that same winter,” John said. “We realized immediately that Boca Grande is a pretty special place. Everybody is so friendly, it’s just a wonderful place to be.”

“We go to old-car festivals up north every summer, and we are part of an automobile camping display at a car festival at Greenfield Village in Dearborn, Michigan,” he said. “We set up a 1914 fishing camp, and everything in it is authenticated. We dress in period costumes. It’s a lot of fun.”

John has a true passion for art. He is a member of the Oil Painters of America, and he has served as president of the Boca Grande Art Alliance.

“Even as a child in elementary school, I’ve always had an artistic flair,” he said. “My art teachers were very encouraging. I have a very creative imagination.”

He is going to be featured in the “Art in Bloom 2019,” spring art show scheduled today through Sunday, March 24 at the Boca Grande Art Center. The exhibit is open from 10 a.m. to 5 p.m. today and tomorrow, and from 10 a.m. to 4 p.m. on Sunday. The show will feature art by exhibiting members and floral interpretations by Boca Grande Garden Club designers. The Art Center is located at 236 Banyan Street, next to the Crowninshield House.

John used to be involved in the coordination of the shows and the arrangement of the artists, but after five years of coordinating, he passed that responsibility along. This year he will be showing five oil paintings as well as some of his shell art.

“I’m always amazed at the what the floral designers come up with each year to complement the art,” he said. “The interpretations of my work have been wonderful.”

John said he tries to make unique pieces of art, and he is often inspired by just looking out at the water while he is having coffee in the morning. One piece of art he created is a map of Boca Grande in 1905, using the wood from an old ironing board.

John and Gloria are very involved with the Boca Grande Lighthouse United Methodist Church. They both sing in the church choir, and you can find them working hard in the kitchen at the Thursday morning pancake breakfasts during season. John is the egg cracker. He cracked 640 eggs at the first breakfast this season. Gloria helps run the kitchen. The breakfasts take place from 8 a.m. to 10 a.m. every Thursday through April 18. They serve all you care to eat. A free-will offering is suggested to help with church mission efforts. The Boca Grande United Methodist Church is located at 325 3rd St. W. in Boca Grande.