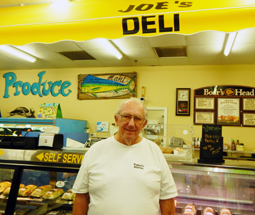 If you’ve enjoyed a delicious sandwich made on fresh- baked bread at Kappy’s Market recently, chances are it was made and served to you by Joe Stansbury.

The friendly face behind the deli counter has been working four days per week at Kappy’s for the past 20 years. His wife, Phyllis, has worked there for 15.

Joe and Phyllis ran “Harry’s Diner” in Baltimore, Maryland for about seven years. A friend of his had bought it and a few years later, he wanted to sell it. Phyllis was already working at the diner at the time, so they decided to buy it. Joe said he didn’t want to change the name of the diner, since it already had a good reputation.

“If it worked for him, I figured it would work just as good for me – and it did. After 40 years, everybody in town seemed to know Harry’s Diner,” Joe said.

The diner was located right across the street from Johns Hopkins Hospital. “It was a good business. We were open from 6 a.m. to 6 p.m. and we had about six employees plus Phyllis and myself.” Joe said they would arrive at the deli at 6 a.m. to slice the meats, and then he would head over to his day job at SK Meat Packing Plant and then come back to the market in the afternoon. “We sold an average of 1,000 sandwiches every day. We’d have a line from 7 a.m. until closing time,” Joe said.

The area was filled with working-class people. Joe recalls that the diner offered an American coldcut sandwich special 25 years ago that sold for $1.05. And no matter what happened, if prices went up on meats or cheese, he kept the same price on that sandwich to feed the local workers every day. It was a 6-inch sandwich with ham, salami, bologna and cheese. He contracted with a local baker who would prepare and deliver the bread three times a day.

“To make a good sandwich you need fresh rolls – you don’t want it served on a roll that’s been sitting around for three days,” he said. And that’s exactly the same philosophy he keeps at Kappy’s Market and Deli.

After moving here, Joe was reading the paper one morning and noticed there was an advertisement for deli help. He was planning on stopping in for coffee anyway, so he inquired about the job. Two days later, he was working in the store.

“I didn’t think they would hire me. I figured they wanted someone young … and I was old,” he said. When he first started at Kappy’s he worked two days a week. Now he works four and says that keeps him plenty busy.

“We came down here thinking we were going to retire – but we’ve really enjoyed our years here, and God willing, we hope to be here for another 20.” Joe arrives at 8 a.m. and pulls the dough from the walk-in cooler and begins his daily routine of preparing fresh bread for the sandwiches. “Several of the doctors we see living down here on the island now were customers of ours back in Maryland,” Joe said. “I mentioned the place to a few of them and they remember getting lunch there,” Joe said.

About a year ago, Joe had to take sick leave to tend to a medical condition. When he came back to work, he noticed a new, bright yellow sign hanging over the deli counter that said “Joe’s Deli.” Joe does much of the ordering for the deli at Kappy’s, and Phyllis makes the salads and sandwiches.

“Everything is made fresh here every day, and we only use Boar’s Head meats,” Joe said. Joe said the Italian subs, blackened turkey and roast beef sandwiches are the most popular lunch items at Kappy’s. They also make deli and vegetable trays and accept special requests. “You tell us what you want and we’ll make it. That’s how we did it in our business. We give the people what they want.”

When he is not working, Joe and Phyllis enjoy doing sea turtle patrol. He used to enjoy fishing and boating, but he hasn’t been able to do that much these days due to pain in his knees. Joe remembers one of his first jobs, working on a shrimp boat in Biloxi, Miss. “It was something I’d always wanted to do … and let me tell you, that is hard work.

We worked all night for seven days straight until that boat was full of shrimp.” Back in Maryland, Joe was a shop steward and was in charge of 1,600 people at the meat plant. He worked there for more than 30 years. He also served as vice president of the union there for 15 years.

After seven years of owning and running Harry’s Diner, they decided it was time to sell the place and enjoy retirement. Joe and Phyllis had friends who lived in Port Charlotte, and one year they came down to visit them. They loved the area and decided to look for property here.

Phyllis was ready to move to Florida, but Joe didn’t want to be a snowbird and felt if they were going to make a move, it should be permanent. They searched for homes for nearly four years. One day they drove by a house in Gulf Cove that had a ‘for sale’ sign in the front. “We knocked on the door but no one answered. We walked around to the back of the house, and the owners were sitting outside. We talked, made a deal and shook hands, and that was that,” Joe said.

Joe and Phyllis have five children and five grandchildren. Two grandchildren (adults) currently live with them in Gulf Cove. They both work as nurses at Fawcett Hospital. “They love it here. They brought their little dog with them.”

Joe and Phyllis have a chocolate lab named Rufus. He was rescue dog from Englewood. “Rufus was never a barker in the past, but now that the little dog is living under the same roof, it’s getting louder and louder in the home. But the dogs get along well.”

A lot of the customers at Kappy’s know Rufus, because the Stanburys have brought him in several times. “He’s a very good dog. He just sits behind the counter up at the front of the store and watches the people come in and out.”

The Stanburys also have a condo in Orlando. Phyllis enjoys staying there and going to Walt Disney World when the grandkids come down for vacation. “

We always have somebody coming down to visit, which is nice, because I don’t like going back up north. I definitely won’t go up there in the winter time.”Joe said.