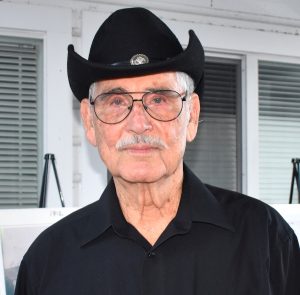 After living in Boca Grande for decades, working at the phosphate docks and raising a family here, Joe Freeman recently came back to visit the island to attend the opening celebration of the current exhibit at the Boca Grande Historical Society’s History Center. The Historical Society held a special sneak preview for members to view its most recent exhibition, “Railroads, Phosphate and Real Estate,” on the island in November.

Joe traveled from his hometown of Tampa to attend the event and speak with guests about his years of experience working as manager at the Port Boca Grande phosphate facility, which was formerly located at the south end of the island. As a young man, he would drive to Placida and let folks know ahead of time when he planned to arrive, and a boat would be there to pick him up at the estimated time to take him to his work destination.

Joe said it was difficult to keep cool here in the summer without air conditioning, and the mosquitoes were just awful. He recalls there was a fishing village that existed at the north end of the island, and nothing else.

“There were no buildings, nothing,” he said. “If you looked toward the west into the Gulf, there was nothing there. Just Mother Nature. Trees, bushes, shrubs and water … all the way to Journey’s End … there was nothing between there and the village of Boca Grande. It wasn’t much different from when the Spaniards arrived in the 1600s; the same way they found it. Nothing but nature.”

Joe lived in Boca Grande from 1951 to 1979, at which time he was transferred to a port in Tampa. He returned to the island a few years later and worked at the phosphate docks until 1984.

After moving here with his family, he built a home on Bailey Street.

Joe did his fair share of tarpon fishing while living on the island, and in fact, he currently has a tarpon mounted in his computer room at his home in Tampa.

“I went out with Johns Knight and had a lucky catch one evening. He was a great guy. He owned the boatyard on the island. It was quite a piece of property.”

Joe is a native Floridian, born and raised in Polk County in a small mining town.

His father worked for the American Agricultural Chemical Company, which was the corporation that built the railroad from Tampa to Boca Grande.

Joe joined the military when he was 17 years old and served in the Air Force overseas in Tachikawa, Japan, just outside Tokyo.

“It was not that romantic … I worked at a supply base, but I got to see a good part of the country, and it was very interesting.”

When he first arrived in Japan, he was placed on guard duty at the age of 17. “The first night they put me at a little annex right off the base – and I have to be honest, it was a bit frightening to be out there by myself at 4:00 in the morning. I watched the Jeep drive off, and it was just me working that post in the dark.”

When departing the United States, the military recruits sailed out of Staten Island, New York, and went through the Panama Canal and stopped in Panama for a day to do some sightseeing. “It was a really interesting trip. We sailed to Hawaii and went on to Yokohama, where we were driven to our base.”

Joe’s battalion took the train into Tokyo, where there was a large base with a movie theater and stage shows. “It was pretty nice place … we had fun. Coming home, I could see the Golden Gate Bridge in San Francisco, which was quite a thrill. It was so beautiful to see all of that at such a young age.”

After the military, Joe attended business school at the University of Tampa and took advantage of the GI Bill of Rights.

He returned home to Florida in 1951 and married Nancy Jewel when he was 19. They had two boys, Joey and Tommy, who both grew up in Boca Grande.

“As boys, the island was the only place they knew,” Joe said.

After attending college, Joe worked for a steamship agency in Tampa.

“They sent me to Port Boca Grande to represent the company and discuss contracts with the port authority,” Joe said. “I took the train down to Boca in the morning with my paperwork and took the vessel to the island, and when a job opened up for a stenographer they asked me if I was interested.”

So he went to the regional railroad office in Tampa and submitted an application, and he was offered the position after a few weeks.

Joe happily accepted, since the job paid more than he was making at the time.

He had a flourishing career in Boca Grande until he eventually retired in 1988.

A high-ranking employee claimed Joe’s job as a stenographer after the employee learned his position as assistant agent was going to be eliminated.

“It was seniority based, so you could claim another job if yours was removed – as long as you had the seniority and qualifications.”

When that happened, Joe went to work at Mulberry Yards, a railroad yard in Tampa, for about a year. That facilty was where most of the phosphate in Florida was transported from at the time.

“That’s when they started putting all the train rails together to transport the phosphate,” he recalled.

He made another bid for a job and returned to Boca Grande less than a year after leaving Gasparilla Island. This time he was doing the duties of a clerk for the organization.

“When the port agent retired, they promoted me to take his job – so I went all the way from the bottom to the top.”

He was then transferred to a port in Tampa, where he worked in management until he retired in 1988.

When Joe moved back to Tampa, his youngest son was in college and the oldest was married.

“Tommy was attending the University of South Florida, and Joey stayed in the Englewood area and started a painting business. He still lives there today.”

Last September, the Boca Grande Historical Society reached out to Joe and asked if he would come and give a talk about the new exhibit at the History Center. His youngest son Tommy performed live music at the opening event.

Being the kind, Southern gentleman that he is, Joe took the time to talk individually with each guest at the event who had questions or wanted  more details about what it was like to live, work and raise a family in Boca Grande before it became so popular.

When asked what Boca Grande was like during his years here, Joe said it was “dramatically different” compared to now.

“There was no bridge. In fact, at that time the railroad produced the electric cars that were used on the island. We had three large generators at the powerhouse on the south end, and the only thing left there now is the old power plant.”

He said the population on the island back then was no more than 400 people. In wintertime it increased a good amount. More tourists were coming to The Gasparilla Inn & Club and more people were buying winter homes.

Several years ago, Joe gave a talk on the island at the Johann Fust Community Library as part of the Boca Grande Historical Society’s annual “History Bytes” events.

“I spoke about the railroad and the phosphate plant and how everything operated back then. The people seemed to enjoy the information and learning about how things were on the island during that time.”

Joe has seven grandchildren, and a couple of the boys still work in Boca Grande. His grandson Josh worked at PJs Seagrille for many years until it closed last June. One grandson also owns a landscaping business and has many clients on the island.

The “Railroads, Phosphate and Real Estate” exhibit is currently available for viewing at the History Center, located at 170 Park Ave. in Boca Grande.