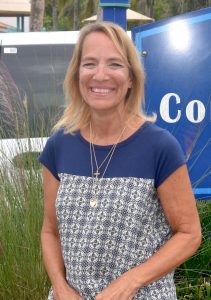 Many of the residents in Boca Grande could easily recognize Jodi Overman’s smiling face due the number of years she’s spent working on the island. Most recently, she accepted a position with the Friends of Boca Grande, the nonprofit organization that manages cultural and educational programs offered on the island. Jodi is an office assistant at the Community Center. She started working there part time about a year ago, and the position has since turned into a full-time job.

She had her first child when she was 24, and when she was 27, she and her then husband, Lee, bought a resort in northern Minnesota. They owned and operated Sleepy Hollow Resort together for 12 years.

“His brother owned the resort, and when he opened up a little bar and restaurant next door, it became too much to run both businesses, so we bought the resort from him,” Jodi said.

Her children, Tyler and Kailer, were age three and one respectively at the time, so they grew up spending a lot of time at the resort.

When they were in middle school, Jodi and Lee decided to sell the resort and move to Florida. The children attended L.A. Ainger Middle School and both graduated from Lemon Bay High School. They also both attended State College of Florida in Venice.

“And then they both moved back to Minnesota and earned their degrees up north,” Jodi said. “They like the seasons and the weather. My son went up there first, and she followed to be near her brother.”

“He travels a lot for work – he’s currently on a job near Tampa,” Jodi said. “He’s on a job site for about six months, and then he moves on to the next project.”

Kailer, 28, works for Evine Live home shopping network in Minneapolis. “She runs the cameras for the show,” Jodi said. “She was inspired by her television production teacher at Lemon Bay High School to pursue that as a career. That’s where she learned her love of cameras. They are both very down-to-earth kids, and I think that comes from being raised at the resort in Minnesota and spending summers in the Florida Keys. They both learned social skills very early, and they have very good work ethics.”

Both have friends in the area and come to visit their mom in the winters and for the holidays.

While they were running the resort, they’d stay open through deer season (late fall) and then work at a KOA campground in the Florida Keys for the winter months.

“So we were like gypsies for a few years,” she said with a laugh. When the kids reached middle school, the family realized it was important to be in one place. Having visited Southwest Florida several times, they looked at property from Naples to Venice and eventually chose to settle in Englewood.

“We liked the small-town feel, and it’s a great community,” she said. “And when we came out and visited Boca Grande, we just loved it – it reminded us of the Florida Keys.”

Having worked in tourism most of her life, Jodi found a job at Miller’s Marina and worked there for about a year. After that she worked for Parsley Baldwin Real Estate as a vacation rental specialist. Later she worked at Gasparilla Marina, just off island, for about five years. She worked in the ship store, the office and eventually as a boat dispatcher.

When the economy was getting rough, Jodi decided to go back to school and learn website design at the Charlotte Technical Center. She does the work from home in the evenings as a side job, and she has done many websites for business customers on the island, including Boca Grande Marina, Eagle Grille and Casuarina Charters, to name a few.

“I’m actually rebuilding the marina one for a third time, because after a while they need updates and a fresh look.”

While she was taking the web design classes, she took a job at Boca Grande Marina and managed the store for more than five years.

When asked what she likes the most about working in Boca Grande, she said driving over the bridge every morning and working with a great team.

“I love it here,” she said. “I love this island, and I love the people I work with, they’re all amazing – Marta, Debbie, Jessica, Kyle and D.J. Boca feels like home to me. I know many of the people who come into the Community Center, and I’ve met a lot of new people. I really enjoy my job and working the events.”

Jodi joined Executive Director Marta Howell and Program Director Debbie Frank a few weeks ago when they attended the Performing Arts Exchange in Orlando. It’s an annual booking, showcasing and professional development conference hosted in a different city each year.

“That’s our opportunity to go and scout for entertainment,” she said. “We get to see them perform and have a chance to decide what would be a good fit for Boca Grande.”

Jodi also gives credit to the many community members who connect key speakers and other performers to the island.

“It’s a group effort. Without help from the community, we wouldn’t have many of the amazing programs offered each year. And we love our volunteers. We couldn’t do everything we do without them.”

Jodi said the most recent Boca Grande Community Center Happenings program guide was a group effort this year, and the staff is proud of the product.

“We feel like it’s the best one we’ve ever done.”

When she is not working, Jodi enjoys doing yoga, riding her bicycle, kayaking and paddleboarding. She is also getting back into the game of golf.

Jodi has a large extended family up north. Her mom Shirley, the person she admires most in life, still lives in Illinois, and her three sisters and two brothers all live up north as well.

“My mother raised six kids all by herself, and we are all alive to tell about it,” Jodi said. “She comes down to thaw out every winter.”

In August Jodi went up to Dixon, Illinois for a family reunion. More than 48 family members attended.

“We call it the cousins reunion, since we are all spread out. We gather once a year and rent a big house and catch up with each other. Although my life has stretched me across the country, I still love to return to the Midwest as often as possible, to be with my family.”

Jodi said she tries to stay positive and wear a smile every day.

“I find that it makes other people want to smile as well, and that’s a good thing in this crazy world. Positive thoughts are required if you want to keep a smile on your face. I try hard to keep negative voices out of my head, whether it’s self-talk or the voices around me. Music is a powerful outside voice, uplifting tunes to keep me feeling happy.”

The next time you head over to the Boca Grande Community Center to pick up tickets for an upcoming event this season, say hello to Jodi, who will greet you with a smile when you enter the office.