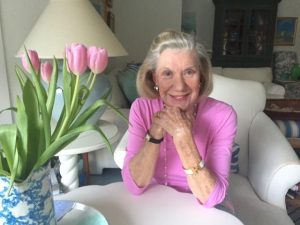 When JoAnn Barwick accepted a secretarial position at a public relations firm in New York City at the age of 22, she never would have guessed the serendipitous path that would eventually lead to a thrilling career.

She grew up in the Midwest in Rockford, Illinois and attended Wagner College, a private Lutheran liberal arts college in New York City.

“My parents thought I would be safe there, since it was a small private school,” she said. After a short time in college, she realized what she really needed was a skill set that would prepare her for a job in that exciting city.

So she went off to business/secretarial school, never having thought that being a secretary was a dream job, but clearly, especially in those days, it was the path to many opportunities. Her first jobs were with advertising agencies, and then by good luck she landed a job with a small public relations agency whose clients were interior designers and home furnishings companies.

She worked as an assistant/secretary to the vice president in charge of designers, Lillian Weiss, who turned out to be her major mentor. Lillian had graduated from Parson’s School of Design in Paris and saw in JoAnn potentials beyond secretarial help. The job was designing and setting up rooms for photography using clients’ furnishings. Suddenly there was a new, exciting focus for JoAnn.

Lillian began tutoring her in the elements of design, pointing out the best interiors from magazines and furniture store room settings during in-office lunches. After several years, she encouraged JoAnn to apply for a scholarship to Parson’s School of Design in New York City, which JoAnn received with great happiness, leading to a definite goal.

“But soon I realized I had to be able to write decent copy for the projects, so I took writing courses at Columbia University … not knowing that the combination of interior design and writing was a natural for a home magazine editor,” she said.

The public relations firm eventually went out of business, and she found her first magazine position at American Home as the assistant decorating editor under the editorship of one of the most revered editors of home magazines, John Mack Carter, who turned out to be her next important mentor.

“I learned so much because I was immediately asked to produce room settings and write copy,” she said.

After three years, Modern Bride asked her to be their decorating and tableware editor. While she loved her job at American Home, it was a big jump to be a department head and have the opportunity to fill many more pages. With the advice of Carter she took the job, noting his remark that “we would work together again in the future.”

Sure enough, 12 years later Carter was the editor-in-chief of Good Housekeeping, and he called to offer her the position of decorating & building editor there.

Meanwhile, major events were happening in JoAnn’s personal life, like getting married and having two children, John and Alison, in her words “the joys of my life.”

“It was very busy balancing home, office and travel, but very fulfilling,” she said. While at Good Housekeeping, she was designing and building a weekend ski house in Vermont and met a lot of people who were living a more simple life, less commercially oriented. JoAnn was very much influenced by what she saw and heard. It seemed that a grass-roots movement to a more countrified lifestyle was becoming popular.

At lunch one day with Carter, she asked if Hearst Magazines would be interested in a new magazine. When he said yes, she showed him an outline with the title “Country Living.” He liked the idea and asked her to do a presentation of what it would look like, so he could show it to the Hearst board team. She became so fascinated with the project that she created the table of contents and about 100 pages, which turned out to look very much like the first issue.

“I had so much fun doing the mockup,” she said. “In a way, it was like fantasizing a new lifestyle in creating a home.”

JoAnn received the go-ahead and as the founding editor in 1978 created the first issue, which featured Martha Stewart’s perfect country kitchen on the cover.

“We both lived in Westport, Connecticut, and I’d heard she had this great country kitchen, so I called her up. At that time she was doing catering in the area and just thinking about writing a book.” JoAnn took her staff to photograph Martha’s kitchen and designed it as a Thanksgiving dinner where her family – and some of JoAnn’s as well – were pictured sharing a holiday dinner.

It flew off the newsstands and was hailed as an immediate success. After a few more issues, Hearst Magazine’s president told JoAnn the company needed her at their major magazine: House Beautiful. So with mixed emotions – a desire to remain faithful to the magazine she founded and another to accept a professional promotion and challenge – she decided to accept the position as editor-in-chief of House Beautiful magazine in 1978.

“I inherited a very good staff, and all of a sudden I was in charge of supervising a lot of people. I was never actually trained in management or running a company and being responsible for the bottom line.” But she quickly realized she loved her new position. JoAnn described the experience as like going to the best university and getting paid for it.

She was travelling all around the world and meeting new designers along the way.

“People were very eager to educate me. They wanted to show me their new fabrics and get my opinion on their new furniture, and I was really keeping up with all the new fashion trends,” she said. “Sure, it was hard, and I often stayed up late working, but I loved it and I felt very lucky.”

Incidentally, one of the first hires at House Beautiful was Martha Stewart as the food and entertaining editor. They worked together for many years.

Not only was she given the chance to visit the most beautiful homes in the country but also to meet the owners and have lunch with them and get to know them well. She also enjoyed visiting France and Scandinavia and found a deep admiration for the country styles of Europe, which were featured along with American country styles, also very popular at the time. She particularly enjoyed visiting Scandinavia and is quite fond of Swedish design, so much so that she was inspired to author a book about 18th century Swedish houses and design.

“The simplicity of their lifestyle is reflected in their furniture, and some of the older pieces were actually modeled after Louis XVI.”

In 1991 she published her book, “Scandinavian Country.” The book is available on Amazon.

At that time, JoAnn wanted to retire and spend more time with her children and young grandchildren. And almost immediately, Lexington Furniture called and asked if she had any ideas about creating a new furniture collection. So she took a position as an executive design consultant with Lexington. She told the company she wanted to create a sort of weekend getaway type of furniture that one might commonly see in weekend homes from Maine to Key West. It would reflect warm pastel colors and a deceptively simple design.

“I wanted it to be the kind of furniture you’d enjoy while creating family vacation memories,” she said. “Something you might find in a high-end second-hand store or an antique shop.” She created two collections in 1994 for Lexington Furniture, called the “Weekend Retreat” and “Seaside Retreat.”

Many of the pieces can be seen in her Boca Grande home and she knows of at least 35 homes in Boca Grande that currently are decorated with those two collections.

She regularly receives calls from island residents requesting her help in decorating their homes. Many new homeowners on the island are looking to create a beach theme and consult JoAnn as an interior designer.

JoAnn and her husband Fred Berger had been vacationing along the west coast of Florida for several years, and one Sunday in 1993, they decided to visit friends and discovered Boca Grande.

“Once I saw that aqua water and we drove across that bridge I knew I wanted to have a home in this adorable town,” she said. “It was a Sunday, so all the real estate offices were closed except for Boca Bay. We stopped in and looked at the available properties and put money down on land that same day.”

At that time, there were five different model plans available and JoAnn worked with builders to re-do the plans and construct a home particularly to her taste. She knew she wanted to be able to showcase some of her original designs and wanted to build something that would compliment those kinds of styles.

From 1991 through 1994, JoAnne was a design consultant and media spokesperson for the Masco Home Furnishing Group, who companies include Henredon, Drexel Heritage and Lexington. A four time winner of the Dorothy Dawe Award for outstanding home furnishings work, JoAnne has received other major industry awards including the International Furnishings and Design Association’s National Honorary Recognition Award, the Southern Furniture Market Exposition Writer’s Hall of Fame Award, the Dallas market Center Award and the Burlington House Award.

Her beautiful island home was featured in Traditional Home magazine in 2009.

In her spare time, JoAnne enjoys playing tennis and oil painting. Several beautiful pieces of art are displayed throughout her home. Some of which were inspired from photos taken in Martha’s Vineyard and others from inspirations here in Boca Grande. She’s been taking classes at the art center for the past five years.

While she was working at House Beautiful, she would take vacation time in the summer. Her granddaughters and grandnieces were growing up, and JoAnn would host an annual “summer camp” at her Connecticut home. The children learned how to cook, navigate a canoe and camp overnight. They slept in 150-year-old barn that was outfitted entirely in JoAnn’s Weekend Retreat collection for Lexington Furniture Industries. The barn’s sleeping porch was the central hangout for the campers.

“We invited our neighbors and friends to do special activities with them. For instance, one was a pottery worker so they learned how to make facemasks. And my son took them on an overnight fishing, canoeing and camping trip where they spent the night outdoors in the rain. They had such a good time.”

The girls were also the sous chefs for my husband Fred who was an excellent cook. And on the final night, they would put on a theatrical performance where they danced and sang.

“The best part was I had the chance to talk with each of them and get to know all about their lives.”

JoAnn enjoys travelling with family and friends and is looking forward to spending some time in her Vermont home this summer and taking a trip to Hawaii this coming fall.