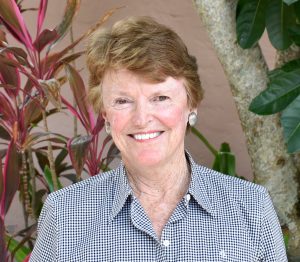 Zestful and energetic, Joan Ardrey once took an aptitude test that suggested she would make a good reporter, but she didn’t like the idea of being in the face of people who were dealing with high-pressure situations. So when she graduated from high school in Stamford, Connecticut and moved to Massachusetts to attend Mount Holyoke College, she decided to study romance languages and French and Italian literature.

“I have always loved reading and writing, so studying language was very natural for me,” Joan said.

Joan met her husband, Jim, at the old Lake Placid Club, at the heart of the Adirondacks in New York. Jim was from Texas and was visiting for the summer with his family.

They began dating and were married six years later. The happy couple is celebrating 51 years of marriage this year.

For many years, they lived in Greenwich, Connecticut, and raised their two sons, Jim and Guy, during that time.

Both are married now and each have two kids, so Joan and Jim are proud grandparents of four grandchildren – all of whom love to come and visit Boca Grande.

When Joan earned her bachelor’s degree, the National Security Agency visited her school. They were recruiting language majors who might be interested in working in Washington D.C., breaking Japanese codes. Accepting the venture, she went to Washington, took all the tests and passed. She met with a member of the FBI and agreed to a job after a security clearance. The clearance took longer than Joan anticipated, so she took a job as a legal secretary to make money. In the interim, her roommate was working at the NSA, and she said the job was very boring and the environment very beaurocratic.

“So I dodged a bullet and refused the job – I probably would have hated it.”

Joan returned to New York and found a job as a secretary at Time-Life. She said it was fun, but it was a very menial job in the merchandising department, and she was bored. One day on lunch break, she went to the personnel office and asked if there were any more-challenging positions available. The woman running the office said there was a position open working for the chairman of the board. Joan accepted the job and said it was the most fun she’d ever had.

“It was the mid 1960s, and we were in charge of coordinating all the parties. I’ll never forget the party we hosted at the Metropolitan Museum of Art for the King and Queen of Thailand.”

She held that position until she had her first son.

Years later when both boys were in school, Joan found herself with too much time on her hands, so she enrolled in a master’s degree program and studied French and Italian at New York University.

“Academically I did very well, because I really appreciated what a privilege it was to have the opportunity to study at my own leisure.”

Jim’s job took the family to Texas for about three years, but they eventually moved back to Connecticut.

Joan took a temporary job in Stamford at a small venture capital firm. The woman she was filling in for never returned, so she was given the permanent position.

Joan and Jim spend the summers at their home in Connecticut and winters in Boca Grande. “We love it here,” she said. “There are so many fun, interesting people, and there is so much to do. The talent on this island is unbelievable. It’s such a great place, we feel very fortunate to be here.”

When Joan was serving on the Boca Grande Arts Alliance board, she decided to take a few of the workshops offered and dabble in art.

“I took a watercolor workshop and did a couple of pieces, and I think I just got lucky because they came out pretty nice,” she said with a laugh. “And it was interesting to meet all the great artists on the island.”

Joan is the publicity coordinator for the Boca Grande Literature Forum. The steering committee for the forum is a group of people who meet once month from November to April to discuss their ideas about preselected books to read each month. Its mission is to encourage the reading and discussion of outstanding, enduring literature.

“And that’s the hard question – what is outstanding literature?” she said. “There are many well-written books that are good to read, but do they meet the standards of great literature? If we choose something too stuffy, no one will want to read it. So it’s finding that balance in deciding what could be considered classic in a way, yet read-able.”

Joan said as many as 40 people have come to the Boca Grande Community Center Houghton Room to hear the discussions about the books. And you don’t even have to read the book to attend; some people go just to listen to the discussion. Everyone is invited. The group will discuss “Gilead” by Marilynn Robinson at the February 7 event. Winner of the 2005 Pulitzer Prize for fiction, “Gilead” is an intimate tale of three generations from the Civil War to the 20th century. Forum member Charles Starke will lead the discussion. The group meets at 2 p.m.

“Most of the time, it’s a very good discussion and it’s a lot of fun,” Joan said. “You can get something out of it, even if you haven’t read the book.”

Staff at the Johann Fust Community Library keep a copy of the selected books at the library so residents can check them out.

Speaking of books, Joan self-published one in 2013 called “A.C. – The Remarkable Life of Alexander Calhoun Ardrey.”

The book is about Jim’s great grandfather and his experience of fighting in the Civil War. A.C. found himself at Fort Adams, Mississippi, where the steamboat on which he had been working was docked. He enlisted in Company E, 21st Regiment Mississippi Infantry and never looked back.

“I became fascinated with researching and learning about the battles he fought, and how many he was able to survive,” Joan said.

The experience of publishing her own book via CreateSpace Independent Publishing Platform was a great experience for Joan, and she encourages anybody who has a story to share to publish it so it’s preserved.

“It’s all done online now, and they make it very easy … they even put it on Amazon for you.”

In 2014 she published a second book, “Celtic Courage: A Condensed History of Irish Rebellion, Resistance and Resilience,” a book about her Irish history. The book is unique in weaving her family history into the larger narrative, documenting the role that the Synnotts of Wexford played in Irish history.

The books are available to purchase online, or you can also check them out at the Johann Fust Community Library.

This year, literature forum members teamed up with the Royal Palm Players to do a staged reading at the Community Center.

“That was something they used to do years ago before my time, and then a few years ago they decided to do it again,” Joan said. “So this year, we did five books and a reading.”

Joan and Jim discovered Boca Grande through their younger son, Guy. He was dating a girl, Sarah (now his wife of 15 years), and her family regularly stayed at The Gasparilla Inn. When the relationship became serious, they invited Guy to come and stay with them at The Inn for the holidays. Guy was so impressed with the island that he suggested to his parents it would be well worth their time to visit.

“We came down with some friends and of course immediately fell in love with the place while driving over the causeway,” Joan said. “We had lunch at the Loose Caboose, and Jim was talking to a Realtor as soon as we finished.” They ended up buying a place in Boca Bay.

Joan and her husband are active tennis players at the Boca Grande Pass Club. Although they are not regular boaters, they do plan a trip every May to go tarpon fishing with Capt. Dumplin’ Wheeler.

“He’s such a character and he’s so much fun,” Joan said. “We go out for the evening drift. It’s so pretty being on the water under the moonlight.”

Music is another hobby Joan greatly enjoys. She started out singing up north in a women’s a cappella group.

“It started out as a music therapy group,” Joan said. “We sang for old folks in senior living communities, and it was lot of fun. It was a wonderful group. I did that the for many years.”

Now she is in the choir at St. Andrew’s church, and she’s also been involved with Grande Glee for several years.

Along the way she became involved with the Royal Palm Players, and she’ll be a part of a small performance in April led by Reyn Guyer. Along with collaborator Jeff Harrington, a small group will sing songs and share

stories. RPP’s Kids Drama Club will join the fun for a couple of numbers. Two shows are planned at 7:30 p.m. on April 12 and April 13. To purchase tickets, visit royalpalmplayers.com.