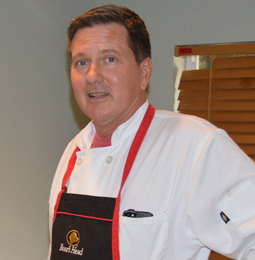 Chef Jim Morrow has been keeping busy adding flavorful new lunch and dinner items to the menu at Hudson’s Grocery since early March, 2016. With years of experience working as a chef, owning his own restaurant and dealing with food distribution and sales, Jim bring vast experience to the island grocery.

Jim grew up in Rochester, New York and attended the Culinary Institute of America. His family vacationed regularly in Southwest Florida, and he knew he always wanted to live in this area.

So after graduating and completing an externship at a restaurant, he relocated to Ft. Myers to work at Anthony’s restaurant (which is no longer in business).

Jim met his wife, Andrea, while working in Ft. Myers 32 years ago. Andrea is from Jim’s hometown in Rochester, but the two of them had never met until they lived in Ft. Myers. Jim was working at a restaurant on Sanibel Island and living with a roommate in Ft. Myers when he and Andrea were first introduced. “We grew up two blocks away from each other. I knew her sisters, and my father knew her father, but we had never met. So, I believe it was fate,” Jim said.

They were married a year later.

Andrea was very tied to the Rochester area and wanted to move closer to her family and friends up north, so back to Rochester they went. “Rochester is a very food-oriented city.

After moving back, I joined the American Culinary Federation. I worked with a series of restaurants and worked my way up from cook to chef,” he said. Jim opened his own restaurant in Rochester in 1989, called “Bolgers,” which was his mother-in-law’s maiden name. “It was a family effort to do this restaurant. She oversaw the business aspect of it, and I took care of the kitchen.” And it truly was a family affair. Andrea worked in the dining room, his sisters-in-law were waitresses, and his brother-in-law worked as a bartender. The family ran the restaurant through the spring of 1996. The establishment was very popular, earning positive reviews from several publications like The Toronto Star and Yachting Magazine. But it was a seasonal business, which was a challenge, and Jim realized he would have to eventually close the doors.

He sold all the restaurant equipment and moved back to Ft. Myers with his family in 1996. Jim has worked with many restaurants through the years, developing and overseeing kitchens and rewriting menus.

He worked for Sysco Food Services for 18 years. He was a regional salesman for the area. “I covered restaurants from South Venice to Boca Grande for many years. They brought me out here because I was a chef, and they wanted someone who could work and communicate with high-level chefs.” He distinctly remembers walking into Hudson’s in 1996, where he met Phyllis, his first customer on the island. “I remember it well, because everyone was watching the O.J. Simpson verdict on television,” he said.

After 18 years with Sysco, Jim left the company in 2014 when he became very ill. “I had a liver problem that did not get diagnosed properly, and it had gone on undetected for years. I was so sick by the summer of 2014 that doctors told me I might not be around for Christmas,” Jim said. Jim was placed on a transplant list and waited with hope to get the phone call that a match was available. Jim and Andrea moved to Jacksonville to be closer to the hospital where the surgery would take place. He received that life-saving phone call in September, 2014.

“After the recovery process I decided that I was not going to go back to sales. It was a fantastic career, but I wanted to go back to cooking, where I had been the happiest,” he said. He knew he needed to slowly get back on his feet, so he contacted the owners of Lock ‘N Key Restaurant in Englewood, Susan and Rocket Atamanchuk and Chef Steve, who were friends of his. “I needed to be in a high-quality, busy atmosphere to see if I could handle going back to work,” Jim said.

He worked in the kitchen there for the 2015 season. “I walked in basically in recovery mode and left feeling very confident and strong.” In May of 2015, he was invited to Newport, Rhode Island to work in a restaurant called the Revolving Door, an establishment where chefs come from all around the nation to work the kitchen for one month, bringing with them new ideas for menu items.

“That was a lot of fun. It was nice to be able to bring some of my thoughts to the restaurant and also to represent Florida. I did a lot of fresh fish dishes, because we could get fish straight from the docks just like we can here – just different kinds of fish.” Jim said a couple of friends from Boca Grande went up to visit him and dine at the restaurant while he was there.

Most recently, he’s been adding new options at Hudson’s for the people in Boca Grande to enjoy. He’s created new, scrumptious additions daily to the lunch menu, like shrimp stir fry, and specialty salads like salmon with tortellini and artichokes, so you’ll want to take a peek in the salad section for new, tasty summer specials. “I’m also trying to get a dinner program started – a home meal replacement where people can stop in and grab a take-home dinner for two or a larger portion that can feed up to four,” Jim said. “It’s a growing market segment that is getting very popular.”

A couple of recent dinners Chef Jim has concocted were shrimp and grits, and beef and mushrooms with blue cheese potatoes and shallots. “This is restaurant-caliber food. It’s packed in heat-and-serve containers that are microwavable and waterproof,” he said. “There are a couple of local fishing captains who stop in and take them out with them on day trips.”

He said the kitchen staff at Hudson’s is trying to get a better idea about what kinds of items people want to see on the menu. All suggestions are welcome.

Jim worked at PJ’s Seagrille for a short time before starting his most recent position. “J.T. and I have been good friends for years. He was short-staffed and needed a hand to get through the season,” Jim said. “I remember I helped out at the restaurant the day his daughter was born. And he invited my whole family to eat at PJ’s the night my house was struck and burned by lightning.”

Jim and Andrea live in Rotonda. They have two dogs, both of which belonged to their sons at one time. Andrea is also an employee at Hudson’s. She’s been working there for about seven years. Jim and Andrea have three children. Their oldest son, James, is 29 and is a Hillsborough County sheriff’s deputy. He also is a former U.S. Army ranger who has been deployed overseas several times. Their daughter, Brynn, is 27 and recently graduated from Florida Gulf Coast University. She will begin teaching elementary school in Ft. Myers this fall. Their youngest son, Brett, is 25 and is also a chef. He currently works in Denver, Colorado at Punchbowl, a fast-growing restaurant/entertainment establishment that features upscale food and games including bowling, darts and ping-pong.

All the kids attended Lemon Bay High School in Englewood.

Following in his dad’s footsteps, Brett worked at PJ’s Seagrille for a while after graduating from the Culinary Institute of America a few years ago. When he is not working, Jim enjoys golfing and fishing. He also enjoys kayaking and exploring the water with Andrea.

He said he really enjoys working in Boca Grande because of the people. “There is a real sense of community here. People are very kind, and they seem to genuinely care about each other.”

Jim is open to hearing suggestions from island residents about what kinds of items they’d like to see on the menu at Hudson’s. Stop by and say hello to him sometime and share your ideas.

Newer PostIt’s a great nesting season, but beachgoers, predators and dogs present a problem
Older PostThank you all for making Ladies Mix & Match a great day!