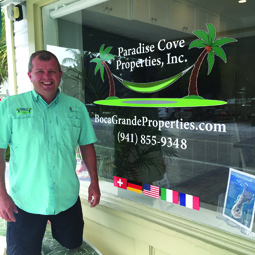 Jim Benson may be a young man, but his passion for life and his work ethic run deep. That’s not to say he’s a guy who can’t have a good time – he definitely can – but he has proven to be one of the most up-and-coming real estate brokers in this area and has elevated himself to that definition in leaps and bounds.

Jim grew up in the small town of Westford in upstate New York, just outside of Cooperstown. He was an only child who loved competitive sports, as well as fishing and hunting. Working on the family farm kept him very active. It was there where he developed his appreciation for the outdoors and a very hard work ethic.

“Those were long days. My stepfather traveled a lot for work, so much of the farm work was split between my mother, uncle and myself,” Jim said. “At times we had as many as 300 hogs and several beef cattle. I’d be in the barn at 6 a.m., ready for the school bus at 8 a.m., off to basketball practice at 4 p.m. and back in the barn at 6 p.m. Looking back, I wouldn’t trade it for anything.”

While farming was his family’s occupation for generations, they currently have just a few cattle.

After high school, Jim attended and graduated from the State University of New York with a degree in restaurant management. As soon as he graduated, he began working at The Cranberry Bog in Albany, but when the restaurant owners purchased another restaurant in Boca Raton, Jim was Florida-bound.

“It was a big change for me, but also a welcome one,” he said. “Nearly all of my family and friends were in New York, but my grandparents and an aunt and uncle lived in Orlando, so at least I had some family just a few hours away.”

After six more years in the restaurant business, Jim and one of his friends dipped their toes into real estate. They purchased a fixer-upper with the intent of flipping the property,

“I remember the home being in a 55+ community, so we had to convince my partner’s father to purchase it in his name. Our budgeted profit was a mere $3,000, but when we finished the home and turned it over, we made an $18,000 profit. Suddenly I was hooked on real estate.”

Not long after that, Jim went to work for a small boutique brokerage and quickly became a full-time Realtor.

After a short visit to the Cape Haze Peninsula Jim found the area much like his hometown – without the hills or cold – and instantly fell in love with the character and culture of the various communities.

“It just felt like home from the very first day, from the hospitality of the people I encountered and the Midwest small-town influence to the relaxed pace.”

In 2004, Jim relocated and helped to open a branch office of the same company on the East Coast. The real estate downturn in 2006 brought some changes, and toward the end of 2007, Jim decided to venture out and open his own brokerage firm. Paradise Cove Properties was born.

In 2013, Jim was featured in two shows airing on HGTV’s “Beachfront Bargain Hunt” regarding area real estate. With the focus of the show being on Manasota Key and South Gulf Cove, the area received national attention on network television and Jim saw a nice boost in sales.

“I’ve never been so exhausted in my life as when filming those shows,” he said. “You’re with a seven-person production team from 6 a.m. to 6 p.m. for five days, doing something you never thought you’d be doing. It was an incredible time and a lot of fun. If someone asked me to bring a show like that to Boca Grande, though, I would say absolutely not. The Boca Grande market is hot enough, and this is one place that is best kept secret for as long as possible.”

So what directed him from farmer to restaurateur to real estate?

“I like to sell,” he said. “I grew up on a farm where there’s a lot of hard work and selling involved. For instance, you buy a hog at 35 pounds and fatten him up to 180 pounds, and then you sell him. My family influence includes some of the greatest salesmen I’ve ever met. They would find a tractor along the roadside, fix it up and sell it. When I started flipping houses around 2002, my first deal I budgeted a profit margin of $3,000 … I ended up making $18,000. I was also burned out on the restaurant business. At the age of 26 I was a general manager of a restaurant in Boca Raton with 90 employees, and I just got burned out.”

More change began in 2009 when he sold a home to Nicole Duerrschmidt. Today they have two beautiful daughters – Sophie, 3 and little Ella, who is six months old.

Nicole came from a small-town environment herself, only it was in East Germany. When the Berlin Wall came down, her family traveled throughout the United States, and Nicole instantly knew where she wanted to be … in America.

Jim, Nicole and the girls spend a lot of time outdoors. Sophie and Ella have a playground in the backyard, and Nicole is working on her first garden. Jim is usually fiddling around, playing with the kids or doing maintenance.

“I’ve got a pretty demanding work schedule but we find time to be together,” he said. “My favorite part of the day is always dinner; we sit around the table with the television and phones off and talk about what each of us did that day.”

Jim opened his third office on Park Avenue next to the Pink Pony in 2015. Sophie attends the Boca Grande Child Care Center and plans to go to The Island School as well. The Benson family is getting to know some of the other families on the island through community events.

“While we live just off-island in South Gulf Cove, we’re really starting to thread ourselves into the fabric of Boca Grande,” Jim said. “Both of our daughters were baptized here, and they’ll go to school here. We love attending the Lighthouse United Methodist Church of Boca Grande, too.”

The couple has quite an entrepreneurial spirit. They own several rental properties, building lots, a commercial building, three real estate offices and even built and operated The Cove Bistro on Gasparilla Road. Jim handles most of the real estate endeavors, and Nicole ran the restaurant until she became pregnant with Ella. “When Ella came along, we realized we were pushing too hard and something had to give,” he said. “Closing the restaurant was a tough decision, because we had the best staff and the best clientele. It’s not always easy to make a choice like that, but we got to a point where it didn’t matter what anyone else thought. We had to put our family first.”

They now lease the restaurant space to Ephesus Mediterranean Grill.

Jim is excited about the road ahead.  The real estate company saw rapid growth in the past couple of years, and last year, his was the largest-producing boutique brokerage on the Cape Haze Peninsula. The family plans to spend some time in Germany this summer, then go back again for Christmas.

“The next few years are going to be fun,” he said. “We made long-term investments last year in the Placida and Boca Grande markets, with rock-solid employees to help us build on our success. My kids are lively, healthy, simply amazing and drive me slightly nuts!  It’s just a good place to be right now.”