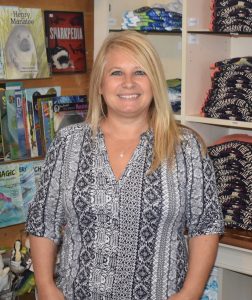 BY SUE ERWIN – Jennifer Summers has a daily view of Boca Grande Pass that many people would pay a good amount of money to see just one time. She works in the Port Boca Grande Lighthouse at Gasparilla Island State Park at the southern end of the island.

“I’ve seen so many cool things from this window,” she said. “I’ve seen eagles and manta rays jumping, schools of tarpon, dolphins, manatees … all kinds of sea life.”

Jennifer is the Boca Grande Lighthouse museum/gift shop manager. She’s a full-time Barrier Island Parks Society employee. She works various days, and that changes in November, when the museum opens seven days a week. She’s been with the organization for three years.

“It went by really fast, and it’s hard to believe I am starting my fourth season,” she said.

Jennifer is originally from Goshen, Indiana, near the northern part of the state.

She met Jon, her high school sweetheart (and future husband) in Goshen. A mutual friend introduced them.

“We’ve been married for 29 years, and our friend still says we should thank her on our anniversary each year.”

Jennifer and Jon have three children: Emily, Ben and Shelby.

After graduating from high school, Jennifer worked in the court system for several years, until she had her first child.

“I went back to work after six weeks, but it was too hard. I wanted to be home with my daughter.”

Jennifer and Jon sold their house in Indiana and moved to Scottsdale, Arizona in 2007. Jon accepted a sales position there, which led them to the area.

“We had been there multiple times for vacation, and we really loved it,” she said. “So when this opportunity came up, we decided to go for the adventure.”

“I really enjoyed the job; it was different every day,” she said. “I’ve made some very good friendships that I still maintain today. The doctor and I remain very good friends, as is the case with many of the patients.”

Jennifer moved here with her family in 2015, seeking a change of scenery and climate.

“We needed a change,” she said. “Our youngest child was still in high school, so her task was to research school districts in Southwest Florida and help us choose our next move.”

The family narrowed it down to two places, and they knew they wanted to be close to the water, so they chose Charlotte County.

Shelby graduated from Lemon Bay High School in 2018, and she recently started college.

After moving to the area, Jennifer saw an advertisement for a part-time position at the museum gift shop. She applied and was offered the job. She worked part time for a few months, then segued into full time.

Every August the museum and store closes for maintenance, painting, and getting the floors cleaned and sealed.

“These are 120-year-old southern yellow pine floors,” Jennifer said. “They are original to the Lighthouse, so we make sure we take care of them.”

There is a new fossil exhibit at the museum that is nearly complete. Staff restored an old closet and filled it with interesting items. There will be a couple of different fossil collections, including a dolphin skull and a seashell collection. The exhibit should be completed by the end of October.

“We’re very excited and proud to expand with a new educational display,” she said. “Our visitors love to learn about nature.”

One of the popular items at the museum is the fossil touch box, a box that displays two preserved baby sea turtle hatchlings in a sand nest. The preserved hatchlings were wash-backs that tried to make it in the sea, but washed back up to shore and didn’t survive. Visitors can learn on a smaller scale how much the baby sea turtles have to work as they exit the nest and make their way toward the water.

“This was created by Bobby, a former park ranger,” Jennifer said. “He made one for us and another for the parks to use at educational programs. Everyone loves it because it gives you an idea of what the nest would look like, and the tough journey the turtles experience.”

Some of her duties as gift shop manager include researching and buying merchandise for the store, managing the sales, keeping inventory and stocking the shelves. She also meets with local artists to look at their work and see if it might be a good fit for the shop.

“We see roughly 32,000 visitors each year here, and really that’s 11 months, because we are closed in August.”

People who haven’t been to the museum shop before would be surprised to see how much is offered. Jewelry made by local artists, Christmas ornaments, souvenir items, T-shirts and more fill the shelves and walls of the 96-square-foot gift shop.

“I try to fill it with the best things I can find in the price range that works for us,” she said. “I wish more people knew about our shop, because I have discovered over the past few years that there are many people on the island who didn’t even know we existed.”

Barrier Island Parks Society is a nonprofit organization, so the proceeds from the park benefit the Lighthouse as well as the four barrier island parks.

“We function on donations, so without that, we couldn’t remain in operation,” Jennifer said. “It’s a citizen-support organization.”

She did notice last season that there were more locals visiting the museum than in previous years.

The building has several rooms with different themes noting the history of the Lighthouse and creatures of the sea.

Jennifer is also the volunteer coordinator for the Barrier Island Parks Society. The organization has more than 180 volunteers, and she recently brought in five more. She is responsible for the orientation and training of the volunteers. Last year, she and BIPS Executive Director Sharon McKenzie started a Beach Ambassador program, where volunteers walk the beach and help educate visitors about good beach etiquette and the importance of taking trash with you when visiting the beach.

“We thought it would be a good benefit for the park, because the rangers get so busy during season,” she said. “Last year we had 20 Beach Ambassadors, and this year we hope to get more.”

When she is not working, Jennifer relishes spending time with family, traveling and exploring new places. She also enjoys swimming, snorkeling and collecting shells on the beach. She said she has really missed going to the beach this past summer, due to all of the problems from the red tide.

Although she has not yet gone tarpon fishing, it is on her list of things to do.

“My husband and I really want to go,” she said. “We have fished before in Indiana, but we’re still learning about saltwater fish.”

Floral landscaping is another one of her favorite hobbies.

Jennifer has two dogs, Sawyer and Finn, that she calls her little adventurers.

“They are a very important part of my family, too.”

If you have an item that you feel would be good for a future exhibit at the museum, whether it’s a fossil, shells or an old photograph that could be tied to this idea, contact Jennifer. She would like to talk with you. Contact her at the museum at 941-964-0054.