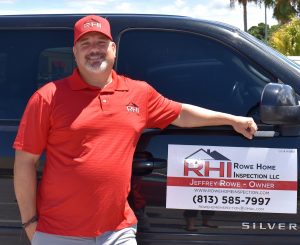 If you want to talk to an expert on home inspections, look no further than Jeff Rowe, owner of Rowe’s Home Inspection, LLC.

The vision of his company is, “Working to protect our family and yours.”

Jeff has owned the business based in Rotonda for the past two years.

Born and raised in Miami, Florida, Jeff always had a passion for understanding how things work. He spent a lot of time taking things apart and putting them back together again.

He attended high school in Tampa, and after graduating he decided to join the military. “My brother was in the Navy, so that inspired me to join,” he said.

Jeff served in the United States Army from 1990 to 1993 as a paratrooper in the 82nd Airborne Division. “I was at Fort Bragg for most of the time,” he said. “I didn’t end up going over to Desert Storm because of a delay in airborne training.”

After serving his country, he decided to go back to school at ITT Tech in Tampa and earn a degree in electronics engineering technologies.

He was hired by Symbol Technologies, an American manufacturer and worldwide supplier of mobile data-capture and data-delivery equipment.

“I worked on barcode wireless communications and point- of-sale communication systems for scanners and registers,” he said. “It was interesting work. I eventually went into consulting work with Fortune 500 companies.”

He worked in the technology field until 2006, when the industry took a hit and jobs were getting harder to find and keep. “It was great working in the field, but I knew it was time for me to move on to something else,” he said.

Jeff has more than 25 years of experience in all aspects of the information technology industry, including installation, inspecting, troubleshooting, sales and customer service for Fortune 500 companies.

Over the years, he also gained experience with building houses and fixing things around the house. After doing some research, he found a program in which he could learn to become a licensed home inspector.

“I always wanted to start my own business and slow down and do things on my own,” he said. “Being in the technology field, I did a lot of traveling over the years and missed a lot of time with my family. So it’s been great being able to make my own schedule.”

Owning a business where he has the ability to combine his personal interests and his professional experience is a dream come true.

Jeff said he enjoys being able to work at his own pace, and he will take on only one customer per day – ensuring that a quality inspection will be provided for each client.

“I take my time, and I don’t rush through jobs – whether it’s a pre-listing inspection, a wind mitigation inspection or a pool inspection. When a client trusts me to do a job, I want to make sure it’s done right. I take a lot of pride in what I do.”

A typical inspection takes about two to three hours, and then Jeff goes home to complete the software part of the service and do the required paperwork.

Jeff said that after Hurricane Andrew devastated the southeast Miami area in 1992, the State of Florida insurance industry started investigating how homes were being built, and they created a standard form that insurance agencies use to record how well a home is constructed.

“The form documents what kind of roof is being put on the home and how many nails are used to nail down the rafters, so they know how strong that house is and what kind of weather it can handle,” he said. “It gives them a snapshot of what their liability is to cover a home, and a way to judge their liability and come up with a fair premium for a policy for any particular house.”

He said business was steady during the winter season, but it has slowed down a bit this summer.

In the future, Jeff hopes the company will grow so he can possibly bring his son on board to work with him and learn the business.

He has been busy recently going out and meeting new Realtors and other businesses in the area to network and promote his company.

“It’s a tough field to break into, because once people find a business they like working with, they’ll repeatedly use them,” he said. “And most inspections need to be in a certain amount of time, so when there is a scheduling conflict, that’s when people will call upon someone new. I just try to stay hopeful and optimistic.”

Jeff is married to Kim, who is the human resource director at The Gasparilla Inn & Club. The two met several years ago, just before Jeff experienced a very serious recreational vehicle accident.

“I was wheelchair-bound with both my legs broken, and she was determined to stay by my side throughout my recovery … and I’m very thankful for that.”

Kim handles the administrative and marketing side of the home-inspection business.

Jeff and Kim currently live in Rotonda. They have six children between them, as well as two dogs and one cat.

Joshua and Nicole are 15, Hannah and Andrew are 13, Ryan is 11, and Jeff is also the father of a 19-year-old who is independent and on her own.

Dogs Harley and Duke and Whiskey Blue the cat complete the family.

“Whiskey Blue is a ragdoll, so he has a beautiful coat and he has big blue eyes,” said Jeff.

When he is not working, Jeff enjoys fishing, darts and spending time with his family. And, of course, spending weekends with the family in Boca Grande.

“We like going in the summer, because the beach isn’t crowded and it’s the perfect place for quality family time,” he said. “We used to have a boat, but it was so difficult to keep up with and maintain. So now, when I want to go fishing, I just charter a captain.”

Jeff said the family has converted the backyard of their home into a little oasis, where everyone can enjoy time relaxing together.

“I really like to hang out in the yard and play games with the kids, since I missed so much earlier when they were younger,” he said. “Sometimes that’s more fun than going out to expensive events.”

Rowe Home Inspection is licensed and insured throughout the state of Florida. You can expect detailed, thorough inspections on all major components of the property based on the guidelines established by The Florida Association of Building Inspectors.

Being a veteran himself, Jeff offers a military discount for those who have served their country.

To learn more about Rowe Home Inspections, you can contact Jeff at 813-585-7997 or go to rowehomeinspection.com.

Newer PostDo you love sharks? Do your kids love sharks? Check this out
Older PostDeadline approaching for small business claims from Irma