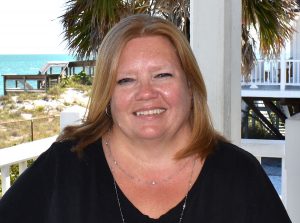 Janet Johnson has one of the most scenic views she has ever had from a desk job. Her current position with the Florida Department of Environmental Protection as administrative assistant at Gasparilla Island State Park affords her a spot that overlooks the beach, lighthouse and Boca Grande Pass.

Originally from Clarksville, Tennessee, Janet moved to west Tennessee with her family when she was 16, where she completed high school. Upon graduation, Janet decided to enlist in the United States Air Force when she was 18.

“College was really expensive, and I knew my family couldn’t afford it, so joining the military was another option,” Janet said. “It was a very good decision — I learned a lot during my training, and I enjoyed seeing many places I would not have had the opportunity to visit at such a young age.”

After she completed basic training, she served in South Korea at Osan Air Base as a heavy-equipment mechanic.

“It was very different in that assignment,” she said.  “South Korea has high humidity like we do here, but in the winter time the winds come down from Siberia. At that point in my life, it was both the coldest and hottest place I had ever been.”

Most of her exposure to the country during that time was with the town located right outside the base.

“It catered to GIs – there were lots of bars, shops and restaurants,” she said. “Everything you could need or want was readily available.”

“It relocated all of us,” she said. “The whole base was shut down. It was completely destroyed. To this day they still do not have active duty military at that location.”

Because of everything that had happened at the base, the Air Force let Janet select her next destination, and she chose Little Rock Air Force Base in Arkansas, because it was the closest base to her family. That’s where she finished her military career. Her final rank was Senior Airman (or an E4) in the USAF.

Janet met her former husband, Steven, in South Korea. He was from Maryland. They were married in Florida after they transferred back to the states.

When Janet had almost finished her four years of duty, she discovered she was pregnant with her daughter, Kelsey. She and Steven moved back to Tennessee and lived there for almost 20 years.

Kelsey is now 25 and is a University of Memphis graduate. She works for a law office in Tennessee.

Janet and her current spouse, Stephanie, visited Ormond Beach for a vacation last year, and they both realized they wanted to live in a warmer climate and be near the beach. So she began applying all around the state, and much to her surprise she received a phone call a few months ago about the administrative position vacancy at Gasparilla Island State Park. After an extensive phone interview, Janet was offered the job.

“I was familiar with some of the software programs they use here, so I think that’s probably one of things that helped me get the job,” Janet said. “I felt very fortunate, and we started looking into the area right away. After some research, we found a house here, sold ours in Tennessee and moved down.”

She said she hasn’t met any members of the Barrier Island Parks Society yet, but she’s looking forward to getting to know them as well as working with Sharon McKenzie, executive director of the organization.

Janet worked for the State of Tennessee for 13 years, and combined with her military experience, she figured she had a pretty good chance of landing something with the State of Florida. She’s done similar work like what is required in her current position, and she’s also managed the driver’s license station in Jackson, Tennessee and worked with the Department of Health for the state for a few years.

Janet and Stephanie currently live in Englewood with their 3-year-old Yorkie named Jack, who is adjusting very well to his new home. The pup really loves spending time in the outdoor-screened porch area.

They’re very happy they chose Englewood as their new home.

“We’re both crazy about the beach, and we both love warm weather, so we are very excited to be here,” she said. “We really like Englewood. It’s a nice, quiet town and has everything we need. And the people have been very friendly.”

When she is not working, Janet enjoys going to the beach, attending music concerts, reading and spending time outdoors.

“We’re still getting settled in, and once we are caught up, we’re really looking forward to exploring some different areas of the state.”

From her desk overlooking the water, Janet has seen manatees, dolphins and stingrays, and she’s looking forward to seeing the giant masses of tarpon that will soon be visible as they roll to the surface of Boca Grande Pass. She has never been fishing for silver king, but she’s looking forward to learning more about the fish as the annual tarpon tournaments begin to take place over the next two months.

She said all the staff members at Gasparilla Island State Park have been very accommodating and supportive.

“Everybody has been super friendly and very nice, which has been great,” Janet said. “They have all made me feel very welcome, and they’ve all been very helpful when I have questions or don’t understand something.”

Janet will be exploring more of the state soon, as she is scheduled for staff training in Tallahassee and Orlando.

“I’m really looking forward to doing some networking with other people in the state parks system,” she said.

Janet is also looking forward to her daughter coming down to Florida to visit her in June.

“This has been the longest that I’ve been away from her, so I can’t wait to see her and spend time with her and introduce her to the island.”

If you’re planning a visit to Gasparilla Island State Park at the south end of the island, stop in the office and say hello to Janet. She’ll be happy to answer any questions for you and provide you with information about our four state parks.