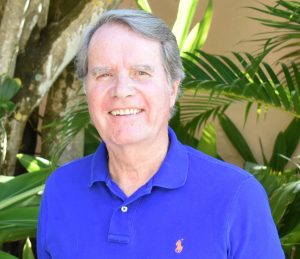 After graduating from college in 1962, Jack Carley had almost a year before entering officer candidate school, so he decided to drive to California to do some sightseeing and a little political networking. He had just turned 21 that summer, and some very important things happened on that trip. But let’s go back a bit.

Jack was born in New York City at Columbia Presbyterian Hospital, making him a bona fide New Yorker, but he was raised in New Jersey, across the George Washington Bridge in a town called Bergenfield.

“I went to public schools there and graduated from Bergenfield High School in 1958, where I was student body president,” Jack said.

He attended Rutgers University on a scholarship, waiting tables and working during the summers for the money required each year. He majored in history with an English minor.

In 1962, Richard Nixon was running for governor of California, and Jack sent a letter expressing his interest in working on the campaign.

“I remember Ron Ziegler was there, and Dwight Chapin was working in the office,” Jack said. “I was responsible for making sure all correspondence was delivered to the right places.”

While working on the campaign, Jack learned that they needed someone to drive Mrs. Nixon around southern California for her daily schedule. Jack was offered the job, and after accepting the position he rented a studio apartment on Beverly Boulevard. He and Mrs. Nixon grew quite close over the course of the year. Whenever she came to California, Jack drove her to various events.

“I was in heaven,” he said. “I was 21 years old, and I was really having fun. We became very good friends, and we spent a lot of time talking. She was a very nice person.”

Jack recalls that he and Mrs. Nixon listened to John F. Kennedy’s Cuban Missile Crisis speech together in October of 1962.

Then the election transpired and Nixon lost, and Jack was out of a job.

Knowing he had to report for active duty in May of 1963, he decided to drive from California to Florida, stopping in various cities along the way.

He stopped in Fort Lauderdale to experience the spring break scene and found a job as a bellhop in a hotel until he had to report for service.

He served overseas in West Germany. “When Kennedy was assassinated, we were in the officer’s club and no one knew what was happening, but we were told not to leave the post.” He learned of the tragedy later that evening.

After completing his service in the Army, Jack attended law school at Yale University. He recalls he was one of five veterans in his class, and he was also the oldest.

“It was a very exciting time, but the war (in Vietnam) was extremely divisive, and there was a presidential election happening.”

After his second year of law school, Jack was interviewing for clerk positions.

The senior partner of the Nixon Mudge Rose Guthrie Alexander and Mitchell Law Firm invited him to join the business.

During his third year, the primaries had started, and Jack was recruited as an advance man, a staff member who goes into a community and makes all the arrangements for a candidate to appear at events.

“In those days there was no secret service, and there was a lot of contact with the candidates,” he said.

“I was doing the same kind of work for him as before, but the assassinations of Bobby Kennedy and Martin Luther King had changed things, and President Johnson assigned secret service to the candidates.”

Jack went on to work for nine different firms after finishing law school. He married and had two daughters during that time.

“I don’t think of my work life as a career, I think of it as an adventure,” he said.

In 1981 Jack went to Washington to work with the Reagan administration. He intended to spend a couple of years there and ended up spending about six.

He eventually became general counsel for the Office of Management and Budget and was in charge of the federal budget at the White House.

After that he returned to New York to practice law at a firm named Donovan Leisure.

In 1993, when Rudy Giuliani was elected mayor of New York City, Jack worked in his administration.

In 1994, Jack became deputy attorney general for the State of New York. He was in charge of all the actions that the state would bring forth.

He litigated many complex cases over the years, including a huge accounting fraud case for Cendant Corporation and a national race discrimination case for Avis Car Rental.

In addition to many other successful litigation cases, he was appointed in 1971 by President Nixon to the State Department’s Board of Foreign Scholarships, which oversaw the Fulbright Scholarship program.

“As part of that appointment, I travelled to six African nations (Liberia, Ghana, Nigeria, Ethiopia, Uganda and Kenya) on behalf of the United States for six weeks to see how well the programs were functioning.”

When Jack met his wife, Pia, he was a lawyer and senior vice president at the Cendant Corporation. Pia worked for NBC for a number of years, and that’s where Jack met her – at the studio in the 30 Rock building in October of 1987. They dated until 1992 and then decided to go their separate ways. Keeping in touch through the years, they got back together in 1998 and were married in 2000.

“I think it was destiny,” he said.

They have four children between them and four grandchildren. They also have a dog, Tosca.

After retiring in 2009, Jack audited classes at Columbia University and served on the disciplinary committee for the State of New York Bar Association. He currently serves on the board of the Richard Nixon Foundation Library and Museum. As a hobby, he visits presidential museums and sites such as birthplaces or homes – so far, 37 in all.

Jack and Pia have been coming to Boca Grande since 2014. It was a brutal winter that year, and they explored the east coast of Florida, then visited Sarasota and Naples. Jack heard about Boca Grande but didn’t know anything about it, so they came here to learn more about the island.

“We had a dog that my wife insisted come with us, and we learned that The Gasparilla Inn would accept dogs at their cottages.”

The first year they came for just a few days. The next year it was for two weeks. After their third winter here, they decided to purchase a condo in Harbor Shore in 2017. They divide their time between Boca Grande and their home in Long Island.

“We still have an apartment in New York, but we travel a lot … we’ve been all over Europe.”

They recently toured Iran with a group from Yale.

“I think we were probably the only American tourists there,” he said. “The countryside was incredibly beautiful.”

Although he stopped working in 2009, he wanted to remain active. He is an avid tennis player and a board member of the Johann Fust Library Foundation. He’s involved in Royal Palm Players, and he played the campaign manager in “The Best Man” production last fall.

“The people at RPP are a very fun group – they are just terrific to work with. I never realized how much work went into each of the performances,” he admitted.

Jack serves on a committee for the Friends of Boca Grande that chooses speakers for the “Presidents and Politics” events. The next event, “Above and Beyond: JFK and the U-2 Pilots during the Cuban Missile Crisis,” is scheduled for Monday, Feb. 18 at the Boca Grande Community Center Auditorium.