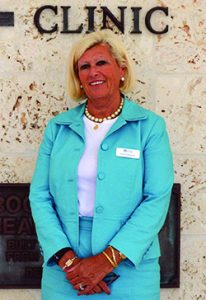 BY SUE ERWIN – Hilja Bilodeau has been keeping very busy as CEO of the Boca Grande Health Clinic since last summer. She officially started the job on August 1, replacing former CEO Jon Sielert. Her duties include overseeing all of the operations at the clinic on a day-to-day basis.

“My responsibilities include making sure every patient gets the care they need and making sure we are providing the level of care that our mission says we are here to do,” Hilja said.

Hilja has an extensive background and came to the clinic with a long and distinguished healthcare career, beginning with her training and clinical work as a registered nurse at Brigham & Women’s Hospital to her most recent executive position with Harbor Medical Associates in Weymouth, Mass.

“I was a senior vice president for a midsize physician group for 19 years in a suburb of Boston. It was a wonderful place, and I really loved my job,” Bilodeau said.

In her last role she was directly responsible for the management of clinical operations for a multispecialty clinic, an AAAHC-accredited endoscopy center, an IAC-certified vein center and an urgent care center. She was instrumental in growing the practice from 15 to 75 physicians and from two locations to eight.

Hilja and her husband, Paul, live in Rotonda. They purchased property there several years ago and had a house built with plans to eventually retire in the area.

Paul is a retired firefighter/captain and also owned a side business as an electrician.

He retired last summer, but Hilja admits she wasn’t ready to slow down just yet.

“I love working. I could have chosen to retire, but I didn’t want to,” she said.

While working in Massachusetts, she had a conversation with a colleague during a conference call one afternoon and learned about the CEO vacancy at Boca Grande Health Clinic.

“I think it was fate that we had that conversation. I called to inquire about the position and came down for the interview, and the stars just aligned. I could not be happier,” she said. Hilja said the dedicated staff at the clinic been so welcoming, and the physicians are of very high caliber.

“They have exceptional competency and provide high- quality care,” she said.

After becoming a nurse and working in the field for many years, she realized there was more she could do to help with the broader aspects of healthcare. That’s what led her to pursue an administrative role. She went back to school and took business classes in healthcare reform and accepted a position with Blue Cross Blue Shield for seven years.

“As a nurse I’ve always been an advocate for patients getting the quality care they deserve,” she said.

Hilja added that she knew Boca Grande was the right move at this point in her career.

“When I spoke with the physicians and staff and learned about the quality of care they strive to achieve, I knew that it would be a good fit. Plus, we’re avid boaters and golfers, so this move is really perfect for us,” she said.

Hilja’s father was from Finland and her husband is French, so she often gets inquiries about the origin of

She met Paul when she was in kindergarten. Growing up, she was best friends with his sister.

“It was a small town. He’s a year older than I am, and we did everything together as kids. Everybody knew everybody,” Hilja said.

They attended different colleges, and later, when they were in their late 20s, they ran into each other at a party.

“I just happened to come home and visit that weekend. We ended up talking that night and made plans to play racquetball the next day, and that was it. People from our old neighborhood joked and said they always knew we’d end up getting married,” she said.

“Holly went to college in Canada at the same school my husband attended (St. Francis Xavier Catholic University), and she met her current husband there. They’ve been married for two years and she works in finance and acquisitions,” Hilja said.

Paul Jr. has his own executive recruiting business, and Thomas is a school psychologist. Thomas also has a music company called “In Your Life.”

Hilja said that since he is a middle child, Thomas was always very creative as a child. He picked up playing the piano and guitar quite naturally.

“I’m so very proud of all three of them. They are really wonderful adults and give a lot of their time back to the communities where they live. I have always stressed how important it is to pay it forward. And my children have good moral compasses. I feel very fortunate,” she said.

Paul played college football while attending St. Francis Xavier. All three children were athletic kids and played basketball. Thomas played football in a league in high school and travelled around the country. They still play and coach youth teams as well.

Paul Jr. has a son, Parker, two. He is the only grandchild at this time.

Hilja and Paul are both avid golfers and boaters.

“We love golfing at The Gasparilla Inn’s course on the weekends. It’s a beautiful course. And Paul golfs almost every day,” she said.

Hilja also enjoys reading, walking on the beach, going kayaking and being on the water as often as possible.

She describes her hometown of Cohasset, Mass. as very much like Boca Grande without the golf carts.

“It’s a small village right on the water on the Massachusetts Bay. It’s a pretty little New England town – a great place for summer sailing,” she said.

Although she has lived around water since she was a child, she’s not a fan of seafood.

“My whole life I’ve always gone power boating, sailing and kayaking. Every minute I could spend on water I would. People thought I was crazy when I used to turn down fresh lobsters for five dollars right from the boat … but I just don’t like seafood,” she said.

Hilja said the best part about her position in Boca Grande is the connection between the patients and the staff at the clinic.

“I feel very fortunate to be a part of this team. Everyone is very patient-centric. The staff is very competent and very caring, and our patients always come first. It’s so nice to see them here and then out in the community. Being a nurse, I’m always out talking to people and seeing what’s happening in town,” she said.

As the clinic’s CEO, Hilja said she looks forward to continuing her work with the dedicated staff, each of whom is committed to providing exceptional healthcare to the community. Look for Hilja at community events hosted by the Boca Grande Health Clinic, or say hello when you see her mingling with folks around town.