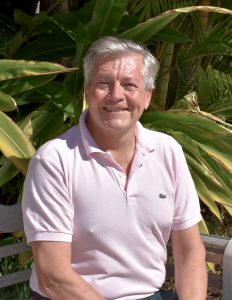 Hal McCombs and his wife, Lynne, have been visiting Boca Grande for nearly 30 years. They enjoyed their time on the island so much that they acquired a home here in 2014.

Lynne’s maiden name is Marmet. Her parents – Barbara and Bob – were very active on the island for years, which is what brought Hal and Lynne to Boca Grande.

Hal’s parents, Harold and Florence McCombs, lived in Port Charlotte for many years. He would visit them often before he’d heard about Boca Grande.

Hal made his debut with Royal Palm Players in the fall of 2013 at an Arm Chair production of J.M. Barrie’s “Half an Hour.”

“They were very good friends of my in-laws, and Jane asked me if I’d like to try Arm Chair theater,” Hal said. “Jane directed the play, and then I was asked to audition for ‘Oklahoma’ … and I just kept going from there.”

After that, he played roles in “The Actor’s Nightmare,” “Hello Dolly” and “The Ideal Husband.”

Last season he played Murray the Cop in “The Odd Couple” and Rusty Charlie in “Guy and Dolls.”

Hal is the current president of the Royal Palm Players.

He’s been extremely busy these last few weeks preparing for the upcoming presentation of “Duets,” which is premiering on Nov. 15 through Nov. 18. Hal is a member of the cast. The comedy features four couples dealing with the differences in their relationships. From love and marriage to work and travel, the audience will no doubt laugh at some of the real-life situations the characters undergo. Be sure to get your tickets soon, because the shows will likely sell out fast.

Hal considers himself a “lapsed” lawyer who spent most of his professional years working in federal regulatory law in the Washington D.C. area. He officially retired in 2013.

After graduating from high school, he attended the University of Texas in Austin and studied journalism and economics. He went on to study law at George Washington University.

“When my father was a senior officer in the U.S. Air Force, he was part of the military justice system and was on several judicial boards,” he said. “He was very fond of the law, and it seemed like a logical thing for me to pursue as a career.”

Hal met Lynne while he was in law school. Lynne was in graduate school at the time. He applied for a position at the Marmet Law Firm, had an interview with Lynne’s father, and was soon hired. He said that when he first met Lynne, she dismissed him quite quickly. After some time had passed, they went out on a date and soon the two were married.

“My boss became my father-in-law, and he and I continued to practice law together for many years,” he said. ‘It got complicated, but we were able to make it work.”

Hal was born in Pittsburgh, Pennsylvania, which is where his mother and father are from.

“When my father was in the air force he was on assignment in Korea, so my mother and I would stay with her parents,” Hal says.

The family also lived in western Texas and Oklahoma for a while.

They ended up moving to St. Louis when his father retired from the military.

“As a former air force officer, he went to work for an aerospace company, which is what many retired officers would do to continue on in the field,” Hal said.

Lindsay and her husband, Mikey Pomponi, are the parents of Grace and Mac. And Charlie and Devon are the proud parents of 4-month-old Charlie.

The family will be visiting Boca Grande for Thanksgiving, so it will be a very busy November for the McCombs.

“We’re prepared – we already have our turkey ordered,” Hal said.

Lynne’s brother and sister-in-law, Roger and Betsey Marmet, will be joining the family for Thanksgiving as well. They also have a home in Boca Grande.

Roger has one sister, Amy, who lives in San Francisco.

Hal and Lynne also have a home in Bethesda, Maryland, and they split their time between there and Boca Grande.

Although he had no prior experience in acting, Hal did say that between studying communications and his years of working as an attorney, being on the stage felt quite natural. He did some voice work for television and radio stations while he was in college, but he never appeared before the camera.

“I didn’t know exactly what I was getting into, but as soon as I started with the theater I just loved it,” he said. “It’s really a lot of fun. Whether you are behind the scenes trying to make everything come together or helping out with costumes, it’s very exciting to be a part of the production.”

RPP is always looking for more volunteers, and Hal welcomes anyone who is interested.

“It’s understandable that not everyone is comfortable on the stage, but there is plenty to do behind the scenes and before and after the shows,” he said. “We can always find something that needs to be done.”

Part of his responsibility as the new president is to grow the theater and make it an even bigger part of the community.

“Our shows are very well received, but we’re trying to find ways to get more people involved,” he said. “One of the things we are really focusing on right now is getting more organizational structure, and we need committees to make sure things get done.”

One thing he said the organization could really use right now is someone with social media experience to update Facebook for this season.

RPP has a comedy coming up in February, “Don’t Drink the Water,” and a musical, “My Fair Lady,” in March, so look for more information in the Boca Beacon about those shows.

“I promised my wife that this will be the year I will get better at golf and improve my bridge game,” he said. “I’m a lousy golfer, but I am trying to become a better player.”

He’s an avid fan of Jane Austen and said his favorite book by her is “Persuasion.”

Hal is on the vestry at St. Andrew’s Episcopal Church, where he helps out with the business side of running the church.

Hal said Lynne is a fantastic cook, so meals at home are always a treat.

“We also enjoy dining out at the many excellent restaurants on the island.”

If you’d like to learn more about volunteering for Royal Palm Players, or to purchase tickets for upcoming shows, call (941) 964-2670.