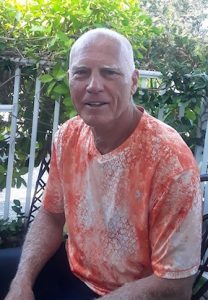 If you want to get a good workout out of the way before 9 a.m. on Mondays, head over to Banyan Tree Pilates & Yoga and take Hal Coxon’s spinning class. He’s been a spin instructor and personal trainer there for the past three years.

For those not familiar with the term, spinning is a high-energy indoor cycling class with warm-up and cool-down phases.

Hal leads an energetic class, and his students know he’s serious once the upbeat music begins. If you’re new to spinning, you are encouraged to go at your own pace. For the        regular attendees, it’s more like a community where everyone knows each other’s name. One student said she hates missing a class because she doesn’t get to catch up with friends afterward. “I always tell my students it’s their class — I’m here doing the work right along with them,” Hal said. “We’re all sweating it out together.”

The instructor usually dims the light, which encourages students to focus on their own efforts and not get distracted by others. Music is played while the class members explore flat cycling, hills and interval challenges. Standing climbs are added throughout the course, but not required. Light stretching is built into class time, but Hal encourages students to do more stretching on their own when the class is finished.

Originally from Harvey, Illinois, Hal attended Eastern Illinois University and studied zoology and chemistry. He continued on and earned an MBA from Eastern Illinois. After finishing school, he accepted a job in the west suburbs of Chicago.

Hal met his wife, Diane, when he was working in Wheaten, Illinois. After they married, Hal was transferred to Detroit, Michigan. They purchased a home in Ortonville, a village in north Oakland County, which is about an hour north of Detroit.

Diane was a music teacher and librarian. Hal worked for Bayer Chemical Corporation for many years. He dealt with automotive contracts and was in the polyurethane division.

“We supplied the urethane that makes the foam for vehicle seat cushions,” he said. “It was a very diverse company.”

When the international business announced it would be downsizing, Hal took an early retirement.

“I was lucky – I was there for the good times, and I retired when the cutbacks started,” he said He first took up spinning in Michigan after he retired when he was 58. He chose to take the spinning class because of the camaraderie it offered, and because it’s more fun to work out as a team than on your own.

“I joined a gym, and I saw guys who were my age but in much better shape than I was in – so I decided to try my best to keep up with them.”

He refers to working out as a lifestyle and said the YMCA and Banyan Tree are where he and Diane meet most of their social friends.

“Exercise makes you feel good,” he said. “The endorphins kick in, and you can eat whatever you want because you’ve already burned off the calories.”

Hal’s parents owned a home in Englewood, so he and Diane would often come down and visit them. After living up north for so many years, they decided to make Florida their full-time home.

“My wife fell in love with the area, so we decided to sell our home up north and move here a few years ago,” Hal said.

Hal and Diane have three children: Hayley, Chad and Brianna.

Hayley is engaged to Chris and lives in Boulder, Colorado. Chad also lives in Colorado and is a biomedical engineer, and Brianna is a paralegal in Lansing, Michigan. She is currently working on earning a degree in law.

“We’re very proud of them. They are all very successful kids,” Hal said. “We’re driving out to Colorado to see them all for Christmas.”

He said that although they live in different areas, the kids are all very good about staying in touch via FaceTime. They have all visited their parents in Boca Grande and enjoy visiting the island, especially during the winter months.

When he is not teaching classes or at the gym, Hal enjoys traveling with his wife. They’re planning a road trip to explore San Antonio, Texas this winter. He hasn’t done much fishing in Southwest Florida yet, but it’s something he hopes to learn more about in the future.

“My sister and brother-in-law have a boat in Placida, and they live here full time, so maybe this summer we’ll do some fishing.”

His daily routine includes waking up to Bloomberg business news to see what’s going on with the stock market while enjoying a cup of coffee.

Active members of the Englewood YMCA, Hal and Diane are at the gym about six days a week.

“There’s a man who is 84 years old and he works out at the YMCA every day,” Hal said. “He’s my role model. I want to be as agile and active when I reach that age. That’s my goal … I want to be in that kind of shape in 20 years.”

Throughout their lives, Hal and Diane have met most of their friends through health clubs.

“It’s a great way to meet new people who have similar interests.”

Shortly after he joined the YMCA, he noticed a sign announcing a need for spin class instructors. After speaking with an employee, Hal became the newest instructor a few days later. He teaches two days a week in Englewood and two days each week in Boca Grande.

A lady he met at the YMCA was also teaching spin classes at Banyan Tree Pilates & Yoga, and one day she asked Hal to fill in and instruct a class. Soon after that, he was asked to lead the classes twice a week in Boca Grande.

“Jan (Waters) also used to teach over at the Y as well, so when she and Ron took over this business, they asked me to come with them and be a regular instructor.”

When asked what he likes most about Boca Grande, he quickly summed it up: “Just about everything.”

“It doesn’t get any better than this – this is nirvana down here. The weather is beautiful. We are very happy here.”

Hal also teaches a second class at Banyan Tree. It’s called “Strength, Stamina & Stability.” This course is a resistance training workout for all levels. Students utilize lightweight dumbbells during a series of rhythmic movements. The class is designed to challenge all the major muscle groups by performing high-repetition exercises. The goal is to burn calories and increase your metabolism.

“Jan and Ron have done a wonderful job taking the business over,” Hal said. “Jan teaches several days a week, and she’s always working on trying to incorporate new programs to meet the needs of new and exising clients.”

To sign up for one of Hal’s spin classes, or any of the others offered at the studio, visit banyantreepilatesandyoga.com. Wear firm-soled shoes and light clothing. Bring water and a small towel. And be ready to burn a lot of calories.