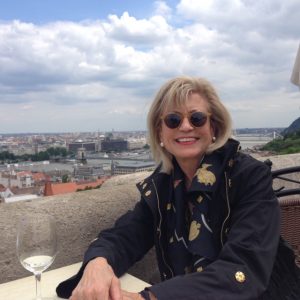 STAFF REPORT – Boca Grande resident Gina McFadden is the Vice President of the Boca Grande Art Center Board of Directors and also the Chair of their Membership Committee.

She was born and raised in Mt. Vernon, New York and graduated from high school in Rye, New York. Gina graduated from Barat College in Lake Forest, Illinois with a BA in Art History. During her career in the financial services industry she completed the Securities Institute Program at the Wharton School and the Kellogg Management Institute Program at Northwestern University.

After a brief stint in Boston with college friends, Gina moved to Chicago. It was there that she started a position at an organization where she worked for more than 39 years. Gina also met her husband, Marty, there.

“We were introduced at a party by a mutual friend who Marty knew from kindergarten and I knew from college!” Gina said. They’ve been married almost 43 years. 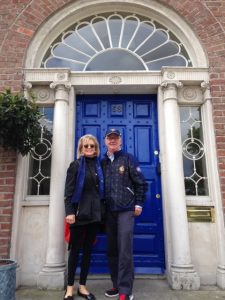 Because she recognized possible opportunities, Gina chose to join Chicago’s nascent options industry. She began her career in an entry level position with an organization that later became The Options Clearing Corporation. While OCC today has about 900 employees, Gina was one of 14 at that time. OCC is still today the world’s largest equity derivatives clearing corporation, the sole entity providing clearing, risk management and settlement for options traded on all US listed options exchanges.

For many years Gina worked her way through several departments before the 1987 market crash.

“Derivatives became a dirty word and it didn’t matter that OCC cleared only exchange listed options and that the contracts were issued and guaranteed by OCC,” she said. Options volume, OCC’s revenue source, plummeted resulting in downsizing and a major reorganization.

Gina moved to Member Services, the department working with the securities firms and brokerage houses that were OCC’s members.

“It was that management position that gave me the opportunity to learn the nuts and bolts of clearing options and made the rest of my career possible,” she said.

In an attempt to rebuild options volume back to pre-crash levels, OCC and the exchanges created The Options Industry Council, a coalition to educate retail investors about the benefits, and risks, of trading listed equity options. Gina was asked to join the Council and later was promoted to executive director, and then president of OIC.

“It was a challenging but fun change from the clearing side of the business,” she said.

At OIC Gina was involved in public relations and upgrading the national advertising campaign to promote educational classes across the US. A London office was opened to focus on a similar program there and throughout Europe. Options volume continued to grow and OIC partnered on educational programs with exchanges, securities firms and government regulators in Asia. Online education was introduced via a website, optionseducation.org, and OIC expanded its educational reach to include financial advisors and institutional managers.

“Since its inception, OIC has been a constant contributing factor to the explosive record breaking options volume,” Gina said.

While OCC has changed dramatically since Gina retired almost seven years ago, it wasn’t unusual then for management to wear several hats at once. For a period of time Gina was both president of OIC and also executive vice president of OCC’s Business Operations Group, that included Member Services, Business Development and Strategic Planning.

“It was very hard work but I loved it. I also enjoyed all the travel required for both businesses. My job took me all over the world. Sometimes Marty would join me for international conferences if he wasn’t tied up at work as a Managing Director for Marsh and McLennan,” Gina said.

Gina and Marty first heard about Boca Grande in the mid 1990s and mentioned it to friends who were looking for a home in Southwest Florida. Those friends loved it and built a home here. The McFaddens visited them annually for about five years prior to driving to spend Thanksgiving with Marty’s family on the east coast. Each time their friends called a realtor, but it was a few years before they decided to buy. They moved into their new Boca Bay home right before Y2K. While they continued to work, visits totaled about 30 days each year.

“Since our retirement in 2013 we now spend seven months here each year – and love it! We became Florida residents a few years ago,” Gina said.

Gina was invited to join the Boca Grande Art Center in 2015 by a friend who was president of the Art Center. She became board secretary and was asked to chair the membership committee. Carol Hall, the current president, asked Gina to be her vice president last year. She’s serving her second three-year term, and will go off the board next April.

“The Art Center is a very special place that brings together a lot of creativity and energy,” Gina said. “There’s such a broad range of talent from the exhibiting artists to the instructors who teach the 60+ multimedia classes. There’s no better place than the members’ opening night receptions for the many art shows – the gallery of paintings, ceramics and jewelry, the camaraderie, the wine and hors d’oeuvres, and the head start opportunity to purchase the work of a local artist.”

The Art Center has offered some incredible lectures ranging from a talk by the director of Washington’s National Gallery to advice on how to best protect your collection and tips on avoiding art fraud. The Art Center also supports ongoing art classes at The Island School as well as their summer camp for students. For years they’ve offered college scholarships to qualifying art students.

“The scholarship program is the heart of the Art Center,” Gina said.

“Most of our funding comes from our generous members, and the remainder from the proceeds from gallery sales, workshops and our biannual home tour fundraiser.”

Gina attributes the success of the Art Center to their high energy productive staff and tireless Board.

“Boca Grande has so many terrific charitable organizations and we’re proud to be one of them. Given this challenging time we hope that next season will be a good one.”

“We have filled our home here with the works of local artists. While I majored in art history, my studio artistic talent is woefully absent. I’ve taken a few classes at the Center but only my sailor’s valentine is on display – but not too prominently! And that’s one of the great things about the Center’s array of classes; there’s something for everyone, beginner to advanced.”

Gina and Marty are very active in the community.

“When we retired in 2013 we questioned whether there was enough going on in Boca Grande to keep us engaged and energized. Wow, were we wrong! We are huge fans of the Friends of Boca Grande programming and attend as many events as we can. They never fail to impress! Marty loves music and is an active member of their committee, working on the ‘All that Jazz’ and ‘Coconut Cabaret’ programs. He’s also president of the Boca Grande History Center that focuses on the preservation and education of this special island’s past. Last but not least, I don’t think we’ve missed any of Royal Palm Players’ performances since we’ve retired. They’ve come such a long way over the years.”

“I’m so impressed by all they do and the multiple charities they support, especially the current emergency relief fund for island workers and businesses. I’ve participated in a lot of different ways and last year I joined their Cook’s Tour Committee. It’s been a blast working with our team and creating fun and delicious ‘friend raiser’ events for our members.”

Gina has nothing but good things to say about their move to island living.

“I’ve met so many wonderful people and developed special friendships through the Art Center, my exercise classes at the Pass Club, the Woman’s Club, the Garden Club, two book clubs and party bridge,” she said.

While Gina’s disappointed that COVID-19 will prevent any travel for the foreseeable future, she’s keeping busy via Zoom and other apps to continue her workouts, book clubs and bridge games.

“I also love to cook and have been doing much more since the lockdown. It’s a shame we couldn’t share all those dinners with friends.” 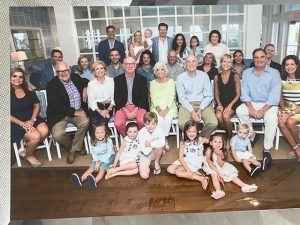 “We’re very close with all of them. The majority are in Florida, New York, Connecticut, California and Chicago where we just sold our home after 35 years. We’ll now be spending our summers in Indiana on Lake Michigan.”