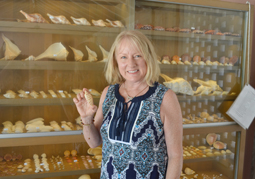 After decades of searching for shells on the beaches and at the sandbar in Boca Grande, Gay Weisenthal finally found one that she’s been coveting for years: the junonia. Scaphella junonia, or Juno’s volute, is a species of large sea snail, a marine gastropod mollusk in the family Volutidae. This species usually lives in water from 29 meters to 126 meters in depth in the tropical Atlantic. It has a pretty white shell with orange speckled spots on it.

Gay and her husband, Howard, are avid shell seekers, and they’ve spent countless days searching for shells in Boca Grande. Howard found a junonia shell here last year, and Gay has been trying to tie the score since then. She’s been an island visitor since she was a young girl. “I’ve been coming to the beach here since I could walk. My father used to love bay fishing, so we’d always come to Boca Grande,” she said. She grew up in Fort Meade, FL and attended the University of Florida in Gainesville.

“My siblings and I are sixth-generation Floridians, having descended from true ‘Florida crackers,’ those pioneering cowboys who cracked the whip as they drove cattle down from Georgia to settle in central Florida. My father, while a successful real estate appraiser and land surveyor, was also quite a naturalist and steward of the land, who taught us all about Floridian flora and fauna from an early age,” she said.

Gay met Howard at UF. She studied educational psychology and Howard studied archeology. Both of them are true UF “Gator” fans. They’ve been coming to the island every summer since they met. They were married in 1980. Gay earned a master’s degree from UF and started her career as a psychological case manager with a school system in Baton Rouge.

She worked with students from kindergarten through eighth grade for five years, while Howard taught archeology at Louisiana State University. “Members of our staff received assignments from the district. I had two elementary schools and a middle school, so I would travel from school to school to see the students.” She said she choose that career path because she was always interested in helping other people and also because it was challenging. “I think the opportunity to work with all of the kids of different ages within the school system was a big task. Many of them might not have been able to afford a private practitioner, so at least they had access to some support through the public school system.”

She recalls that, while being hospitalized at a young age, she noticed other kids around her who either had a severe illness or were hurt in serious accidents, and she wanted to help them. “I was in a cast, but I was ambulatory, so I would walk down the hall and help feed the little kids, and that was really a big experience for me. At the age of 12, I was young and very impressionable – I realized I wanted to help,” Gay said. Her work responsibilities with the school system included a lot of educational testing, assessing and managing whether students were eligible for special education programs. She worked in school psychology for 35 years before retiring about three years ago. Gay said it feels great to be retired, but sometimes she still feels like she is catching her breath from the years of dedication to the school system.

“It was a pretty intense role for many years. We did an intellectual academic assessment and then a psychological assessment for each child,” she said. Howard currently teaches in the architecture department at California Polytechnic State University. They currently live in San Luis Obispo, California, north of Santa Barbara near the central coast. They relocated there 33 years ago after both receiving job offers in that area.

Retiring has left Gay with more time to do the things she enjoys most, like hiking and traveling. “San Luis Obispo is a very natural area. There are some beautiful mountain trails around near the countryside. And it’s usually a perfect temperature there. You can hike along the beach or go hiking in the hills. It’s really pretty varied.” Gay said that although the water is gorgeous to look at there, it’s very often too cold to swim in. Having grown up swimming in the Gulf of Mexico, she said it’s very difficult to plunge into 59-degree water. “I guess we are spoiled from the warm water here. There is a big wine region where we live, so it’s fun to take tours of that vineyard. And when the spring rains come, the mountains are covered in flowers – it’s so pretty.”

Gay sad the California coast is unique, because people surf and ride horses on the beach at the same time, and she had the photos on her phone to prove it. Gay and Howard visit Boca Grande every summer for a couple of weeks. Her mom still lives in Fort Meade, so the annual trip here turns into more of a family reunion. Sometimes they come to the island at Christmas time as well. “The summer is hot here, but it’s also very quiet. We like that. Usually there are just local people spending time at the beach.”

After 36 years of marriage, Gay said the key to a successful partnership is being good friends and enjoying the same hobbies. The couple said their main hobby is collecting shells. “My mom and my aunt would teach us the names of all the kinds of shells we’d find, and I think that’s what got me so interested.”

Gay and Howard were diving with masks in about four feet of water toward the south end of the island when she noticed a small part of the top of a brightly speckled shell. She knew right away what it was. Using another shell she was holding in her other hand, she dug the junonia out of the sand and brought it to the surface to get a closer look. And sure enough, the eye-catching white and bright, orange-spotted shell was in perfect condition. She started screaming, and Howard came over to see what was happening. “It’s really rare, and even more so now that both of us have each found one here,” Gay said.

Gay said they don’t do much home decorating with the shells, although they do have special ones placed in bowls around the house. They make it a habit to ship a box of shells back home each time they visit the island. Gay and Howard are both certified scuba divers. They recently took a trip to the Cayman islands, where they went diving. Gay said that as Boca Grande Pass changes from dredging and tidal events, that can affect the quality of shelling on local beaches, but she said she still finds some pretty unusual ones here. “We’ve noticed the sand bars have moved around and shifted a bit, but it’s still fun to go shelling every time we are here.”

The next rare shell she is hoping to find on the island is a Lion’s Paw. “They are very big, orange, interesting-looking shells.” She found a huge two-foot horse conch recently just a few yards from shore near the sand bar. “It was very bright, and it was covered with barnacles, so it was obviously a really old shell the animal was living in. I put it right back down after getting a closer look.” Gay is an avid singer and belongs to a singing group in California. “I’m in a little song circle with a few other women … we have a lot of fun. We get together and do improvisational singing,” she said. Gay and Howard headed back home to California at the end of June to attend a wedding in San Francisco. They are planning a trip to Vancouver in August to visit some friends. And they’re looking forward to visiting Boca Grande again next year.