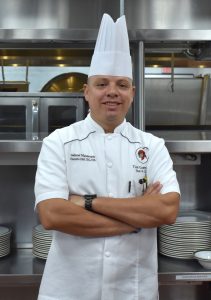 Gabriel Maldonado has been working in a kitchen since he was about six-years-old. His parents owned a small restaurant in Mexico City and he and his four older sisters all learned the business from a very young age.

“We used to slaughter our own animals with our father, and I started cleaning plates when I was seven, and started dicing things with knives by the time I was eight,” he said. “I think that’s what really helped me when I started out my career. In between doing dishes I would help the cooks and chefs chop and dice foods. Within a year I was promoted to the kitchen.”

Gabriel is the new executive chef at The Gasparilla Inn & Club. Before moving to Boca Grande in June, he worked at a golf and country club in Connecticut. The chef moved from Mexico City to Long Island, New York when he was 19 years old, and found a job as a dishwasher, spending most of his career working in country clubs in the New York area. His last position before accepting the job in Boca Grande was at the New Cannon Country Club in Connecticut. Before that he was at Nassau Country Club in Glencove, New York for about six years.

“I think it’s important to change jobs every five or six years or so because it keeps you challenged and you learn new things,” Gabriel said. “My mentor taught me that is about the time you reach a peak, and it’s time to seek new challenges and keep current with the trends.”

Chef Gabriel knew Chef Seth Shipley (former chef at The Inn), and he worked with certified master chef Peter Timmings a few times in the past, so he was already a bit familiar with The Gasparilla Inn & Club. They worked together at the Masters Golf Tournament at the Augusta National Golf Club in Augusta, Georgia.

“My mentor was the director of club operations at Augusta National,” Gabriel said. “I was invited nine years in a row to be involved at the annual two-week event, and I was able to go seven times.”

Chef Gabriel is a certified executive chef and a certified culinary administrator through the American Culinary Federation. Those certifications have to be renewed every five years with continuing education classes to maintain the status.

He attended the French Culinary institute, which is now called the International Culinary Institute in New York City, a private culinary school headquartered in Campbell, California with campuses in New York and San Francisco.

His mentor, John Johnstone, was the person who contacted Gabriel about the executive chef position in Boca Grande.

“John and I worked very well together and he called me about this position when he found out the former chef was leaving, and asked if I’d be interested. He’s also good friends with John Reecher (present manager at The Inn) so he recommended me and helped get my interview scheduled. My other mentor who helped train me is Thomas Sperandeo.”

His responsibilities as executive chef include overseeing the entire culinary operations of kitchen and staff, the hotel, beach club, bakery and The Inlet and Outlet.

“We work together and we try to communicate when we might need assistance, so that it is planned and provided.”

Gabriel said one aspect of his job here that has been challenging has been the purchasing process. As opposed to receiving orders within 24 hours, special request items can take a week to two weeks to get delivered to the island. So depending on what it is and where it is coming from, logistically it can be a challenge.

“If we have a large event coming up, we start planning very early so that everything arrives on time. I think it is very important that everyone works together as a team and helps each other out when necessary. My coming from the bottom and working my way up, I understand everything and no position is better than another. Everybody can wash dishes, scrub a floor or help in some way.”

He said the current kitchen staff is very well trained, and he’s only had to make some small changes and adjustments to make it more efficient.

At The Inn, Gabriel creates the dinner menu, and changes it on a daily basis. He tries to offer a variety of different options every day, while keeping popular staples on the menu.

The breakfast menu stays the same throughout season, there is a buffet, or guests can choose to order a la carte. Lunch is served at the beach club, and dinner is available five nights per week at The Inn dining room right now, and it will be offered seven nights a week as the guest count continues to grow. Room service is available every day.

“It’s a beautiful facility and I think the guests come here for the unique island experience – the view, the beaches, the food – the whole package.”

Gabriel met his wife, Vanessa, while they were working together at a club in Long Island, New York in 2000.

They have two children: Gabriel, 14, and Sophia, 11. They both attend school in Ft. Myers.

“They are both very smart and we want to provide them with the best education we can, for as long as we are able provide it,” he said.

The move from Connecticut to Boca Grande worked out very well, since the kids were out of school in June and the family moved over the summer to get settled in this area.

Gabriel said although it was a quick move, he believes the timing was good and feels his family has adjusted very well to Boca Grande.

“I think they love the change and they feel privileged to experience living on an island,” he said. “My daughter loves collecting shells on the beach, so that’s something we’ve been doing a lot together. And my wife and I love the fact that we no longer have to shovel snow, or drive a long commute to work every day.”

Vanessa is a paralegal, and she’s currently searching for a position in the area. She’s also thinking about going back to school to study accounting.

When Chef Gabriel is not working the very long hours associated with his job, his main hobby is spending time with his family.

“I work so much that when I get a day off, I want to be with my wife and kids.”

He also enjoys going to car shows and quarter mile racing competitions. He eventually would like to do some fishing around the island with his son.

At The Gasparilla Inn & Club, Gabriel leads a culinary staff of about 56 during season. He has an executive pastry chef, an executive sous chef and a chef de cuisine who assist him in overall daily operations, including preparation, production and ordering. There is also a beach club sous chef who is in charge of all the operations at the resort.

Gabriel worked and lived in North Carolina for almost ten years, and he still owns a home there.

Three of his four sisters live in New York and one lives in Mexico. His parents are retired and they split their time between Mexico and New York.

If you would like to enjoy a spectacular meal, make reservations now at the Gasparilla Inn & Club and meet the chef in person.