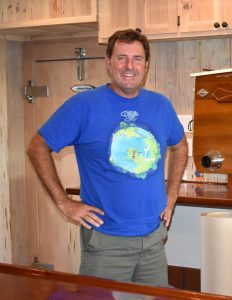 Eric Oberg supervised some significant renovations that were completed over the summer months at Miller’s Dockside and Eagle Grille, located at Boca Grande Marina, where he is the general manager. But by no means is he a new face to our island.

The downstairs bar has been moved from the west side to the east side, and it now has automatic closing windows to keep the establishment cool in the summer and heated in the winter. It will also help protect patrons from the elements.

Eric oversees a team of about 60 staff members who work at the restaurants during peak season in Boca Grande. He has been the general manager for the past eight years.

Eric was born in Chicago, but his parents moved to Miami, Florida when he was just a few years old. He remains a faithful Cubs fan today.

His parents relocated to Sarasota, where Eric attended high school. After he graduated he went on to study at the Culinary Institute of New York.

He returned to Sarasota and worked as a sous chef at Marina Jacks from 1985 though 1996. Then he worked at the Plaza Restaurant on Longboat Key.

Prior to coming out to work in Boca Grande, he worked at The Meadows Country Club in Sarasota. Eric also worked as a chef at The Pink Elephant for six years from 1996 until 2002.

“While I was working in Sarasota, Chef Alfonce (Wiesch- horster) from The Gasparilla Inn invited me to come and work for him,” Eric said. “He said there was an opening at The Pink Elephant, and that’s how I ended up working on the island. The former chef there was also my mentor, so he recommended me to Chef Alfonce.”

Eric left The Pink Elephant to take a position at The Mercabo when it was still a thriving Mercury test center with a corporate conference complex.

That was just before 9/11 happened, and most of the future conferences were cancelled, which ended that opportunity.

Eric met his wife, Patricia, at Jams in Villa Capri, just off the island. They ran the restaurant together for a while.

Patricia is now a registered nurse, and she works at Englewood Hospital.

Eric and Patricia have lived in Rotonda for 17 years.

Harper works at Bonefish Grille in Venice, Stephen is a student at the University of Florida, and Austin works at James Griffith salon here in Boca Grande. She is training to become a licensed hair designer.

Eric’s parents are retired and currently live in Ocala.

Faith was a service dog to one of Patricia’s patients. When the patient’s outlook became terminal, she asked

Patricia to look after Faith, which is how the dog became part of the family.

“I call her the dog extraordinaire – she was trained to sense seizures and low blood sugar levels,” Eric said. “We started fostering her when the lady went to rehab, and she eventually passed and we kept her as part of our family.”

Eric said they’ve had several Labradors in the past, but the mix of shepherd in Faith puts her on a higher level.

“She is just so smart and very intuitive,” he said.

Although Eric puts in many long hours managing the restaurants, when he does have spare time he enjoys golfing and fishing.

He doesn’t usually participate in any of the tarpon tournaments, because that’s when the restaurants are the busiest.

“We are kind of like the epicenter of the tarpon tournaments … whether it is to serve the captains and participants coming off the water or the people who are visiting town to observe,” Eric said. “And we put a lot of thought into that during these most recent renovations. We know that when people come off the water, they’re looking for a little bit of respite in a comfortable atmosphere before they have to go back out.”

The Boca Grande Marina is a full- service marina that can accommodate boats up to 150-feet in length.

Attached to the south side of Miller’s Dockside is a marina store that offers everything from fishing tackle and gear to clothing, sunglasses, jewelry and a variety of souvenirs.

“We try to focus as much as possible on the quality of hospitality we provide,” Eric said. “We are dedicated to our community and our guests. Every year we’re a sponsor in the World’s Richest Tarpon Tournament, and we try to give back to the island.”

The newly renovated bar has the nautical coordinates of the location engraved into the wood just above the draft beers.

Barbecue grills are available at the docks for the boaters who rent a slip. And if guests choose to spend the night on the island instead of sleeping on their boats, The Gasparilla Inn will graciously accommodate them by coming to pick people up, take them to their rooms and then bring them back to the docks in the morning.

“We have a nice relationship with them and all the other businesses on the island” Eric said. “If anyone needs help, we are there for each other.”

Eric is very proud of his staff, and he gives them credit for keeping things running smoothly even at the busiest times.

Jordan, server supervisor, who has been here since day one.”

When asked whom he admires most in life, Eric said it was too difficult to narrow it down to just one person.

“I’d have to say my mother and father, and of course my wife,” he said.

Miller’s Dockside officially reopened on Saturday, October 7 and the Eagle Grille will be opening Thursdays through Sundays for dinner in November.

“Our bread and butter of the operation is downstairs,” Eric said. “We serve guests all day, and the various sporting events bring in a lot of customers, because we have seven big- screen TVs.”

Miller’s Dockside is located at 220 Harbor Drive in Boca Grande. Guests can enjoy marina-themed décor and views of the water and the marina basin. The establishment is open from 11:30 a.m. until 9 p.m.