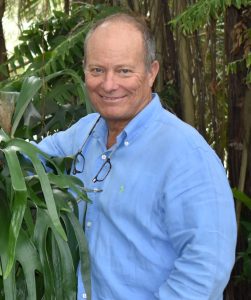 Eric Hronowski has visited many countries, and he continues to have a keen interest in travel. But recently he’s been spending most of his days in Boca Grande. Eric currently co-manages Boca Blooms on Palm Avenue with his wife, Terese.

Exhausted from battling winters in New England, they packed up their home in Newport, Rhode Island and relocated to Ft. Myers in January of 2015.

“One day while I was using the snow blower, I decided the charm of grey skies had worn off long ago,” Eric said.

Eric grew up in Baltimore, Maryland. After high school he attended a local community college and studied theater arts.

“I was interested in working behind the scenes, building the stage and setting up the sound recordings,” he said. “I thought I wanted to be in that business, but it just wasn’t meant to be.”

After college he moved to Boston when he was offered a job at a restaurant in the city.

A few months later, he happened to see a newspaper advertisement looking for crew on a sailboat in the Bahamas, and it quickly caught his attention, since it was the middle of winter up north.

“The owner required the applicants to come and work at his private nursing home, so he could see how different personalities worked together,” Eric said. “We basically had to audition for the position while we did repairs and landscaping on the property.”

Eric was chosen to be a chef on a 65-foot catamaran for one year. He said most of the workers were in their 20s, so they had a good time sailing the boat around that year.

He moved back to Baltimore when his father grew ill.

He found a job working on another large boat as a cook, and the owners stopped at a marina in Newport, Rhode Island while sailing around New England.

“I just fell in love with the place. It’s very special town. So I packed up my car and moved there,” he said.

Within 15 minutes of moving to Newport, he found a job at a small marine supply shop.

Eric was shopping around town one afternoon and    noticed that a new glassblowing shop had opened. He watched the owner through the window as he created the glass items and was so fascinated with the process that he began looking into design classes. However, the cost of the classes was astronomical.

A month later, he noticed that the glass studio owner was hiring, so he applied for the job. He learned the trade and enjoyed a career as a glassblower at Thames Glass shop for more than 22 years.

Some of the handmade pieces created at the shop by students he taught years ago are currently available at Boca Blooms.

One unique gift is the “Message in a Bottle,” which he said is a popular item that sells regularly.

“It makes for a nice wedding or graduation present, or even a Christmas gift,” Eric said. “You can personalize it with a message, and it becomes a nice keepsake.”

Eric said glassblowing is hard work and can be physically painful.

He trained high school students from local trade schools at the prime of the business, and in the 1980s there were nearly 20 employees.

A change in the economy resulted in the studio falling upon hard times, so Eric went to work for a restaurant and marina that was owned by Mrs. Dodo Hamilton in Newport. She had purchased it with the intent of turning it in to a boutique hotel and world-class marina.

Eric was invited to work as a bartender at the resort while it was being renovated. He ended up working as the facilities manager at the club for ten years.

Throughout that process, Eric also worked for the SVF Foundation, a private, nonprofit organization that seeks to preserve rare breeds of livestock by gathering and storing both semen and embryos from the animals through cryopreservation. The organization is the only one of its kind in the nation, and Mrs. Hamilton founded it in 1998.

“It’s a working farm where scientists take rare breeds of cattle and fowl from all around the world, with the goal of preserving the animals,” Eric said.

While working for the foundation, Eric helped build barns, baled hay, painted and did various maintenance projects on the property.

When Eric and Terese relocated to Ft. Myers, Peter Borden asked him to come and help renovate some properties in Boca Grande that were owned by Hamilton. That was before Boca Blooms existed. When Mrs. Hamilton purchased the property on Palm Avenue, Eric renovated the building. As the plans for Boca Blooms moved forward, Eric was asked to manage the store.

Terese came to Boca Grande to help with the opening party for Boca Blooms.

“Mrs. Hamilton liked Terese so much that she asked her to come work at the shop also,” Eric said.

Eric and Terese co-manage the store, and both are on site five or six days each week.

But the four-hour daily commute to and from Ft. Myers quickly became a problem.

They have since found a home in Grove City and are very happy living in the area.

The home Eric and Terese owned in Newport was built in 1740. It was a small home, and Eric added a unit on the back. They utilized that as a self- contained bed and breakfast.

Eric met Terese when he was 18. He was a good friend of her older sister, and when he saw Terese he said it was love at first sight.

“I don’t know if she felt that way, but she was truly stunning and I was just so captivated.”

Eric said he appreciates his position at Boca Blooms because he has the opportunity to spend time in nurseries shopping for various palm trees and other plants.

“I enjoy going to the different stores and finding unusual specimens. I look for one-of-a-kind items to keep diverse options at the store,” he said.

“The biggest challenge is the constant effort to find distinctive and interesting items,” he said.

To browse through some of the handcrafted articles at Boca Blooms, stop by the store located at 411 Palm Ave., or call 964-1111.