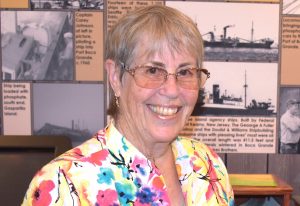 When Elizabeth “Kay” Gibson recently spent some time in Boca Grande, she recalled when she and her husband Charles “Dana” Gibson were two of the first tenants on the second floor in the railroad depot building. At the time, 1979, they owned Jekyll Towing & Marine Services. While the company’s tugboat Jekyll Isle was docked in St. Petersburg, the couple lived in Boca Grande. Dana, who skippered Jekyll Isle on long-distance voyage tows which lasted anywhere from a month to six weeks, flew back and forth to St. Pete out of Rotonda Airport. Kay ran their company’s office and kept a single sideband radio in the laundry room of their home so they could communicate.

“We’d check in with each other every morning and evening, so Dana knew everything was good at home, and I knew he was safe.”

Until her recent return, Kay had not been to Boca Grande for several years, but a certain serendipitous situation brought her back to reunite with old friends at the Caribbean Room in the Temptation Restaurant.

It all started with a box that she and Dana discovered in 2015 in the attic of their home in Maine when they were “downsizing.” The box contained six large red notebooks filled with photos, letters and newspaper clippings dating back to when Dana and Kay lived in Boca Grande.

They shipped the box to Mark Spurgeon, trusting that he would help get the items preserved. Mark brought the box to the Boca Grande Historical Society.

“Mark was our neighbor and one of the first people we met when we first bought a home in Boca Grande Shores,” Kay said. “After he told me about his children and grandchildren, I laughed. I still think of Mark as that kid next door.”

Last May, Boca Grande Historical Society board member Jim Blaha came across the box. Not knowing where it came from, he began sorting through the items and found the Gibsons’ contact information on the internet through Georges River Land Trust, which now owns Gibson Preserve, a 150-acre forever wild park with miles of hiking trails in Searsmont, Maine. Kay and Dana gifted the Preserve to Georges River Land Trust in 1999. The person who answered the phone forwarded Jim’s contact information to Kay, and a new friendship formed just weeks before Dana died in June of this year.

“Dana was really pleased to learn that the files had been found and that they would forever be preserved and safeguarded by the Historical Society.”

Last month, Jim invited Kay to come to Boca Grande and meet the members of the Boca Grande Historical Society and reunite with old friends.

“Jim and Rose Marie (Blaha) were so gracious. When I saw Mark again for the first time in almost 30 years, it was pretty emotional,” Kay said. “Mark’s father, Bill, who shares the same birthday as Dana, albeit a year apart, had been everyone’s phone man during the time we lived here when the island transitioned from phones with five numbers to seven. Of course the word ‘internet’ didn’t exist. It was great to get caught up with Mark and his family.

“It was also very special to again see Capt. Robert Johnson, who was the Boca Grande Ship Channel pilot at the time we first moved to Boca Grande. Robert had learned the piloting trade from his father, Cary, who was a fine writer and who, through his book, has left behind a lot of Boca Grande history.”

Lately, Jim and Rose Marie have been busy organizing the contents of the Gibson notebooks by topics and scanning the individual letters and newspaper clippings. It’s a project that will most likely take months to complete.

“It’s just a treasure trove,” Rose Marie said. “We’re really fortunate that the Gibsons saved all of the information.”

In conversation, Kay remembered standing outside the railroad depot building in 1981, when the last phosphate train left Boca Grande village. She documented the moment with dozens of photographs of Boca Grande’s citizens who all turned out for the event. She and Dana then drove their car all the way up to the north end. Whenever they could see the train, Dana stopped and Kay took more photos until finally the train crossed the last trestle and disappeared onto the mainland. The pictures are now at the History Center on the island. Last summer, while going through some obscure files in Maine, Kay also found the 35 mm negatives and gave them to the Historical Society.

“The photographs have all been scanned and preserved in acid-free containers. Once they’re entered into our online archive database, they’ll be put in storage,” Rose Marie said.

Kay and Dana lived year-round in Boca Grande from 1978 to 1985. They had moved here from Jekyll Island, Georgia.

“We both were born and brought up in New York State,” she said.

Dana came to Boca Grande in the 1930s, when passenger trains were running to the island from Tampa.

He became good friends with some members of the Coleman family.

“He shared stories about how he and Carrington Coleman would go out fishing in the harbor and shoot robins and cook them on sticks,” Kay said. “He compared it to living like Huckleberry Finn.” Dana was about nine years of age at the time.

Kay first came to Boca Grande aboard their 63’ commercial fishing boat, John deWolf II, that Kay and Dana had built at the Nichols Brothers Yard on Whidbey Island in Washington state. They came down the Pacific Coast, through the Panama Canal, north along the coast of Central America and then cleared into Boca Grande, which was still a commercial port.

“That was in 1975. We had been married for a little over a year, and it was my first boat trip ever,” Kay said. “We tied up at the phosphate docks, and that was the first time I set foot on the island. My son Bill was seven at the time, and we had one deckhand with us, a young man from Alaska. We cleared U.S. Customs, then anchored the boat in Charlotte Harbor and took our dinghy into the bayou.”

They were headed to The Gasparilla Inn when the outboard motor conked out. A kind boater towed them to the golf course, where they beached the dinghy, grabbed their sea bags and unannounced, walked over to The Inn to book a room.

“That never could happen today,” Kay said with a laugh. “Today, someone beaching a boat on The Inn’s golf course would probably be arrested for trespassing, but Boca Grande was a very laid-back, idyllic place back then.  It was great; it was really special.”

After moving to Boca Grande in 1979 and living on the island for six years, the couple moved to Maine in 1985. They again became Florida residents, albeit on the east coast, in 2012.

The Gibsons returned to Boca Grande a couple of times, once on their boat Hannah II and once by car to celebrate a special occasion, but especially for Dana, it was never the same place he so fondly remembered from his childhood.

Over the course of their 45-year marriage, Dana wrote four books, Dana and Kay co-authored four others, and Kay published one. All nine books deal with facts of maritime history. Except for “Boca Grande, A Series of Historical Essays,” which Dana wrote in 1982 and which has since been republished by the Boca Grande Historical Society, none are still in print, but copies may still be obtained at abebooks.com.

For their extensive body of work, E. Kay Gibson and Charles Dana Gibson were honored in 2004 with the K. Jack Bauer Award given annually by the North American Society of Oceanic History (NASOH).

An honorarium has been established by NASOH to recognize Dana’s extensive body of work in the field of maritime history. Kay will be on hand when it is presented for the first time in May at NASOH’s annual conference to be held in Pensacola.

A minute or two before Dana died, thinking of all the lives he had touched over his 90 years in so many meaningful ways, Kay told her husband, “You really made a difference.”  For all he did while a resident of Boca Grande, those were prophetic words.

Kay currently lives outside Fort Pierce on North Hutchinson Island and promises to return for another visit next year to see how the “red notebook” project is progressing.